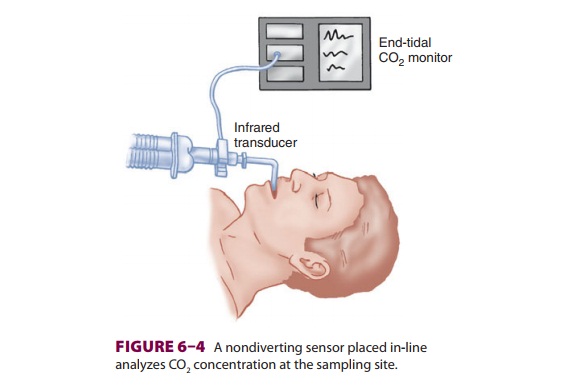 Determination of end-tidal CO2 (Etco2) concentra-tion to confirm adequate ventilation is mandatory during all anesthetic procedures, but particularly so for general anesthesia.

Determination of end-tidal CO2 (Etco2) concentra-tion to confirm adequate ventilation is mandatory during all anesthetic procedures, but particularly so for general anesthesia. A rapid fall of Etco2 is a sensitive indicator of air embolism, a major com-plication of sitting craniotomies. There are no contraindications.

Nondiverting (mainstream) capnographs mea-sure CO2 passing through an adaptor placed in the breathing circuit (Figure 6–4). Infrared light trans-mission through the gas is measured and CO2 con-centration is determined by the monitor. Because of problems with drift, older flowthrough models self-zeroed during inspiration. Thus, they were incapable 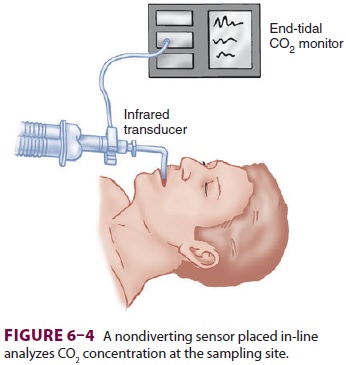 of detecting inspired CO2, such as would occur with a breathing circuit malfunction (eg, absorbent exhaustion, sticking unidirectional valves). The weight of the sensor causes traction on the tracheal tube, and its generation of radiant heat can cause skin burns. Newer designs address these problems.

Diverting (sidestream) capnographs continuously suctions gas from the breathing circuit into a sample cell within the monitor. CO 2 concentration is deter-mined by comparing infrared light absorption in the sample cell with a chamber free of CO2. Continuous aspiration of anesthetic gas essentially represents a leak in the breathing circuit that will contaminate the operating room unless it is scavenged or returned to the breathing system. High aspiration rates (up to 250 mL/min) and low-dead-space sampling tubing usually increase sensitivity and decrease lag time. If tidal volumes (Vt) are small (eg, pediatric patients), however, a high rate of aspiration may entrain fresh gas from the circuit and dilute Etco2 measure-ment. Low aspiration rates (less than 50 mL/min) can retard Etco2 measurement and underestimate it during rapid ventilation. New units autocalibrate, but older units must be zeroed to room air and against a known CO2 concentration (usually 5%). Diverting units are prone to water precipitation in the aspiration tube and sampling cell that can causeobstruction of the sampling line and erroneous readings. Expiratory valve malfunction is detected by the presence of CO 2 in inspired gas. Although inspiratory valve failure also results in rebreathing CO2, this is not as readily apparent because part of the inspiratory volume will still be free of CO 2, caus-ing the monitor to read zero during part of the inspi-ratory phase.

Other gases (eg, nitrous oxide) also absorb infrared light, leading to a pressure-broadening effect. To minimize the error introduced by nitrous oxide, various modifications and filters have been incorporated into monitor design. Capnographs rap-idly and reliably indicate esophagealintubation—a common cause of anesthetic catastro-phe—but do not reliably detect bronchial intuba-tion. Although there may be some CO2 in the stomach from swallowing expired air, this should be washed out within a few breaths. Sudden cessation of CO2 during the expiratory phase may indicate a circuit disconnection. The increased metabolic rate caused by malignant hyperthermia causes a marked rise in Etco2. 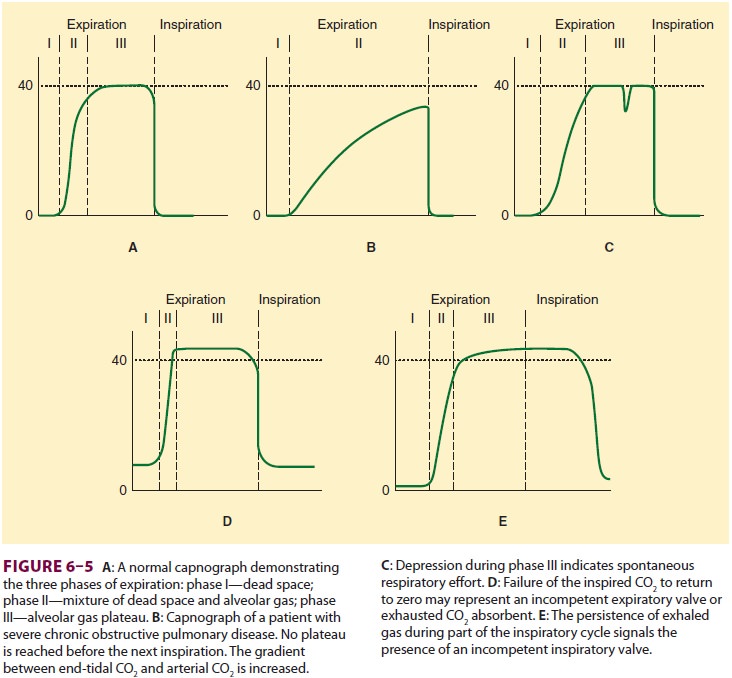