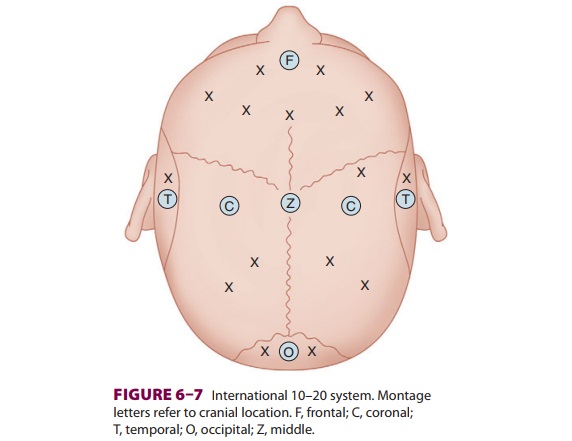 The electroencephalogram (EEG) is occasionally used during cerebrovascular surgery to confirm the adequacy of cerebral oxygenation.

The electroencephalogram (EEG) is occasionally used during cerebrovascular surgery to confirm the adequacy of cerebral oxygenation. Monitoring the depth of anesthesia with a full 16-lead, 8-channel EEG is not warranted, considering the availability of simpler techniques. There are no contraindications.

The EEG is a recording of electrical potentials gen-erated by cells in the cerebral cortex. Although standard ECG electrodes can be used, silver disks containing a conductive gel are preferred. Platinum or stainless steel needle electrodes traumatize the scalp and have high impedance (resistance); how-ever, they can be sterilized and placed in a surgi-cal field. Electrode position (montage) is governed by the international 10–20 system (Figure 6–7). Electric potential differences between combinations of electrodes are filtered, amplified, and displayed by an oscilloscope or pen recorder. EEG activity occurs mostly at frequencies between 1–30 cycles/ sec (Hz). Alpha waves have a frequency of 8–13 Hz and are found often in a resting adult with eyes closed. Beta waves at 8–13 Hz are found in con-centrating individuals, and at times, in individuals under anesthesia. Delta waves have a frequency of 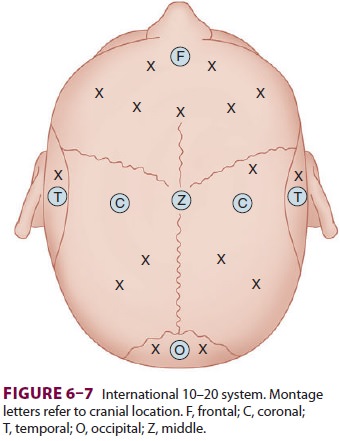 0.5–4 Hz and are found in brain injury, deep sleep, and anesthesia. Theta waves (4–7 Hz) are also found in sleeping individuals and during anesthesia. EEG waves are also characterized by their amplitude, which is related to their potential (high amplitude, >50 microV; medium amplitude, 20–50 microV; and low amplitude, <20 microV). Lastly, the EEG is examined as to symmetry between the left and right hemispheres.

Examination of a multichannel EEG is at times performed during surgery to detect areas of cerebral ischemia, such as during carotid endarterectomy as well as during epilepsy surgery. Likewise, it can be used to detect EEG isoelectricity and maximal cere-bral protection during hypothermic arrest. The strip chart EEG is cumbersome in the operating room, and often the EEG is processed using power spec-tral analysis. Frequency analysis divides the EEG into a series of sine waves at different frequencies and then plots the power of the signal at each fre-quency, allowing for a presentation of EEG activity in a more manageable way than reviewing the raw EEG (Figure 6–8). 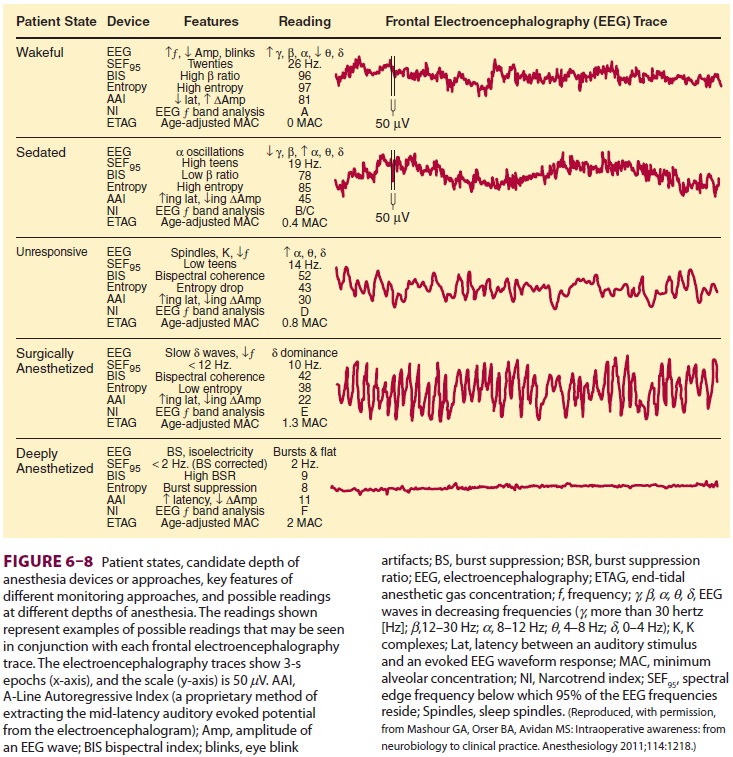 During inhalational anesthesia, initial beta acti-vation is followed by slowing, burst suppression, and isoelectricity. Intravenous agents, depending on dose and drug used, can produce a variety of EEG patterns.

To reduce the incidence of anesthesia aware-ness, devices have been developed in recent years that process two-channel EEG signals and create a dimensionless variable to indicate wakefulness. Bispectral index (BIS) is most commonly used in this regard. BIS monitors examine four components within the EEG that are associated with the anes-thetic state: (1) low frequency, as found during deep anesthesia; (2) high-frequency beta activation found during “light” anesthesia; (3) suppressed EEG waves; and (4) burst suppression.

Other devices attempt to include measures of spontaneous muscle activity, as influenced by the activity of subcortical structures not contribut-ing to the EEG to further provide an assessment of anesthetic depth. Various devices, each with its own algorithm to process the EEG and/or incorporate other variables to ascertain patient wakefulness, may become available in the future (Table 6–1). 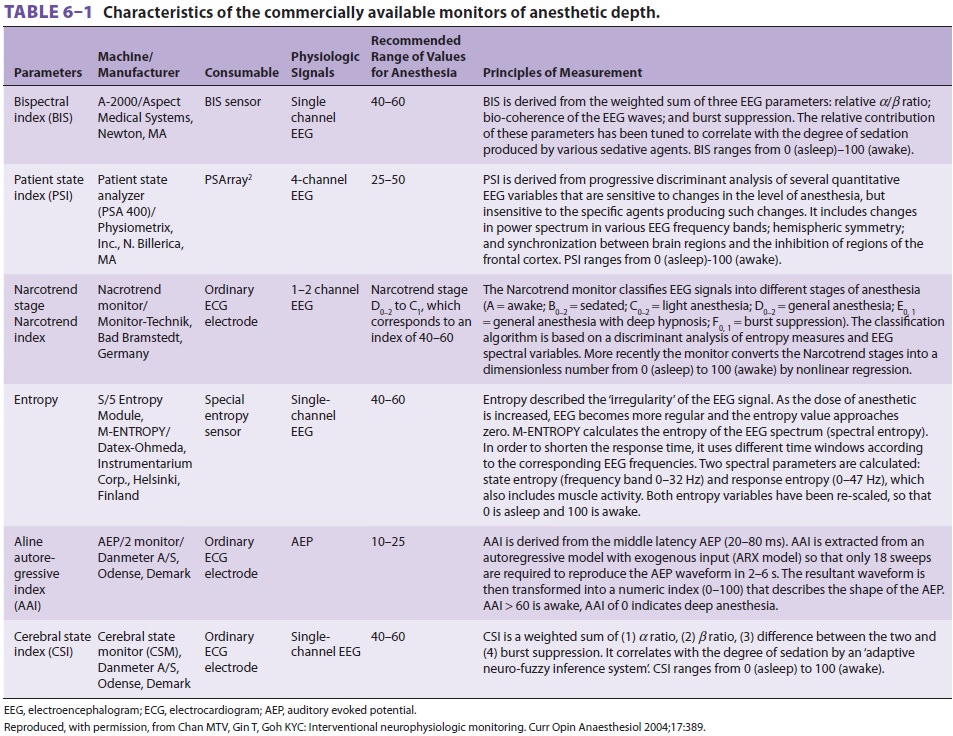 Controversy still exists as to the exact role of processed EEG devices in assessing anesthetic depth. Some studies have demonstrated a reduced awareness when these devices were used, whereas other studies have failed to reveal any advantage over the use of inhalational gas measurements to ensure a minimal alveolar concentration of anes-thetic agent. Because individual EEG responsiveness to anesthetic agents may be variable, EEG monitors to assess anesthesia depth or to titrate anesthetic delivery might not always ensure an absence of wakefulness. Moreover, many monitors have a delay, which might only indicate a risk for the patient being aware after he or she had already become conscious (Table 6–2).

To perform a bispectral analysis, data measured by EEG are taken through a number of steps (Figure 6–9) to calculate a single number that cor-relates with depth of anesthesia/hypnosis.

BIS values of 65–85 have been advocated as a measure of sedation, whereas values of 40–65 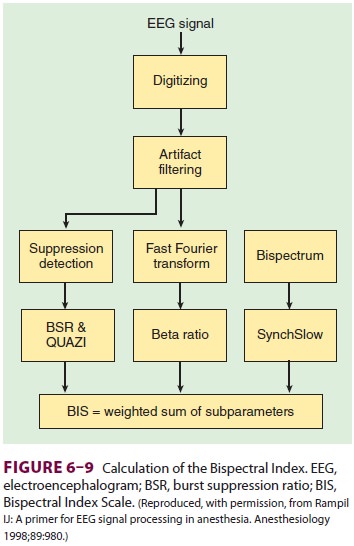 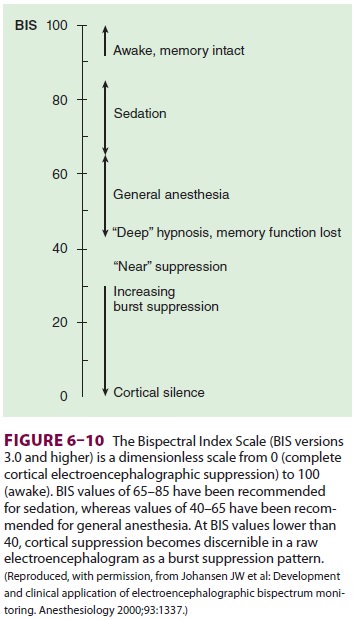 have been recommended for general anesthe-sia ( Figure 6–10). Bispectral analysis may reduce patient awareness during anesthesia, an issue that is important to the public.

Many of the initial studies of its use were not prospective, randomized, controlled trials, but were primarily observational in nature. Artifacts can be a problem. The monitor, in and of itself, costs several thousand dollars and the electrodes are approxi-mately $10 to $15 per anesthetic and cannot be reused.

Some cases with awareness have been identified as having a BIS of less than 65. However, in other cases of awareness, either there were problems with the recordings, or awareness could not be related to any specific time or BIS value. Whether this moni-toring technique becomes a standard of care in the future remains to be seen, and studies are ongoing.

Detection of awareness often can minimize its consequences. Use of the Brice questions during postoperative visits can alert anesthesia providers of a potential awareness event. Ask patients to recall the following:

What do you remember before going to sleep?

What do you remember right when awakening?

Do you remember anything in between going to sleep and awakening?

Did you have any dreams while asleep?

Close follow-up and involvement of men-tal health experts may avoid the traumatic stress that can be associated with awareness events. Increasingly, patients are managed with regional anesthesia and propofol sedation. Patients undergo-ing such anesthetics should be made aware that they are not having general anesthesia and might recall perioperative events. Clarification of the techniques used may prevent patients so managed from the belief that they “were awake” during anesthesia.