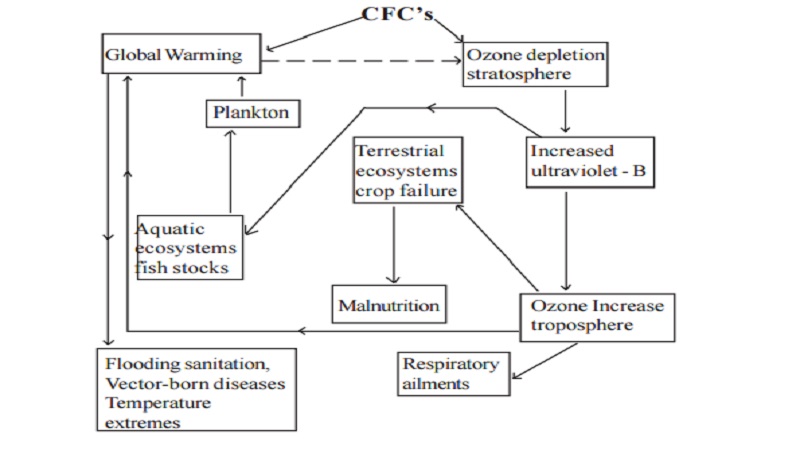 The simple technique is to preserve trees and plants more. Trees, take up carbon-dioxide, break it down in photosynthesis, and store carbon in new wood. It need massive reforestation. Carbon-dioxide can also be sequestrated directly into deep ocean water or into oil wells or some aquifer form which it cannot escape.

Usage of alternate fuels such as nuclear energy, solar power, wind power and hydrogen fuel cells which emit no greenhouse gases are being considered.

Ozone as a natural sun block

In the stratosphere, small amount of ozone are constantly being made by the action of sunlight on oxygen. At the sametime, ozone is being broken down by natural processes. The total amount of ozone usually stays constant because its formation and destruction occur at about the same rate. But unfortunately human activity has recently changed that natural balance. Some manufactured substances such as chloroflurocarbons and hydrochloroflurocarbons can destroy stratosphere ozone much faster than it is formed.

Ozone loss was first detected in the stratosphere over the Antarctic. The part of the atmosphere where ozone is most depleted is referred as ' Ozone hole' but it is not a real hole just a vast region of the upper atmosphere where there is less ozone than elsewhere.

Ozone-poor air can spread out from the Polar regions and move above other areas. In addition, direct ozone depleted are is also slowly increasing.

Reasons for the Antarctic Ozone hole:

If the ozone is depleted more ultraviolet radiations (especially ultraviolet B (UVB) will reach the earths surface.

Effect on plants:- will affect crop yield and forest productivity.

Effect on animals:- will cause damage to fish larvae and other small animals

2.  Production, use and emission of ozone - depleting chemicals should be controlled.

3.Recycling of these chemicals should be increased.

4.Servicing of refrigerators and air-conditioners should be regulated.

5.Refrigirants should be recaptured and used.