In the preceding an attempt has been made to summarize the culture practices relating to the major groups of finfish which contribute substantially to aquaculture technologies and production.

In the preceding an attempt has been made to summarize the culture practices relating to the major groups of finfish which contribute substantially to aquaculture technologies and production. As mentioned earlier, there are several other species which are cultured on a small scale in limited areas or which have shown potential to become important aquaculture species in the near future. Among the first category are the murrels (or snake-heads) and gouramis of Asia, the groupers and rabbitfish of the Indo-Pacific and Middle East regions and the turbot of Western Europe. This section deals briefly with the culture practices of the above-mentioned groups.

Besides these, the South-American species of the genus Colossoma and the Florida pompano (Trachinotus carolinus) have received considerable attention from aquaculturists, although commercial-scale production has yet to be developed. The cod (Gadus morhua) and the halibut (Hippoglossus hippoglossus) are being intensively investigated in North European countries, especially Norway. Though the main focus of attention is to mass-produce young cod for enhancing natural populations, small-scale rearing to market size in captivity has been attempted with encouraging results. Though much more experimental work is required, it has been possible to propagate cod and halibut artificially and rear the larvae to juvenile stages.

Some of the pioneering work on marine fish cultivation was focused on the flat fish plaice (Pleuronectes platessa) and sole (Solea solea). Techniques of controlled reproduction, larval rearing and grow-out have been tried with considerable success. However, commercial farming of these species is at present considered not economically attractive because of the low market value of plaice and the slow growth rate and problems of feeding sole.

Two groups of species that are presently cultured and of importance in restricted areas are the pufferfish (Fugu rubripes and F. vermicularis) and the sturgeons. The pufferfish are aspeciality seafood only in Japan, Korea and China and are of limited interest elsewhere. Artificial propagation and larval rearing of pufferfish are well advanced and marketsized (800 g) fish are produced in ponds and cages, fed on trash fish.

The sturgeons are of special importance as food fish and as a source of the high-valued caviar. Economically important species of stur-geons have been reproduced in hatcheries and young ones are released every year to enhance natural populations that have been greatly reduced by overfishing and environmental changes. However, small-scale culture of some species is undertaken in the former USSR and other East European countries. The sterlet (Acipenser ruthenus) is considered a suitable fish for polyculture in carp ponds with adequate water flow and aeration. The sterlet is benthophagous, feeding on chironomids and oligochaetes, but can be grown on artificial feeds containing about 40 per cent protein. The hybrids of beluga (Husohuso) and the sterlet are preferred for mono-culture in ponds and pens because of their hardiness and adaptability (fig. 24.1). 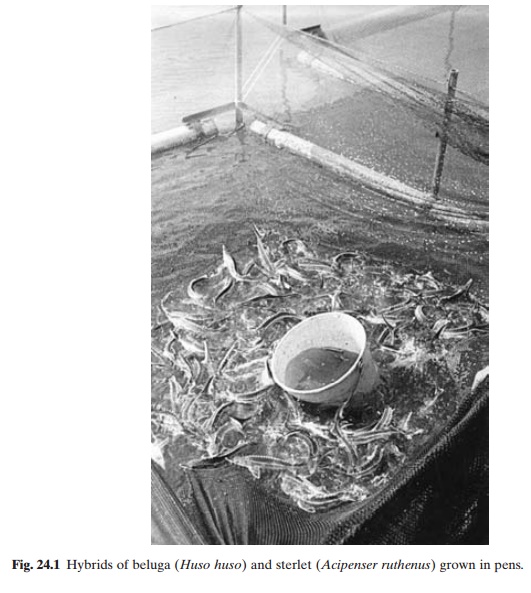 While pond culture is carried out in the southwestern part of the former USSR, pen culture is practised in the bays of the Baltic sea and parts of the Azov sea. Since growing seasons are restricted to five to eight months, the fingerlings usually take two growing seasons to reach the market size of

Experimental and pilot scale sturgeon culture have also been reported from France, California (USA) and Italy. Experimental culture of the Siberian sturgeon (Acipenserbaeri) has been reported from France, wherefingerlings imported from the former USSR were raised in concrete ponds on artificial diets containing 44 per cent protein at temperatures ranging from 16 to 18°C. By the second year they grew to a weight of 1.8 kg and by the third year to an average weight of 2.65 kg. 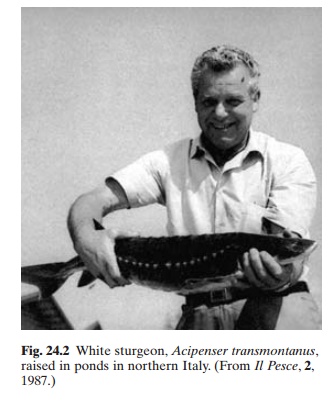 Hatchery-produced white sturgeon, A. transmontanus, has been experimentally grown intanks in California in temperatures in the range 12–20°C, on a 40 per cent pelleted trout feed. The market size of approximately 1 kg body weight was reached in 18 months. The white sturgeon imported from California is now established in pilot commercial farms in North-ern Italy (fig. 24.2). Larvae are raised in tanks fed with specially formulated aromatic feed. Large concrete tanks are used for grow-out. The water temperature is regulated from an initial 23–24°C down to 18–20°C as they reach adult size.They grow rapidly in the tanks, reaching 200–300 g in six to seven months, and 1 kg by the end of the first year. By the end of the second year they weight about 2–3 kg and in three years about 5 kg. In Italy the 5 kg size is considered to be the best for marketing, because of the texture and quality of its flesh. Since the growth rate during the third year is more rapid, a three-year cycle of culture has been recommended. As predicted a decade ago, the white sturgeon is now farmed commercially in Italy. Agrottica Lombarda and Troticoltura Santa Cristina snc di Francesco Bresciani & C. are two major companies involved in breeding and commercial sturgeon farming (A. Lovatelli, personal communication).