Groupers belonging to the genus Epinephelus (family Serranidae) are highly-priced fish in the Indo-Pacific, Middle East and Caribbean regions. Among the several species of the genus, the most important for aquaculture are the estuarine or greasy grouper E. tauvina.

Groupers belonging to the genus Epinephelus (family Serranidae) are highly-priced fish in the Indo-Pacific, Middle East and Caribbean regions. Among the several species of the genus, the most important for aquaculture are the estuarine or greasy grouper E. tauvina (fig. 24.7). It is a hardy species which can stand rapid changes in salinity between 2.5 and 45.5ppt. The optimum salinity is reported to be 15–26 ppt. It is carnivorous in feeding habits and feeds on smaller fish and shrimps. Juveniles feed onAcetes and mysid shrimps in nature. It spawnsthroughout the year, probably with a peak in the wet months. The red grouper, E. akaar, which has habits very similar to E. tauvina, is the important species for culture in Hong Kong.

One of the major problems in the controlled reproduction of the species is that it is a protogynous hermaphrodite. Like other groupers, it matures as a female but becomes a male with advance in size and age. Fish of 45–50 cm length mature as females, while fish of more than 74 cm weighing more than 11 kg become males and develop ripe testes. An intersex condition can be found in fish of length 66–72 cm, with transitional gonads containing male and female gonadal tissues.

Commercial grouper culture is carried out in floating cages on a small scale in Malaysia, Singapore and Hong Kong. Experimental culture has been attempted in Kuwait. 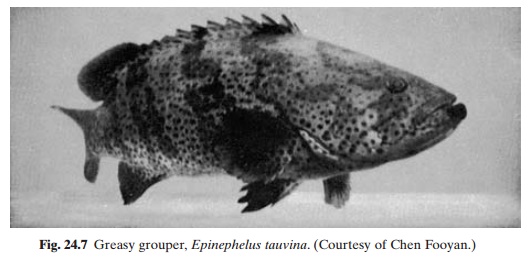 Although it is reported that mature spawners caught from the wild have been observed to spawn in captivity (Hussain et al., 1975) and accelerated sex-reversal and induced spawning have been achieved experimentally (Chen etal., 1977), wild fry are still used for cagefarming. Fry measuring 3.5–5 cm are available during the north-east monsoon and fishermen collect them with small seines and transport them for sale to fish culturists.

Observations seem to indicate that a female E. tauvina will take more than five years tobecome a functional male. By oral administration of methyltestosterone incorporated into feeds three times a week over a period of two months, at a dose of 1 mg per/kg body weight, two- to three-year-old fish yield milt on induced breeding (Chen et al., 1977). Induced spawning of three-year-old females and sex-reversed males has been achieved by injection of HCG and pituitary gland extract from chum salmon or white snapper. Complete ovulation was also obtained by a single injection of 5000 IU HCG. The fertilized eggs can be hatched in tanks within 23–25 hours at a temperature of 27°C. Spawning can be carried out throughout the year, depending on the stage of gonadal development. The larvae metamorphose into juveniles of around 25 mm length in about 33 days. Fifty-day-old juveniles measure up to 70 mm in length.

The red grouper has also been induced to spawn in captivity and the larvae reared under experimental conditions, following more or less the same techniques as employed for the estu-arine grouper.

Wild fry or fingerlings are initially held in hapas for a month or more. Hapas measuring 2 x 2 x 2 m are stocked at the rate of 400–600 advanced fry or fingerlings. When they have reached lengths of 12–15 cm, they are transferred to nursery cages (5 x 5 x 3 m), each holding about 1100 fish, and after about 2–3 months they are transferred to production cages. The cages used are of the floating type, usually made of polyethylene netting supported by a wooden frame-work. The cages are kept afloat with metal or plastic drums and anchored with concrete blocks. Generally, nursery cages have a mesh size of about 2.5 cm and production cages have a mesh size of 2.5–5.0 cm, for growing fish to a market size of 50–75 cm.

In hapas the fry and fingerlings are fed with mysids and small shrimp after a couple of days of acclimatization. Trash fish form the main feed in nursery and production cages, and they are minced or chopped to suit each size group. Finely minced fish can also be used for feeding fry in hapas. Fish in hapas are fed at 10 per cent of body weight daily and those in nursery cages at about 8 per cent of body weight. Feeding rate in the production cages is 5 per cent of body weight and the conversion ratio is around 1 : 4.5 (wet weight). The estuarine groupers attain a market size of about 800 g within about six months and two crops are raised every year.

As the culture of the red grouper in Hong Kong starts with advanced fingerlings, they are stocked directly in production cages. A 4 x 4 x 3 m cage is generally stocked with 800 finger-lings of a total weight of about 120 kg. They are fed with trash fish at a rate of 3 per cent of body weight in summer and half that in winter.As the fish grow in size the stock is thinned and transferred to additional cages. In about four months they reach weights of 300–340 g, and in about six months a marketable size of 500 g each. Some fish are left to grow to a size of 1 kg.

While monoculture of groupers is generally practised, in cages the red grouper is culturedtogether  with  sea-bream  (black  sea-bream, Mylio   macrocephalus     and red      sea-bream, Pagrus major). This is to utilize the feed leftuneaten by the grouper and to prevent water pollution due to decaying feed.

The common disease encountered in captive groupers is vibriosis, caused by Vibrio anguillarum, commonly referred to as ‘red boildisease’, characterized by inflammation, haemorrhage and ulceration of skin and musculature. Oral administration of the antibiotic oxytetracycline hydrochloride, incorporated in the diet at the rate of 50–60 mg/kg body weight daily for the first two days, and half that for another five days, has been reported to be effective in controlling the disease. Another less common disease of groupers is gill infestation by the monogenetic trematode Diplectanum sp. A daily bath in 70 ppm formalin for half an hour for a period of three to four days is reported to be effective. Infection by the protozoan parasite Cryptocaryon irritans causes loss of scales and skin, especially in the head region. The usual treatment is a bath in 200 ppm formalin for half to one hour.