Two- to three-year-old female turbot (of 2 kg weight) have been observed to reach sexual maturity and spawn in the wild from May to August. Males reach maturity in the second year (1 kg body weight).

Two- to three-year-old female turbot (of 2 kg weight) have been observed to reach sexual maturity and spawn in the wild from May to August. Males reach maturity in the second year (1 kg body weight). The annual fecundity is about a million eggs per kg body weight. The diameter of the eggs varies from 0.9 to 1.2 mm. Mature fish will spawn naturally in tanks. Circular indoor tanks up to 2.7 m3 in size, supplied with warm water and continuous high-intensity illumination (up to 3000 lux), have been successfully used for spawning and larval rearing. The size and colour of the tanks do not seem to have any significant effect. Eggs and milt have also been obtained by manual stripping and artificial fertilization has been achieved. Through proper management of brood stock, it is now possible to produce eggs all year round. Temperature is maintained between 10 and 15°C, and the photoperiod is adjusted to obtain spawning at any time of the year. The eggs are incubated at about 12°C in filtered sea water treated with antibiotics. Newly hatched larvae are reared at densities of 30–45 larvae per , in 60–450 tanks. Temperatures between 18 and 20°C are maintained with 90 per cent water exchange every day.

The comparatively small size of turbot hatchlings (3.11 mm length and 0.10–0.15 mg weight) makes it necessary to handle them with special care and to feed the right sized live foods to obtain reasonable survival rates. The rotifer Brachionus plicatilis and nauplii and metanauplii of the brine shrimp Artemia salina are the most commonly used larval foods. It has been suggested that the algae used to feed the rotifer affect the growth and survival of the larvae

(Howell, 1979). When fed on Isochrysis galbana rather than Dunaliella tertiolecta, the larvae grew better and mortality was lowered. From the first day of hatching to about the eighth day, Brachionus is the preferred food; Artemia nauplii are then added and the rotifer reduced, usually terminating by about the eleventh day. Naupliar feeding is continued until the larvae develop into metamorphosed juveniles at a size of 25–30 mm in about 30–40 days. From about the eighteenth day, larger metanauplii of Artemia are used.

The juveniles, weighing 55–105 mg, are weaned to artificial diets in less than two weeks. Dry pellet crumbs (400 mm size) give satisfactory results, but greater success has been achieved by the use of moist pellets, when survival rates have been increased to about 50 per cent. Experimental work (Person-Le Ruyet etal., 1983) seems to show that expanded pelletsenriched with inosine (a chemical attractant) increase food intake during the beginning of the weaning period, but the economics have yet to be determined. After weaning, dry pellets are normally used for feeding, and in about three months after hatching the fry attain a weight of around 2 g. 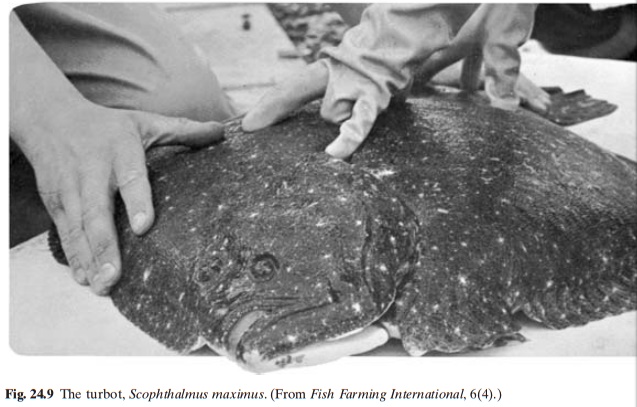