Lung disease resulting from exposure to dusts, vapours and fumes resulting in five basic patterns of disease (see Table 3.18). Most patients with occupational lung disease are entitled to compensation according to their degree of disability.

Diseases of the lung related to exposure to asbestos.

The incidence of asbestos related disease increased dramatically in recent decades but appears to have peaked in the late 1990s, and is expected to gradually decline.

Asbestos is made up of various silicates. It exists naturally as a fibre, and has been widely used for its insulative properties. It was used in sheets in buildings, sprayed on pipes as lagging, in shipbuilding and for boiler insulation. However, it is easily inhaled and the fibres induce a fibrogenic reaction in the lung. The risk of developing pathology from asbestos is dependent on the duration and intensity of exposure, and the type of asbestos (see Table 3.19). 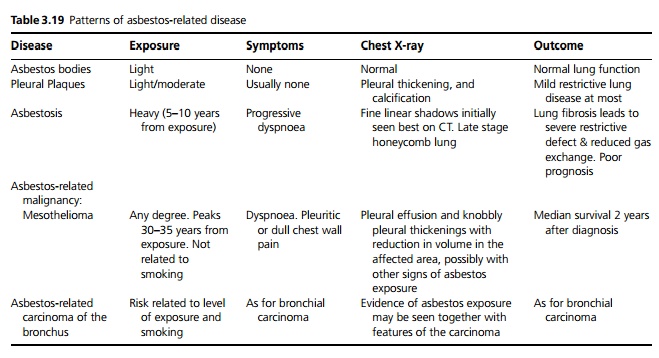 1  Serpentine asbestos (includes white asbestos) is the commonest form. Fibres are long (up to 2 cm) and curly, but only micrometers thick. They are least fibrogenic. It is debatable whether they are carcinogenic, but their use has now been banned in new buildings in the United Kingdom.

2 Amphibole asbestos (including amosite/brown and crocidolite/blue asbestos) fibres are short and straight, this allows them to reach and penetrate the lung parenchyma more easily. They persist in the lung for many years and are very fibrogenic and carcinogenic.

Asbestos bodies: These are long thin asbestos fibres in the lung parenchyma coated with haemosiderin and protein to form brown filaments with a beaded or drumstick pattern. They are the result of macrophages, which surround and attempt to engulf the fibres, but fail to clear them leading to fibroblast proliferation and fibrosis.

Pleural plaques are well-circumscribed elevated plaques of white hyaline fibrous tissue arranged symmetrically on the parietal pleura over the ribs and diaphragm. Calcification is common.

Asbestosis: The lower lobes are usually affected initially, then progressively the midupper lobes. There are fibrotic changes in the interstitium, obliteration of alveoli and then thickened, cystic spaces (honeycomb lung).

Malignant mesothelioma: Thoracoscopic or open lung biopsy may be needed to make the diagnosis. Macroscopically the lesion is thick, may be encapsulated, with interlobar fissures. The tumour may be hard and white or glutinous due to the production of hyaluronic acid. Histological pattern is variable, it may be epithelioid, fibrous or mixed. Local invasion is extensive, 50% metastasise.

Asbestosrelated carcinoma of the bronchus: Asbestosis and cigarette smoking act synergistically to cause a fivefold increase in the risk of developing bronchial carcinoma, which is usually adenocarcinoma or squamous cell carcinoma.

All patients with known asbestos exposure should be advised to stop smoking. Routine surveillance with repeated sputum cytology and chest X-ray does not appear to lead to earlier diagnosis.

Pleural plaques and asbestos bodies require no treatment. Asbestosis is treated as for respiratory failure when this occurs.

Mesothelioma treatment is largely palliative, resection may be attempted in early disease. Radiotherapy is ineffective and chemotherapy regimens are under evaluation.

Patients with bilateral diffuse pleural thickening, asbestosis and (in those with an occupational history or other evidence of asbestos exposure) mesothelioma or carcinoma of the bronchus are entitled to industrial compensation.