The simplest way to assess lung function is from a patient’s history, i.e. the exercise capacity, how far the patient can walk before becoming breathless.

The simplest way to assess lung function is from a patient’s history, i.e. the exercise capacity, how far the patient can walk before becoming breathless. However, for more repeatable objective assessment various tests are used:

Peak expiratory flow (PEF): This is quick and simple. It is measured by asking patients (standing where possible) to take a deep breath to full inspiration, then blow 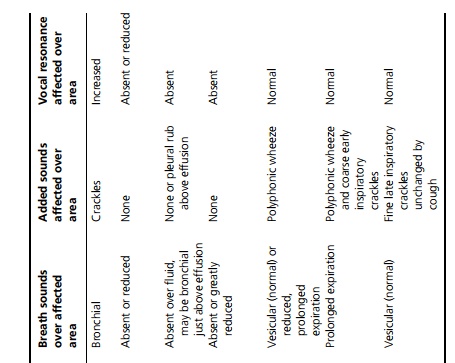 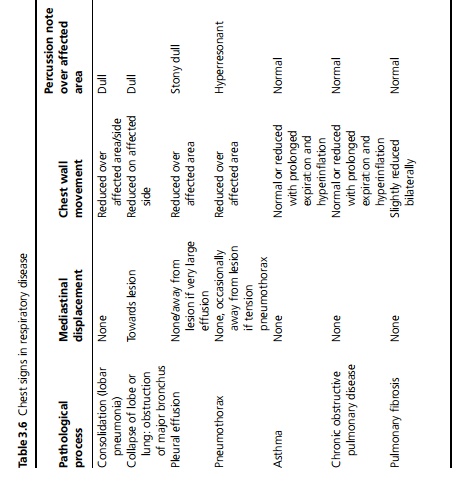 out as hard and fast as they can into a peak flow meter, with a good seal around the tube with their lips. The best of three tries is recorded. This is compared with a predicted value for age, sex and height, although there is considerable individual variation.

It is most useful in monitoring disease patterns, e.g. the day-to-day and diurnal variation in asthma, and for rapid objective assessment and response to treatment. However it is limited in that it only measures the peak expiratory flow, is effort dependent, and can be relatively preserved despite the presence of severe lung disease.

Spirometry: This is now possible with bedside electronic spirometers, which are more portable and convenient than the older Vitalograph models. The patient takes a deep breath to full inspiration, then blows as hard as they can and must continue to blow into the spirometer until the lungs can be emptied no further (≥6 seconds in normal people but may require 15–20 seconds in obstructive airways disease). In reversible obstructive airways disease this gives the graph shown in Fig. 3.1. 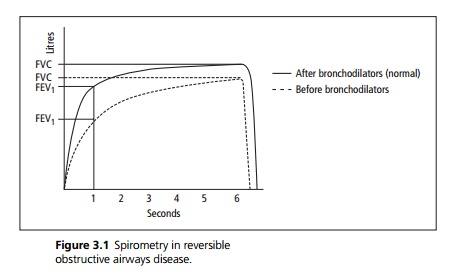 On this (or calculated by the machine) can be plotted the forced expiratory volume in 1 second (FEV1) and the forced vital capacity (FVC). Normal values are related to age, sex and height.

Other useful testing which can be done by the bedside includes pulse oximetry to measure oxygen saturations, exercise testing (timed 6 minute walk with PEF, pulse oximetry and even arterial blood gases pre- and post-exertion).

More comprehensive tests can be performed in the pulmonary function laboratory, but the equipment requires a specialist technician, is expensive, time-consuming and patients with severe chronic airflow limitation find some of the tests difficult to perform, claustrophobic or exhausting.

These include the assessment of the following:

1.     Flow–volume loops: These can localise the site of airflow limitation to extra-thoracic, large airways or smaller airways.

2.     Lung volumes: Tidal volume and vital capacity can be measured. A total body plethysmograph can be used to measure total lung capacity (TLC) and residual volume (RV) (see Fig. 3.2). It is characteristic in emphysema for the TLC and RV to be increased due to air trapping, although the FVC is decreased. In restrictive lung disease, the FVC and TLC are decreased together.

3.     Transfer factor: This measures the diffusing capacity of the lungs across the alveolar-capillary membrane by indirectly measuring the uptake of carbon monoxide  (CO) by haemoglobin. It depends not only on the thickness of the alveolar-capillary membrane but also on the ventilation/perfusion matching (which is commonly abnormal in lung disease) and on lung volumes. Therefore it is corrected for lung volume to be expressed as the transfer coefficient (KCO).

·        It rises in acute pulmonary haemorrhage due to the uptake of CO by blood in the alveoli.