The program of instructions is communicated to the machine tool using a coding system based on binary numbers.

NC part programming consists of planning and documenting the sequence of processing steps 10 be performed on an NC machine. The part programmer must have a knowledge of machining (or other processing technology for which the NC machine is designed) as well as geometry and trigonometry. The documentation portion of par! programming involves the input medium used to transmit the program of instructions to the NC machine control unit (MCU). The traditional input medium dating back to the first NC machines in the 1950s is linch wide punched rape, More recently the use of magnetic tape and floppy disks have been growing in popularity as storage technologies for NC Th ••, advantage. of these input media is their much higher data density.

The program of instructions is communicated to the machine tool using a coding system based on binary numbers. This NC coding system is the low-level machine language that can be understood by the MCU. when higher level languages are used. such as A[Yf (Section 6.5.4), the statements in the program are converted to this basic code. In the present section, we discuss how instructions are written in this NC code to control the relative positions of the tool and workpiece and to accomplish the other functions of the machine tool. 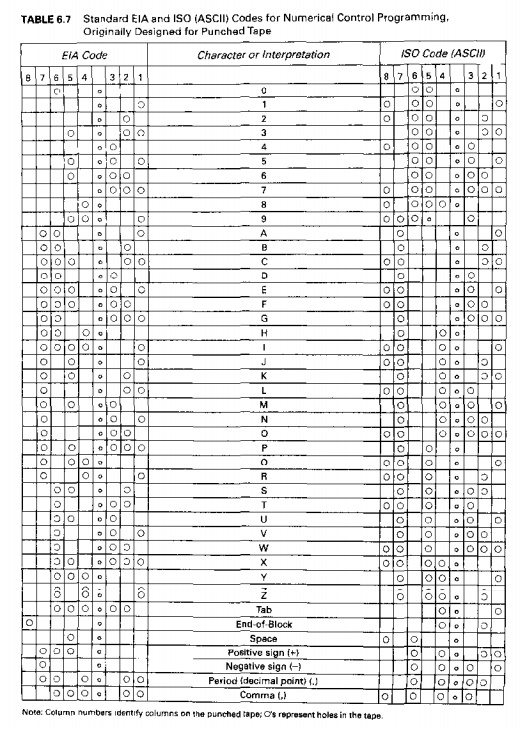 EIA and ISO Coding Standards. In addition to numerical values, the NC coding system must also provide for alphabetical characters and other symbols. Eight binary dig. its are used to represent all of the characters required for NC part programming. There are two standard coding systems currently used in NC: (1) the Electronics Industry Association (EIA) and (2) the International Standards Organization (ISO). The Electronics Industry Association system is known as EIA RS244R The ISO code was originally developed as the American Standard Code for Information Interchange (ASCII) and has been adopted by ISO as its NC standard. The complete listings of EIA and ISO (ASCII) codes for NC are shown in Table 6.7. Many NC controllers are capable of reading either code,

Both EIA and ISO coding schemes were developed when punched tape was the predominant medium fur storing NC part programs. Although punched tape has been largely superseded by more modern media. it is still widely used in industry. if only for backup storage. To ensure the correctness of the punched tape. the eight binary digits in the EIA and ISO codes include a paru» check. Here's how the parity check work, explained here

The difference between the EIA and ISO systems is that the parity check in the ISO code i~ an even number of holes, called an even parity. The EIA system uses an odd parity.Aho. whereas the parity hole is in the fifthdigit position in the 'EIA coding system, it is in the eighth position in the ISO system. These differences can be seen in Table 6.7

How tnstructions Are Formed. A binary digit is called a bit. In punched tape, the values 0 or 1 are represented by the absence or presence of a hole in a certain row and column position (rows run across the tapecolumns run lengthwise along the tape). Out of one row of bits a character is formed. A character is a combination of bits representing a numericaldigit (09), an alphabetical letter (AZ),or a symbol (Table 6.7). Out ofa sequence of characters, a word is formed. A wont specifies a detail about the operation, such as .rposition, ypositlon, feed rate, or spindle speed. Out of a collection of words, a block is formed. A block is one complete NC instruction. It specifies the destination for the move, the speed and feed of the cutting operation. and other commands that determine explicitlywhat the machine tool will do. For example, an instruction block for a twoaxis NC milling machine would likely include the x and vcoordinates to which the machine table should be moved, the type of motion to be performed (linear or circular interpolation), the rota

tional speed of the milling cutler, and the feed rate at which the milling operation should be performed. Imtn.lction blocks arc separated by an endofblock (LOB) symbol (a hole

The essential information in a part program is conveyed to the MCU by means of words that specify coordinates, feeds and speeds, tooling, and other commands necessary to operate the machine tool. Given the variety of machine tool types and the many different companies that build NC machine tools and MCUs, it is no surprise that several different formats have been developed over the years to specify words within an instruction block. These are often referred to as tape formats, because they were developed for punched tapes, More generally, they are known as block formats. At least five block formats have been developed [8]; these are briefly described in Table 6.8, with two lines of code for the drilling sequence shown in Figure 6.12

Words in an instruction block are intended to convey all of the commands and data needed for the machine tool to execute the move defined in the block. The words required for one machine tool type may differ from those required for a different type; for example. turning requires a different set of commands than milling. The words in a block are usually given in the following order (although the word address format allows variations in the order): 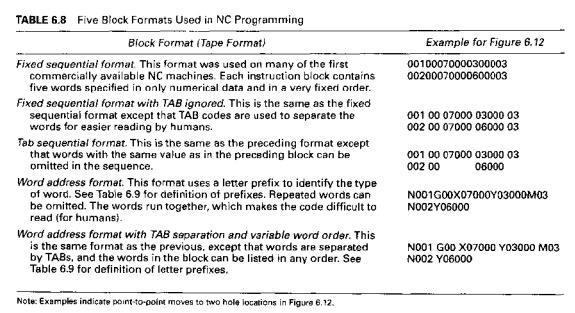 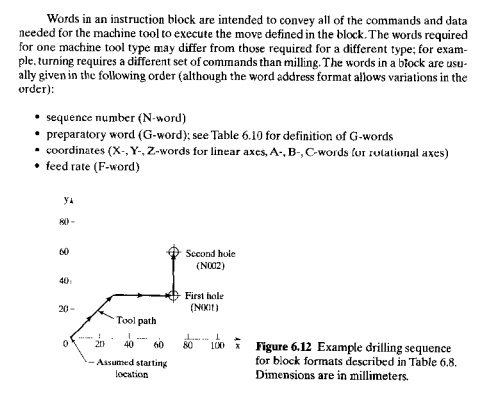 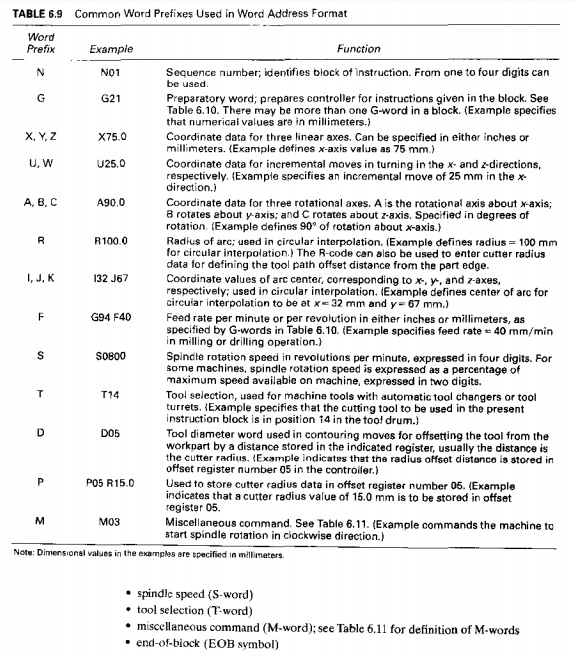 G-words and Mwords require some elaboration. Gwords are called preparatory words. They consist of two numerical digits (following the "G" prefix in the word address for mat) that prepare the MeU for the instructions and data contained in the block. For example, G02 prepares the controller for clockwise circular interpolation, so that the subsequent data in the block can be properly interpreted for this type of move. In some cases, more than one Gword is needed to prepare the MeU for the move. Most of the common Gwords are presented in Thble 6.10.While Gwords have been standardized in the machine tool industrv, there arc sometimes deviations for particular machines. For instance, there are several differences between milling and turning type machines; these are identified in Table 6.10. 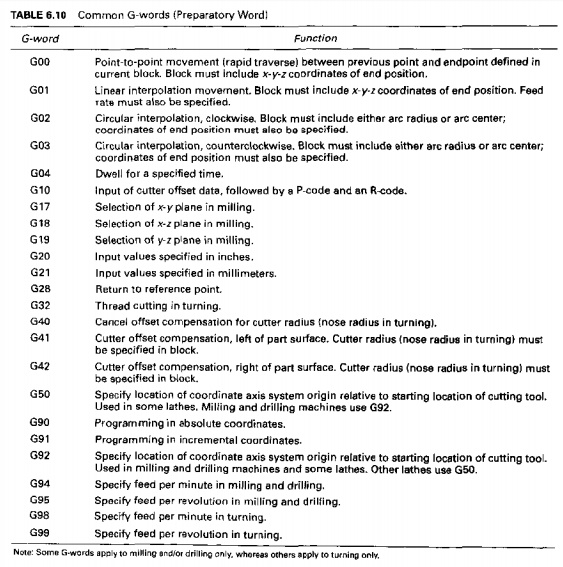 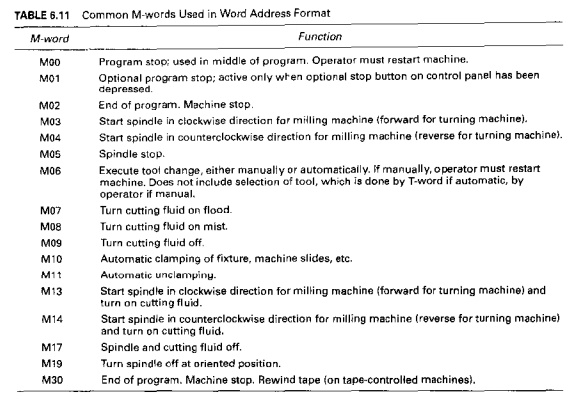 M-words are used to specify miscellaneous or auxiliary functions that an: available on the machine tool. Examples include starting the spindle rotation, stopping the spindle for a tool change, and turning the cutting fluid on or off. Of course, the particular machine tool must possess the function that is being called. Many of the common M-words are explained in Table 6.11. Miscellaneous commands are normally placed at the end of the block.