Manual part programming can be time consuming, tedious. and subject to errors for parts possessing complex geometries or requiring many machining operations

In computer-assisted part programming, the machining instructions are written in English_like statements that are subsequently translated by the computer into the low-level machine code that can be interpreted and executed by the machine tool controller When using one of the part programming languages. the two main tasks of the programmer are: (1) defining the geometry of the workpart and (2) specifying the tool path and operation-sequence

Defining the Part Geometry. No matter how complicated the workpart may appear, it is composed of basic geometric elements and mathematically defined surfaces. Consider our sample part in Figure 6.18. Although its appearance is somewhat irregular, the outline of the part consists of intersecting straight lines and a partial circle. The hole locations in the part can be defined in terms of the .r. and ycoordinates of their centers. Nearly any component that can be conceived by a designer can be described by points, straight Jines, planes, circles, cylinders, and other mathematically defined surfaces. It is the part pro

grammer's task to identify and enumerate the geometric elements of which the part is comprised, Each element must be defined in terms of its dimensions and location relative to

other elements. A few examples will be instructive here to show how geometric elements arc defined. We will use our sample part to illustrate, with labels of geometry elements added as shown in Figure 6.18.

Let us begin with. the simplest geometric element, a point, The simplest way to define a point is by means of its coordinates; for example, 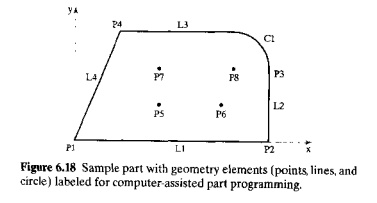 where L1 is the line defined in the statement, and PI and P2 are two previously defined points. And finallv, a circle can be defined by its center location and radius:

where Cl is the newly defined circle. with center at previously defined point PR and radiu's = 30 mm. Our examples are based on the APT language, which offers many alternative ways to define points, lines. circles, and other geometric elements. The APT language is described in Section 6.5.4. and a listing of APT word definitions is provided in the Appendixto this chapter

Specifying Tool Path and Operation Sequence. After the part geometry has been defined, the part programmer must next specify the tool path that the cutter will follow to machine the part. The tool path consists of a sequence of connected line and arc segments, using the previously defined geometry elements to guide the cutter. For example, suppose we are machining the outline of our sample part in Figure 6.18 in a profile milling operation (contouring). We have just finished cutting along surface Ll in a counterclockwise direction around the part, and the tool is presently located at the intersection of surfaces LJ and L2. The following APT statement could be used to command the toolto make a left lurn from Ll unto 12 and to cut along L2:

The tool proceeds along surface L2 until it is tangent to (TANTO) circle C1. This is a continuous path motion command. Pointtopoint commands tend to be simpler: for example, the following statement directs the tool to go to a previously defined point Pu

Other Functions. In addition to defining part geometry and specifying tool path, the programmer must also accomplish various other programming functions, such as:

identifying  the machine  tool on which the job will be performed

Computer Tasks in ComputerAssisted Part Programming. The computer's role in computerassisted part programming consists of the following tasks, performed more or less in the sequence noted: (1) input translation, (2) arithmetic and cutter offset computations. (3) editing, and (4) postprocessing, The first three tasks are carried out under the supervision of the language processing program. For example, the APT language uses a processor designed to interpret and process the words, symbols, and numbers written in APT. Other languages require their own processors. The fourth task, post-processing, re

quires a separate computer program "I he sequence and relationship of the tasks of the part programmer and the computer are portrayed in Figure 6.19.

The part programmer enters the program using APT or some other highlevel part programming language. The input translation module converts the coded instructions contained in the program into computerusable form. preparatory to further processing. In APT, input translation accomplishes the following tasks: (1) syntax check of the input woe to identify errors in format, punctuation. spelling, and statement sequence; 12) assigning a sequence number 10 each APT statement in the program; (3) converting geometry elements into a suitable form for computer processing; and (4) generating an intermediate file called PROFTL that is utilized in subsequent arithmetic calculations.

The arithmetic module consists of a set of subroutines to perform the mathematical computations required to define the part surface and generate the tool path. including compensation for cutter offset. The individual subroutines are called by the various statements used in the part programming language, The arithmetic computations are performed on the PROFIL file. The arithmetic module frees the programmer from the timecunsuming and errorprone geometry and trigonometry calculations to concentrate on issues related to workpart processing. The output of this module is a file called CLFILE, which stands for "cutter location file." As its name suggests. this file consists mainly of tool path data.

In editing. the CLFILE is edited. and a new file is generated called CLDATA. When printed, CLDATA provides readable data on cutter locations and machine tool operating commands. The machine 1001commands can be converted to specific instructions during postprocessing. Some of the editing of CLFILE involves processing of special functions associated with the part programming language. For example, in APT. one of the special functions is a COpy command, which provides for copying a tool path sequence that has been generated in the preceding computations and translating the sequence to a new location. Another APT instruction processed in the editing phase is lRACUT. which stands for "transform cutter locations." This instruction allows a tool path sequence to be transformed from one coordinate system to another, based on matrix manipulation. Other editing functions are concerned with constructing tool paths for machines having rotational axes, such as four and fiveaxis machining centers. The output of the editing phase is a part program in a format that can be postprocessed for the given machine tool on which the job will be accomplished

NC machine tool systems are different. They have different features and capabilities. Highlevel part programming languages, such as APT, are generally not intended for only one machine tool type. They arc designed to be genera] purpose. Accordingly, the final task of the computer in computerassisted part programming is postprocessing, in which the CUller location data and machining commands in the CLDATA file arc converted into lowlevel code that can be interpreted by the NC controller for a specific machine tool. The output of postprocessing is a part program consisting of Gcodes, x, yo, and zcoordinates. S, F,M. and other  functions  in word address  format. The postprocessor is separate from the highlevel part programming language. A unique postprocessor must be written for each machine tool system.