In manual part programming, the programmer prepares the NC code using the lowlevel machine language previously described. The program is either written by hand on a fonn from which a punched tape or other storage media is subsequently coded, or it is entered directly into a computer equipped with NC part programming software, which writes the program onto the storage media. In any case. the part program is a blockbyblock listing of the machining instructions for the given job, formatted for the particular machine tool to be used.

Manual part programming can be used for both pointtopoint and contouring jobs. It is most suited for pointtnpoint machining operations such as drilling. It can also be used for simple contouring jobs, such as milling and turning when only two axes are in valved. However, for complex threedimensional machining operations, there is an advantage in using computerassisted part programming

Instructions in Word Address Format. Instructions in word address torrnat consist of a series of words, each identified by a prefix label. In our coverage, statement, are illustrated with dimensions given in millimeters. The values are expressed in four digits ineluding one decimal place. For example. X020.0 means x = 20,0 rnrn. It should be noted that manv CNC machines use formats that differ from ours, and so the instruction manual for each particular machine tool must be consulted to determine its own proper format. Our format is designed to convey principles and for easy reading.

Tn preparing the NC part program, the part programmer must initially define the origin of the coordinate axes and then reference the succeeding motion commands to this axis system. This is accomplished in the first statement of the part program. The directions of the X, y, and/or aaxes are predetermined by the machine tool configuration, but the origin of the coordinate system can be located at any desired position. The part programmer defines this position relative to some part feature that can be readily recognized by the machine operator. The operator is instructed to move the tool to this position at the beginning of the job. With the tool in position, the G92 code is used by the programmer to define the origin as follows:

where the x,)', and z values specify the coordinates of the tool location in the coordinate system; in effect, this defines the location of the origin. In some CNC lathes and turning centers, the code G50 is used instead of G92. Our .r, y, and z values are specified in millimeters, and this would have to be explicitly stated. Thus, a morecomplete instruction block would be the following:

where  the ti21 code indicates  that  the subsequent       coordinate   values  are in millimeters.

Motions are programmed by the codes 000, GOL 002, and G03. GOOis used for a pointtopoint rapid traverse movement of the tool to the coordinates specified in the command; for example,0

specifies a rapid traverse motion from the current location to the location defined b) the coordinates r = 50.0 mrn, y = 86.5 mill, and z = 100.0 mill. This command would be appropriate for NC drilling machines in which a rapid move is desired to the next hole location. with no specification on the tool path. The velocity with which the move is achieved in rapid traverse mode is set by parameters in the MCV and is not specified numerically in the instruction block. The GOO code is not intended for contouring operations,

Linear interpolation is accomplished by the 001 code. This is used when it is desired for the tool to execute a contour cutting operation along a straight line path. For example, the command

The G02 and G03 codes are used for circular interpolation, clockwise and counterclockwise, respectively. As indicated in Table 6.1, circular interpolation on a milling machine is limited to one of three planes, xy, xz, or yz. The distinction between clockwise and counterclockwise is established by viewing the plane from the front view, Selection of the desired plane is accomplished by entering one of the codes,G17, G IS, or 019, respectively. Thus, the instruction

moves the tool along a clockwise circular trajectory in the x y plane to the final coordinates defined by x = 88 nun and y = 40 mm at a feed rate of 30 mm/min. The radius of the circular arc is 28 mm. The path taken by the cutter from an assumed starting point (x = 40, Y = 60) is illustrated in FIgure 6.13

In a point-to-point motion statement (GOO), it is usually desirable to position the tool so that its center is located at the specified coordinates. This is appropriate for operations such as drilling, in which a hole is to be positioned at the coordinates indicated in the statement. But in contouring motions, it is almo~t always desirable that the path followed by the center of the tool be separated from the actual surface of the part by a distance equal to the cutter radius. This is shown in Figure 6.14 for profile milling the outside edges of a rectangular part in two dimensions. For a threedimensional surface, the shape of the end of the cutter would also have to be considered in the offset computation. This tool path compensation is called the cutter offset, and the calculation of the correct coordinates of the endpoints of each move can be time consuming and tedious for the part programmer. Modern CNe machine tool controllers perform these cutter offset calculations automatically when the programmer uses the G40, G41, and G42 codes. The 040 code is used to cancel the cutter offset compensation.The 041 and G42 codes invoke the cutter offset compensation of the tool path on the left or righthand side of the part, respectively. The left and righthand sides are defined according to the tool path direction. To illustrate, in the rectangular part 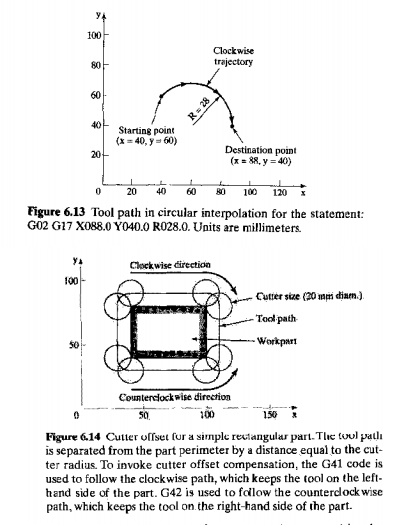 in Figure 6.14, a clockwise tool path around the part would always position the tool on the lefthand side of the edge being cut, so a 041 code would be used to compute the cutter offset compensation. By contrast, a counterclockwise tool path would keep the tool onthe righthand side of the part, so G42 would be used. Accordingly, the instruction for profile milling the bottom edge of the part, assuming that the cutter begins along the bottom left comer, would read:

where D05 refers to the cutter radius value stored in MCV memory. Certain registers are reserved in the control unit for these cutter offset values. The Dcode references the value contained in the identified register. D05 indicates that the radius offset distance is stored in the number 5 offset register in the controller. This data can be entered into the controller in either of two ways: (1) as manual input or (2) as an instruction in the part program. Manual input is more flexible because the tooling used to machine the part may change from one setup to the next. At the time the job is run, the operator knows which tool will be used. and the data can be loaded into the proper register as one of the steps in the getup. When the offset data is entered as a part program instruction, the statement has the form:

SomePart Programming Examples. To demonstrate manual part programming, we present two examples using the sample part shown in Figure 6.1S.The first example is a pointtopoint program to drill the three holes in the part. The second example is a twoaxis contouring program to accomplish profile milling around the periphery of the part. 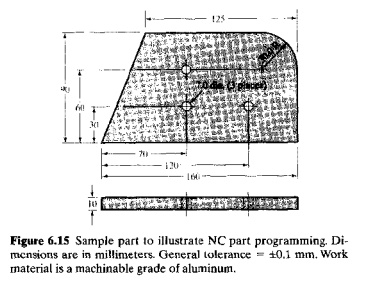 This example presents the NC part program in word address format for drilling the three holes in the sample part shown in Figure 6.15. We assume that the outside edges of the starting workpart have been rough cut (by jig sawing) and are s1Jgbtly oversized for subsequent profile milling. The three holes to be drilled in thi:; example will be used to locate and fixture the part for profile milling in the following example. For the present drilling sequence, the part is gripped in place so that its top surface is 40 rnrn above the surface of the machine tool table to provide ample clearance beneath the part for hole drilling. We will define the X. y.and zaxes as shown in Figure 6.16.A 7.omm diameter drill,oorresponding to the specified hole size, has been chucked in the eNC drill press. The drill will be operated at a feed of 0.05 mm/rev and a spindle speed of 1000 rev/min (corresponding to a surface speed of about 0.37 rn/sec, which is slow for the aluminum work material). At the beginning of the job, the drill point will be positioned at a target point located atx = O,y = So,and z = +10 (axis units are millimeters). The program begins with the tool positioned at this target point. 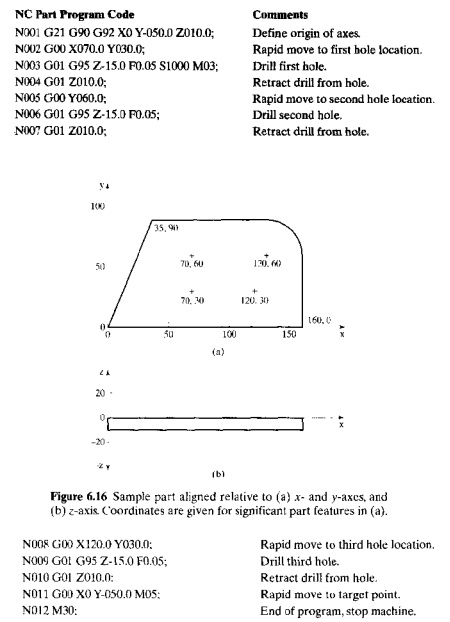 The three holes drilled in the previous example can be used for locating and holding the workpart to completely mill the outside edges without refixturing The axis coordinates are shown in Figure 6,16 (same coordinates as in the pre vious drilling sequence). The part is Iixtured so that its top surface is 40 mm above the surface of the machine tool table. Thus, the ongin of the axis system will be 40 mm above the table surface. A 20mm diameter end mill with four teeth will be used. The cutter has a side tooth engagement length of 40 mm. Throughout the machining sequence, the bottom tip of the cutler will be positioned 25 mm below the part top surface. which corresponds to Z = 25 mrn. Since the part is 10 mm thick, this zposuion will allow the side cutting edges of the milling cutter to cut the full thickness of the part during profile milling. The cutter will be operated at a spindle speed = 1000 rev/min (which corresponds to a surface speed of about 1.0 m/sec) and a feed rate = 50 mm/min (which cor responds 10 0.20 rnm/tooth). The tool path to be followed by the culler is shown 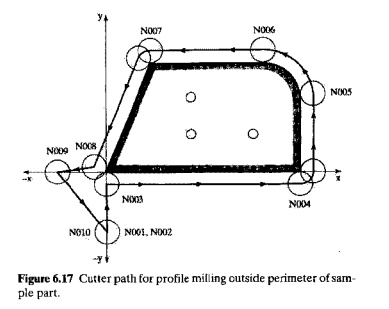 in Figure 6.17, with numbering thai corresponds to the sequence number in the program. Cutter diameter data has been manually entered into offset register 05. At the beginning of the job, the cutter will be positioned so that its center tip is at a target point located at x = O. Y = 50, and t; = +10. The program begins with the tool positioned at this location.