Geometry Definition Using CAD/CAM. A fundamental objective of CAD/CAM is to integrate the design engineering and manufacturing engineering functions. Certainly one of the important design functions is to design the individual components of the product. If a CAD/e' AM system is used, a computer graphics model of each part is developed by the designer and stored in the CAD/CAM data base. That model contains all of the geometric, dimensional, and material specificatluns for the part.

When the same CAD/CAM system, or a CAM system that has access to the same CAD data base in which the part model resides, is used to perform NC part programming, it makes little sense to recreate the geometry of the part during the programming procedure. Instead, the programmer has the capability to retrieve the part geometry model from storage and to use that model to construct the appropriate cutter path. The significant advantage of using CAD/CAM in this way is that it eliminates one of the tirneconsurning steps in computerassisted part programming: geometry definition. After the part geometry has been retrieved, the usual procedure is to lahel the geometric elements that will be used during part programming. These labels are the variable names (symbols) given to the lines, circJe~ and surfaces that comprise the part. Most systems have the capacity to automatically label the geometry clements of the part and to display tbe labels on the monitor. The programmer can then refer to those labeled elements during tool path construction.

If the NC programmer does not have access tothe data base, then the geometry of the part must be defined. This is done by using similar interactive graphics techniques that the product designer would use to design the part. Points are defined in a coordinate system using the computer graphics system, lines and circles are defined from the points, surfaces are defined. and so forth, to construct a geometric model of the part. The advantage of using the interactive graphics system over conventional computerassisted part programming is that the programmer receives immediate visual verification of the definitions being created. This tends to improve the speed and accuracy of the geometry definition process

Tool Path Generation Using CAD/CAM. The second task of the NC programmer in computerassisted part programming is tool path specification, The first step in specifying the tool path is La select the cutting tool for the operation. Most CADICAM systems have tool libraries that can be called by the programmer to identify what tools arc available in the tool crib. The programmer must decide which of the available tools is must appropriate for the operation under consideration and specify it for the tool path. This permits the tool diameter and other dimensions to be entered automatically for tool offset calculations. If the desired cutting tool is not available in the library, an appropriate tool can be specified by rhc programmer. It then becomes part of the library for future use

The next step is tool path definition. There are differences in capabilities of the various CAD/CAM systems, which result in different approaches fur generating the tool path. The most basic approach involves the use of the interactive graphics system to enter the motion commands cnebyone.uirnilar to computerassisted part programming. Individual statements in APT or other part programming language are entered. and the CAD/CAM system provides an immediate graphic display of the action resulting from the command. thereby validating the statement.

A moreadvanced approach for generating tool path commands is to use one of the automatic software modules available on the CAD/CAM system. These modules have been developed to accomplish a number of common machining cycles for milling, drilling, and turning. They are subroutines in the NC programming package that can be called and the required parameters given to execute the machining cycle. Several of these modules are identified in Table 6.13 and Figure 6.25.

When the complete part program has been prepared, the CAD/CAM system can provide an animated simulation of the program for validation purposes.

This can most readily be done for certain NC processes that involve welldefined, relatively simple part geometries. Examples are pointtopoint operations such as NC drilling and electronic component assembly machines. In these processes, the program conststs basically of a series of locations in an xy coordinate system where work is to be performed [e.g .. holes arc to be drilled or components are to be inserted). These locations are determined by data that are generated during product design. Special algorithms can be developed to process the design data and generate the NC program fur the particular system. "fe contounag systems will eventually be capable at a similar level of automation. Automatic programming of this type is closely related to computer-automated process planning (CAPP), discussed in later pages. 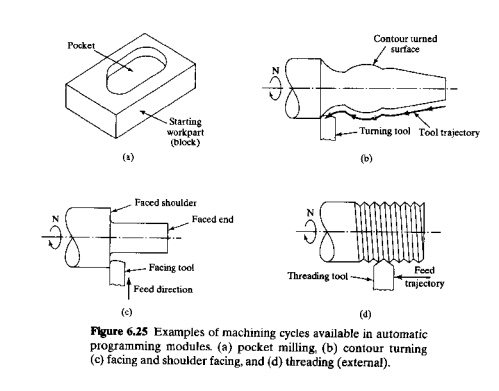