Adrenoceptors are distributed in virtually all organ systems. This section focuses on the activation of adrenoceptors that are responsible for the therapeutic effects of sympathomimetics or that explain their adverse effects.

Activation of β2 receptors in bronchial smooth muscle leads to bronchodilation, and β2 agonists are important in the treat-ment of asthma (see Table 9–3). 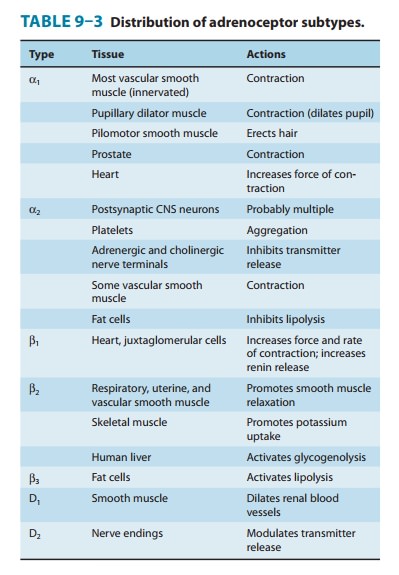 In the eye, the radial pupillary dilator muscle of the iris con-tains α receptors; activation by drugs such as phenylephrine causes mydriasis (see Figure 6–9). Alpha stimulants also have important effects on intraocular pressure. Alpha agonists increase the outflow of aqueous humor from the eye and can be used clinically to reduce intraocular pressure. In contrast, β agonists have little effect, but βantagonists decrease the production of aqueous humor. These effects are important in the treatment of glaucoma , a leading cause of blindness.

In genitourinary organs, the bladder base, urethral sphincter, and prostate contain α receptors that mediate contraction and therefore promote urinary continence. The specific subtype of α1 receptor involved in mediating constriction of the bladder base and prostate is uncertain, but α1A receptors probably play an important role. This effect explains why urinary retention is a potential adverse effect of administration of the α1 agonist midodrine.

Alpha-receptor activation in the ductus deferens, seminal vesi-cles, and prostate plays a role in normal ejaculation. The detumes-cence of erectile tissue that normally follows ejaculation is also brought about by norepinephrine (and possibly neuropeptide Y) released from sympathetic nerves. Alpha activation appears to have a similar detumescent effect on erectile tissue in female animals.

The salivary glands contain adrenoceptors that regulate the secretion of amylase and water. However, certain sympathomi-metic drugs, eg, clonidine, produce symptoms of dry mouth. The mechanism of this effect is uncertain; it is likely that central ner-vous system effects are responsible, although peripheral effects may contribute.

The apocrine sweat glands, located on the palms of the hands and a few other areas, respond to adrenoceptor stimulants with increased sweat production. These are the apocrine nonthermo-regulatory glands usually associated with psychological stress. (The diffusely distributed thermoregulatory eccrine sweat glands are regulated by sympathetic cholinergic postganglionic nerves that activate muscarinic cholinoceptors;)

Sympathomimetic drugs have important effects on intermedi-ary metabolism. Activation of β adrenoceptors in fat cells leads to increased lipolysis with enhanced release of free fatty acids and glycerol into the blood. Beta3 adrenoceptors play a role in mediat-ing this response in animals, but their role in humans is probably minor. Human fat cells also contain α2 receptors that inhibit lipolysis by decreasing intracellular cAMP. Sympathomimetic drugs enhance glycogenolysis in the liver, which leads to increased glucose release into the circulation. In the human liver, the effects of catecholamines are probably mediated mainly by β receptors, though α1 receptors may also play a role. Catecholamines in high concentration may also cause metabolic acidosis. Activation of β2 adrenoceptors by endogenous epinephrine or by sympathomi-metic drugs promotes the uptake of potassium into cells, leading to a fall in extracellular potassium. This may result in a fall in the plasma potassium concentration during stress or protect against a rise in plasma potassium during exercise. Blockade of these recep-tors may accentuate the rise in plasma potassium that occurs dur-ing exercise. On the other hand, epinephrine has been used to treat hyperkalemia in certain conditions, but other alternatives are more commonly used. Beta receptors and α2 receptors that are expressed in pancreatic islets tend to increase and decrease insulin secretion, respectively, although the major regulator of insulin release is the plasma concentration of glucose.

Catecholamines are important endogenous regulators of hor-mone secretion from a number of glands. As mentioned above, insulin secretion is stimulated by β receptors and inhibited by α2 receptors.

Similarly, renin secretion is stimulated by β1 and inhib-ited by α2 receptors; indeed, β-receptor antagonist drugs may lower blood pressure in patients with hypertension at least in part by low-ering plasma renin. Adrenoceptors also modulate the secretion of parathyroid hormone, calcitonin, thyroxine, and gastrin; however, the physiologic significance of these control mechanisms is probably limited. In high concentrations, epinephrine and related agents cause leukocytosis, in part by promoting demargination of seques-tered white blood cells back into the general circulation.

The action of sympathomimetics on the central nervous sys-tem varies dramatically, depending on their ability to cross theblood-brain barrier. The catecholamines are almost completely excluded by this barrier, and subjective CNS effects are noted only at the highest rates of infusion. These effects have been described as ranging from “nervousness” to “an adrenaline rush” or “a feeling of impending disaster.” Furthermore, peripheral effects of β-adrenoceptor agonists such as tachycardia and tremor are similar to the somatic manifestations of anxiety. In contrast, noncatecholamines with indirect actions, such as amphetamines, which readily enter the central nervous system from the circulation,produce qualitatively very different CNS effects. These actions vary from mild alerting, with improved attention to boring tasks; through elevation of mood, insomnia, euphoria, and anorexia; to full-blown psychotic behavior. These effects are not readily assigned to either α- or β-mediated actions and may represent enhancement of dopamine-mediated processes or other effects of these drugs in the CNS.