Phenylephrine was discussed previously when describing theactions of a relatively pure α1 agonist .

Phenylephrine was discussed previously when describing theactions of a relatively pure α1 agonist (Table 9–2). Because it is not a catechol derivative (Figure 9–4), it is not inactivated by COMT and has a longer duration of action than the catecholamines. It is an effective mydriatic and decongestant and can be used to raise the blood pressure (Figure 9–6). 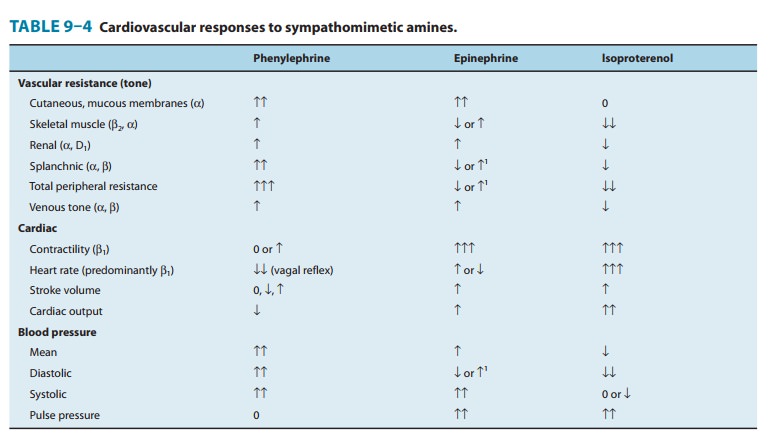 Midodrine is a prodrug that is enzymatically hydrolyzed todesglymidodrine, a selective α1-receptor agonist. The peak concen-tration of desglymidodrine is achieved about 1 hour after midodrine is administered. The primary indication for midodrine is the treat-ment of orthostatic hypotension, typically due to impaired auto-nomic nervous system function. Although the drug has efficacy in diminishing the fall of blood pressure when the patient is standing, it may cause hypertension when the subject is supine. The Food and Drug Administration considered withdrawing approval of this drug in 2010 because required postapproval studies that verify the clinical benefit of the drug had not been done. Action was suspended in response to prescriber and patient requests. 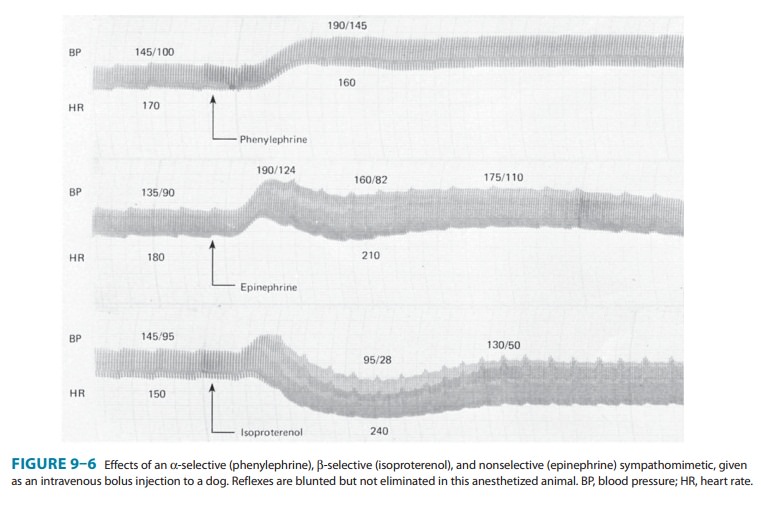 Methoxamine acts pharmacologically like phenylephrine,since it is predominantly a direct-acting α1-receptor agonist. It may cause a prolonged increase in blood pressure due to vasocon-striction; it also causes a vagally mediated bradycardia. Methoxamine is available for parenteral use, but clinical applications are rare and limited to hypotensive states. 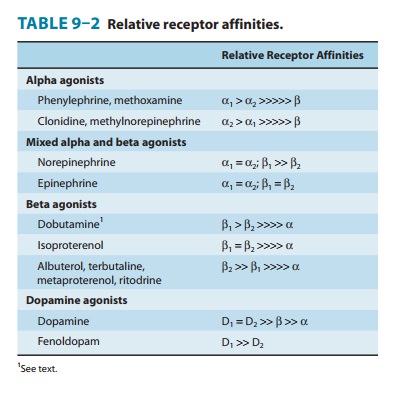 Alpha2-selective agonists have an important ability to decreaseblood pressure through actions in the central nervous system even though direct application to a blood vessel may cause vasocon-striction. Such drugs (eg, clonidine, methyldopa, guanfacine,guanabenz) are useful in the treatment of hypertension (and someother conditions) and are discussed. Sedation is arecognized side effect of these drugs, and newer α2-agonists (with activity also at imidazoline receptors) with fewer central nervous system side effects are available outside the USA for the treatment of hypertension (moxonidine, rilmenidine). On the other hand, the primary indication of dexmedetomidine is for sedation of initially intubated and mechanically ventilated patients during treatment in an intensive care setting. It also reduces the require-ments for opioids in pain control. Finally, tizanidine is used as a central muscle relaxant.

Xylometazoline and oxymetazoline are direct-actingαago-nists. These drugs have been used as topical decongestants because of their ability to promote constriction of the nasal mucosa. When taken in large doses, oxymetazoline may cause hypotension, pre-sumably because of a central clonidine-like effect . Oxymetazoline has significant affinity for α2A receptors.

Isoproterenol (isoprenaline) is a very potentβ-receptor agonistand has little effect on α receptors. The drug has positive chrono-tropic and inotropic actions; because isoproterenol activates β receptors almost exclusively, it is a potent vasodilator. These actions lead to a marked increase in cardiac output associated with a fall in diastolic and mean arterial pressure and a lesser decrease or a slight increase in systolic pressure (Table 9–4; Figure 9–6). 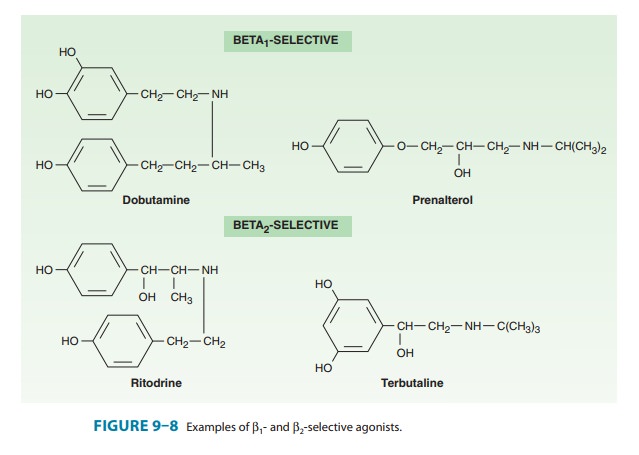 Beta-selective agonists are very important because the separa-tion of β1 and β2 effects (Table 9–2), although incomplete, is sufficient to reduce adverse effects in several clinical applications.

Beta1-selective agents include dobutamine and a partial ago-nist, prenalterol (Figure 9–8). Because they are less effective in activating vasodilator β2 receptors, they may increase cardiac out-put with less reflex tachycardia than occurs with nonselective β agonists such as isoproterenol. Dobutamine was initially consid-ered a relatively β1-selective agonist, but its actions are more com-plex. Its chemical structure resembles dopamine, but its actions are mediated mostly by activation of α and β receptors. Clinical preparations of dobutamine are a racemic mixture of (−) and (+) isomers, each with contrasting activity at α1 and α2 receptors. The (+) isomer is a potent β1 agonist and an α1-receptor antagonist. The (−) isomer is a potent α1 agonist, which is capable of causing significant vasoconstriction when given alone. The resultant car-diovascular effects of dobutamine reflect this complex pharmacol-ogy. Dobutamine has a positive inotropic action caused by the isomer with predominantly β-receptor activity. It has relatively greater inotropic than chronotropic effect compared with isopro-terenol. Activation of α1 receptors probably explains why periph-eral resistance does not decrease significantly.

Beta2-selective agents have achieved an important place in the treatment of asthma. An addi-tional application is to achieve uterine relaxation in premature labor (ritodrine; ). Some examples of β2-selective drugs currently in use are shown in Figures 9–8 and 20–4; many more are available or under investigation.