Ephedrine occurs in various plants and has been used in Chinafor over 2000 years;

Ephedrine occurs in various plants and has been used in Chinafor over 2000 years; it was introduced into Western medicine in 1924 as the first orally active sympathomimetic drug. It is found in ma huang, a popular herbal medication . Ma huang contains multiple ephedrine-like alkaloids in addition to ephedrine. Because ephedrine is a noncatechol phenylisopro-pylamine (Figure 9–5), it has high bioavailability and a relatively long duration of action—hours rather than minutes. As with many other phenylisopropylamines, a significant fraction of the drug is excreted unchanged in the urine. Since it is a weak base, its excretion can be accelerated by acidification of the urine. 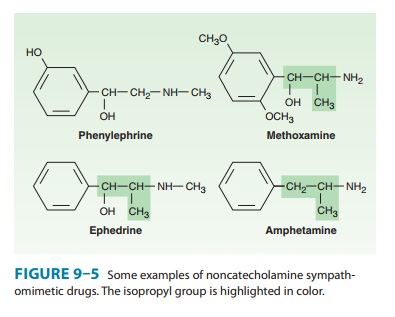 Ephedrine has not been extensively studied in humans despite its long history of use. Its ability to activate β receptors probably accounted for its earlier use in asthma. Because it gains access to the central nervous system, it is a mild stimulant. Ingestion of ephedrine alkaloids contained in ma huang has raised important safety concerns. Pseudoephedrine, one of four ephedrine enantiomers, has been available over the counter as a component of many decongestant mixtures. However, the use of pseu-doephedrine as a precursor in the illicit manufacture of metham-phetamine has led to restrictions on its sale.

Phenylpropanolamine was a common component in over-the-counter appetite suppressants. It was removed from the mar-ket because its use was associated with hemorrhagic strokes in young women. The mechanism of this potential adverse effect is unknown, but the drug can increase blood pressure in patients with impaired autonomic reflexes.