Niches and guilds: the ecological role of a species - Diversity of Fishes: Assemblages

Most discussions of the composition of natural assemblages focus on the functional roles of the different species.

Niches and guilds: the ecological role of a species

Most discussions of the composition of natural assemblages focus on the functional roles of the different species. The ecological function of a species is synonymous with its niche, a broadly defined term that essentially describes what an animal eats and what eats it, its environmental and microhabitat requirements (temperature, oxygen concentration,pH, salinity, substrate type), and symbiotic associations in which it participates. Characterizing and measuring niche components and dimensions allows us to compare niches among species and measure changes in niche use that occur when species are added to or subtracted from an assemblage.

An additional, useful concept for understanding the ecological roles of different species within an assemblage is the guild. The guild concept emphasizes ecological rather than taxonomic similarities (Gerking 1994). A guild consists of the different species in an area that exploit similar resources in a similar way. Hence the many fishes that hover in the water column along the face of a coral reef and feed on zooplankton make up the zooplanktivore guild, as do the large predatory invertebrates feeding in the same area on the same resource. The diurnal zooplanktivore guild on a reef face includes anthiine seabasses, snappers, fusiliers, butterfl yfishes, damselfishes, wrasses, surgeonfishes, and triggerfishes, among others. At night, a different set of species exploits the larger (and hence different) zooplankton resource, constituting the nocturnal zooplanktivore guild: anchovies, herrings, silversides, squirrelfishes, copper sweepers, cardinalfishes, grunts, and glasseye snappers (Hobson 1975).

A species may be a member of different guilds at different times in its life. Angelfishes, wrasses, and leatherjackets (Scomberoides, Carangidae) may belong to the cleanerfish guild as juveniles, but as adults change to feeding on sessile invertebrates, mobile invertebrates, or small fishes, respectively. In streams, fishes can be classified by their habitat preferences as members of a benthic guild (e.g., some minnows, suckers, sculpins, darters) that feed largely on benthic invertebrates living among rocks or buried in sediments, or as members of a water column guild feeding largely on drifting insects or on insects that fall onto the water’s surface (trouts, several minnows) (Grossman & Freeman 1987). In tropical streams, guilds can include algivores, aquatic and general insectivores, piscivores, scale and fin eaters, terrestrial herbivores, and omnivores (Angermeier & Karr 1983). We can also recognize tidepool guilds, kelpbed water column guilds, pelagic predator guilds, wave-zone sand-dwelling guilds, rock-dwelling lake guilds, buried benthic predatory guilds, etc., depending largely on habitat and foraging activities.

For example, the shallow water (10–200 m), soft bottom assemblage of fishes off the southern California coast can be divided into approximately 18 foraging guilds, based on how and what they eat and their position in the water column (Allen 2006) (Fig. 24.4). A drawback to the guild concept is that it overlooks the opportunism that characterizes the feeding habits of so many fishes, especially as adults (Matthews 1998; Hobson et al. 2001; Allan & Castillo 2007). 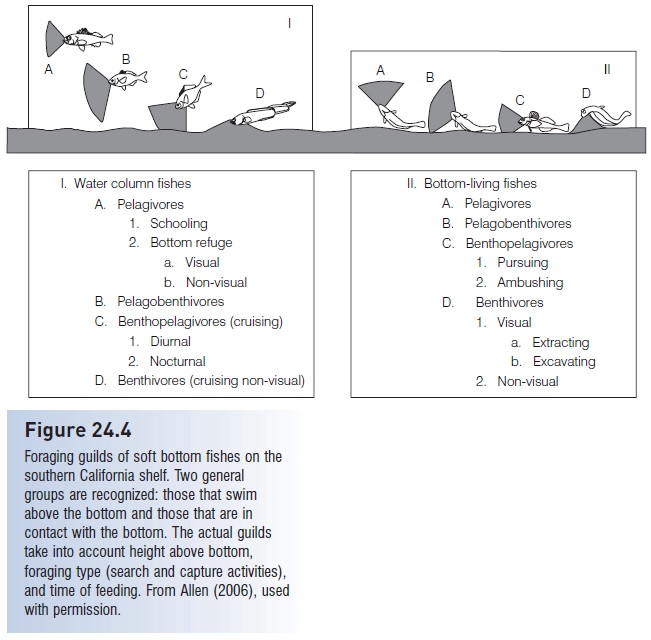