Researchers have compared the fish species that occur in different habitats along environmental gradients.

Researchers have compared the fish species that occur in different habitats along environmental gradients, such as from headwaters to mouths of streams and rivers, vertically within kelp forests, across rocky intertidal zones, or from shore to reef face or continental shelf, or across the sublittoral regions of oceans and lakes out to the limnetic or pelagic zone (Horn &Martin 2006; Stephens et al. 2006)(Fig. 24.7). These investigations have led to generalizations about zonation in various habitats. 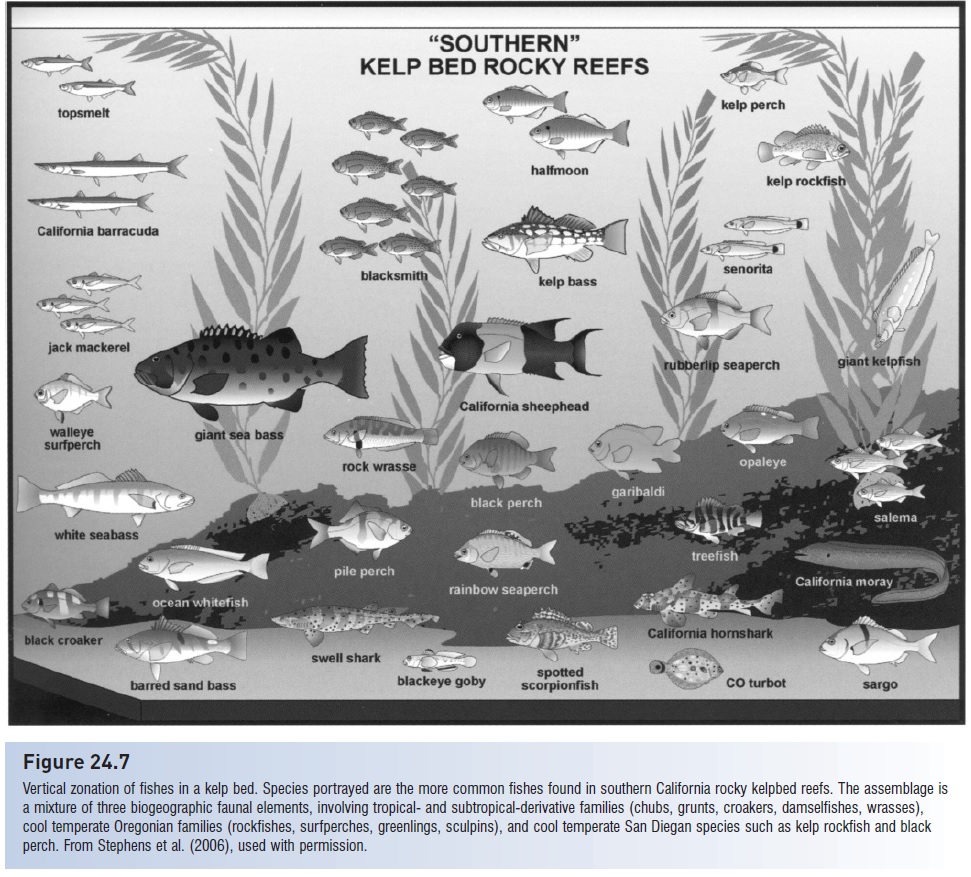 Almost every fish habitat that has been studied can be divided into more or less distinctive zones. Early work of this type focused on stream and river (riverine, lotic, or fluviatile) fishes in the British Isles and Europe, where analogous longitudinal zones (habitat types along the length of a river) were identified in different systems. The zones were often named based on the common fish species present, which in turn reflected species’ preferences with respect to gradient (slope), water velocity, stream width, stream depth, temperature variation, oxygenation, and sediment type. These habitat characteristics also influenced the presence and type of vegetation both in and along a river, bottom characteristics, and invertebrate fauna. A popular  classification recognized four basic zones, beginning with the headwaters and moving to the lowlands (Huet 1959; Hawkes 1975):

Alternative  classifications emphasize different species in different areas, but the recognition of longitudinal succession in habitats and species, often involving three to eight basic zones that differ in a few essential physical features, is common to most classifi catory schemes (e.g., head stream, trout beck, minnow reach, lowland course; spring zone, upper, middle, and lower salmonid region, barbel region). Underlying causes of zonation have focused on the physical factors listed above, which often correlate with stream order. Order is determined by tributary number: small, headwater streams are first order, two first order streams join to form a second order stream, two second order streams join to form a third order stream, etc. (Kuehne 1962). The world’s largest rivers are seldom much more than 10th order. For example, the Mississippi from its confl uence with the Ohio to its mouth, a distance of almost 1000 km, is about an 11th order river. To be larger, another 11th order river would have to flow into it (Fremling et al. 1989). Faunal breaks, where species type and number change in direct correspondence with stream order, have been identified in several systems (Lotrich 1973; Horwitz 1978; Evans & Noble 1979), but other studies have shown that elevation, gradient, historical factors, and especially upstream drainage area and discharge are also likely correlates of species richness and faunal change (Matthews 1986a, 1998; Beecher et al. 1988; Hughes & Omernik 1990).

One popular alternative to a stream order  classification is measurement of downstream- or D-links (Osborne & Wiley 1992). The D-link approach emphasizes the importance of proximity of tributary streams to larger rivers. Small streams flowing into larger rivers have a greater source of colonists and migrants than is the case for tributary streams flowing into small rivers, and seasonal flooding of rivers often causes water and fishes to enter tributaries, drastically altering their species composition. It is therefore necessary to know “the position of a given stream within the overall basin drainage network in order to adequately predict its potential for species richness” (Matthews 1998, p. 312).

Longitudinal zonation among fishes has been described in numerous tropical and temperate riverine systems (Moyle & Nichols 1974; Horwitz 1978; Balon & Stewart 1983; Welcomme 1985). In eastern North America, headwater streams may contain only a single species, such as Brook Trout, sculpin, or Creek Chub. Downstream, where streams increase in both size and velocity, habitat diversity increases and species adapted to high-flow conditions (e.g., darters, hogsuckers, Longnose Dace, rheophilic minnows, sculpin, Smallmouth Bass) are added. Further downstream, as the system widens and deepens, sediments are deposited and primary and secondary production increase. Swift water species characteristic of upstream areas may drop out, but many more species are added. Food webs become less dependent on inputs of food from the surrounding watershed (allochthonous inputs such as falling leaves and falling insects) and more dependent on production from the stream itself (autochthonous inputs from periphyton, macrophytes, and associated animals). Deep pools and slow flowing conditions alternate with shoals and rapids. Fish diversity increases to include suckers, herbivorous minnows, catfishes, and Largemouth Bass. In large, slow-flowing rivers with little gradient, planktonic organisms and planktivores are added (shad, herring, silversides, Paddlefish, and predators such as Striped Bass and pickerel, all species that also inhabit lakes) as are larger carnivores such as sturgeon. Production of food is largely from the river itself, much of it in the form of detritus-eating insects that live on snags formed by fallen trees from the gallery forest. The floodplain and its forest contribute substantially both as sources of nutrients and as nursery areas during seasonal flooding. A fish fauna of backwaters, oxbows, and sloughs is added, including some that are adapted to swampy, periodically deoxygenated conditions (many sunfishes, small pickerels, livebearers, killifishes, Swampfish, Pirate Perch, Mudminnows, gars, Bowfin). Finally, as the river enters the coastal zone and is subject to both the tidal and salinity influence of the ocean, a very diverse assemblage that includes freshwater species from the lower river reaches and marine species from nearshore zones inhabit the saltmarsh or other estuarine region. In all zones, fairly characteristic species are associated with relatively definable habitats.

Since the original formulations of the idea of longitudinal zonation, many corrections, modifications, and exceptions have occurred. Zones were originally thought to be distinct; border lines were even drawn between them on maps. Sharp delineation between zones is probably more the exception than the rule. For example it occurs most often where montane streams flow into foothills or lowlands, such as in western North America where a cold water fauna exists in a high elevation region but the fauna changes as the stream leaves the mountains (Matthews 1998). In reality, zones usually grade into one another, with “border zones” that are intermediate in physical nature and species composition connecting the zones. Sometimes these border zones may be longer than the fish zones they presumably separate.

In fact, the faunas of different zones are not necessarily distinct from one another. A commonality in flowing water is that species diversity increases as one goes downstream, and this increase is generally due to additions, not replacements, of species (see the listing above of European river zones for an example). Rather than species dropping out from faunal lists as one progresses downstream, additional species are found: headwater fishes are often found in downstream habitat patches (e.g., a swift shoal), although downstream species seldom occur in headwaters. Other complications include missing zones, as where rivers appear suddenly due to the emergence of major springs (e.g., northern Florida), or disappear suddenly (western deserts). Reversals in zones may occur in rivers that have a stairstep course, with repeated slow-flowing flat sections that become steeper, or in rivers that flow through lakes that are cooler than the incoming river water. Seasonal migrations among zones and out of rivers and into lakes and the ocean change assemblage composition dramatically. Benthic invertebrates also occur in zones, but these zones may or may not correspond with fish zones.

Most of these exceptions do not contradict the idea of zonation because they can be anticipated from the specific environments involved. The basic idea of a relatively few, generalizable zones, with characteristic fish species living under characteristic flow and temperature regimes, has remained a viable descriptor and predictor of fish assemblages in a surprisingly large number of lotic situations (Hawkes 1975), and can serve to indicate disruptions due to human causes (e.g., Fausch et al. 1984). The major shortcoming of viewing a river, or any aquatic habitat, as isolated sections or zones containing relatively independent and distinct assemblages is that it ignores the critical, functional linkages among sections and subsets of the biota. In this regard, the river continuum concept (RCC; Vannote et al. 1980; Minshall et al. 1985) can be usefully applied to fish assemblages in rivers. The RCC views a river as an orderly progression of predictably intergrading, dependent

regions containing organisms whose ecological roles reflect changes in river basin geomorphology, current speed, gradient, sediment and organic matter composition, and allochthonous versus autochthonous production (among aquatic insects, shredders and gathering collectors predominate in headwaters, shredders are replaced by scrapers in middle reaches, and filter feeders predominate in higher order sections). The integration of fishes into the RCC remains an ongoing challenge in fish (and riverine) ecology (see Matthews 1998; Allan & Castillo 2007), but the realization that a river is a heterogeneous system of multiple habitat types linked by both water and fish movement – a riverscape – is gaining increasing acceptance and application (Fausch et al. 2002).