During the 16th century, European explorers found that natives in the Amazon Basin of South America were using curare, an arrow poison that produced skeletal muscle paralysis, to kill animals.

During the 16th century, European explorers found that natives in the Amazon Basin of South America were using curare, an arrow poison that produced skeletal muscle paralysis, to kill animals. The active compound, d-tubocurarine, and its modern synthetic derivatives have had a major influence on the practice of anesthe-sia and surgery and have proved useful in understanding the basic mechanisms involved in neuromuscular transmission.

The mechanism of neuromuscular transmission at the motor end plate is similar to that described for preganglionic cholinergic nerves. The arrival of an action potential at the motor nerve terminal causes an influx of calcium and release of the neurotrans-mitter acetylcholine. Acetylcholine then diffuses across the synaptic cleft to activate the nicotinic receptors located on the motor end plate. As noted, the adult NM receptor is composed of five peptides: two alpha peptides, one beta, one gamma, and one delta peptide (Figure 27–1). The binding of two acetylcholine 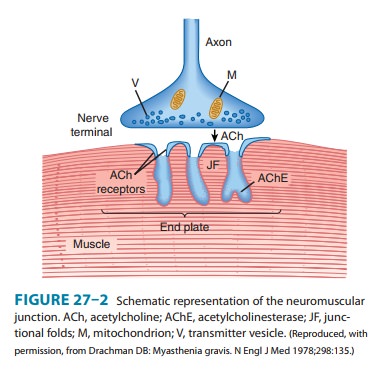 However, if the end plate potential is large, the adjacent muscle membrane is depolarized, and an action potential will be propa-gated along the entire muscle fiber. Muscle contraction is then initi-ated by excitation-contraction coupling. The released acetylcholine is quickly removed from the end plate region by both diffusion and enzymatic destruction by the local acetylcholinesterase enzyme.

At least two additional types of acetylcholine receptors are found within the neuromuscular apparatus. One type is located on the presynaptic motor axon terminal, and activation of these receptors mobilizes additional transmitter for subsequent release by moving more acetylcholine vesicles toward the synaptic mem-brane. The second type of receptor is found on perijunctional cells and is not normally involved in neuromuscular transmission. However, under certain conditions (eg, prolonged immobiliza-tion, thermal burns), these receptors may proliferate sufficiently to affect subsequent neuromuscular transmission.

Skeletal muscle relaxation and paralysis can occur from inter-ruption of function at several sites along the pathway from the central nervous system (CNS) to myelinated somatic nerves, unmyelinated motor nerve terminals, nicotinic acetylcholine receptors, the motor end plate, the muscle membrane, and the intracellular muscular contractile apparatus itself.

Blockade of end plate function can be accomplished by two basic mechanisms. Pharmacologic blockade of the physiologic agonist acetylcholine is characteristic of the antagonist neuromus-cular blocking drugs (ie, nondepolarizing neuromuscular blocking drugs). These drugs prevent access of the transmitter to its recep-tor and thereby prevent depolarization. The prototype of this nondepolarizing subgroup is d-tubocurarine. The second type of blockade can be produced by an excess of a depolarizing agonist, such as acetylcholine. This seemingly paradoxical effect of acetyl-choline also occurs at the ganglionic nicotinic acetylcholine recep-tor. The prototypical depolarizing blocking drug is succinylcholine. A similar depolarizing block can be produced by acetylcholine itself when high local concentrations are achieved in the synaptic cleft (eg, by cholinesterase inhibitor intoxication) and by nicotine and other nicotinic agonists. However, the neuromuscular block produced by depolarizing drugs other than succinylcholine cannot be precisely controlled and is of no clinical value.