Baclofen (p-chlorophenyl-GABA) was designed to be an orally active GABA-mimetic agent and is an agonist at GABAB receptors.

Baclofen (p-chlorophenyl-GABA) was designed to be an orally active GABA-mimetic agent and is an agonist at GABAB receptors. Activation of these receptors by baclofen results in hyperpolarization, probably by increased K+ conductance (see Figure 24–2). It has been suggested that hyperpolarization causes presynaptic inhibition by reducing calcium influx (Figure 27–11) and reduces the release of excitatory transmitters in both the brain and the spinal cord. Baclofen may also reduce pain in patients with spasticity, perhaps by inhibiting the release of substance P (neurokinin-1) in the spinal cord.

Baclofen is at least as effective as diazepam in reducing spas-ticity and causes less sedation. In addition, baclofen does not reduce overall muscle strength as much as dantrolene. It is rap-idly and completely absorbed after oral administration and has a plasma half-life of 3–4 hours. Dosage is started at 15 mg twice daily, increasing as tolerated to 100 mg daily. Adverse effects of this drug include drowsiness; however, patients become tolerant to the sedative effect with chronic administration. Increased seizure activity has been reported in epileptic patients. Therefore, withdrawal from baclofen must be done very slowly. 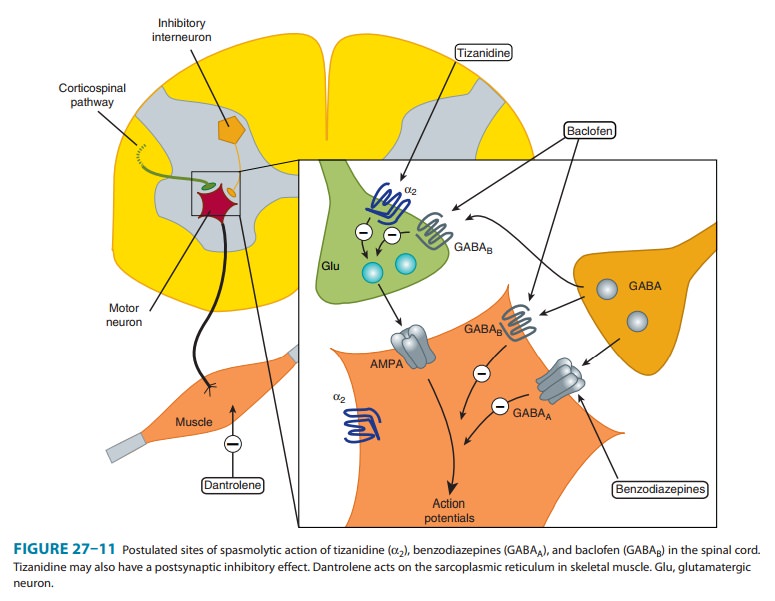 Studies have confirmed that intrathecal administration of baclofen can control severe spasticity and muscle pain that is not responsive to medication by other routes of administration. Owing to the poor egress of baclofen from the spinal cord, peripheral symptoms are rare. Therefore, higher central concentrations of the drug may be tolerated. Partial tolerance to the effect of the drug may occur after several months of therapy, but can be overcome by upward dosage adjust-ments to maintain the beneficial effect. Excessive somnolence, respira-tory depression, and even coma have been described. Although a major disadvantage of this therapeutic approach is the difficulty of maintaining the drug delivery catheter in the subarachnoid space, risking an acute withdrawal syndrome upon treatment interruption, long-term intrathecal baclofen therapy can improve the quality of life for patients with severe spastic disorders.Oral baclofen has been studied in several other medical condi-tions, including patients with intractable low back pain. Preliminary studies suggest that it may also be effective in reducing craving in recovering alcoholics . Finally, it has been alleged to be effective in preventing migraine headaches in some patients.