Dantrolene is a hydantoin derivative related to phenytoin that has a unique mechanism of spasmolytic activity.

Dantrolene is a hydantoin derivative related to phenytoin that has a unique mechanism of spasmolytic activity. In contrast to the centrally acting drugs, dantrolene reduces skeletal muscle strength by interfering with excitation-contraction coupling in the muscle fibers. The normal contractile response involves release of calcium from its stores in the sarcoplasmic reticulum (see Figures 13–1 and 27–10). This activator calcium brings about the tension-generating interaction of actin with myosin. Calcium is released from the sarcoplasmic reticulum via a calcium channel, called the ryano-dine receptor (RyR) channel because the plant alkaloid ryano-dine combines with a receptor on the channel protein. In the case of the skeletal muscle RyR1 channel, ryanodine facilitates the open configuration. 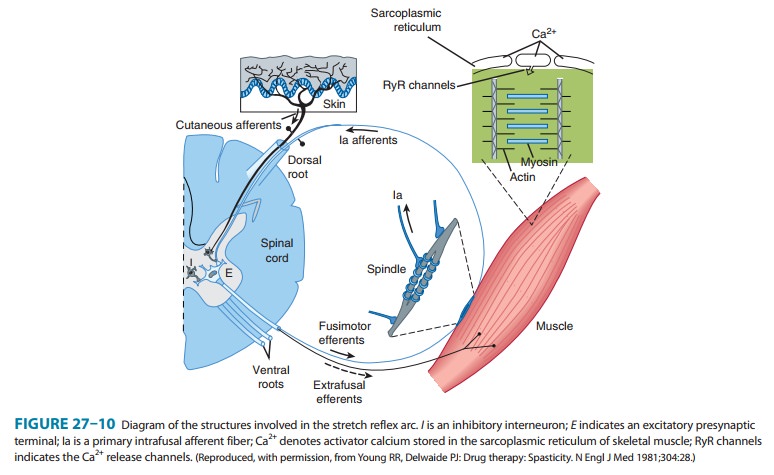 Dantrolene interferes with the release of activator calcium through this sarcoplasmic reticulum calcium channel by binding to the RyR1 and blocking the opening of the channel. Motor units that contract rapidly are more sensitive to the drug’s effects than are slower-responding units. Cardiac muscle and smooth muscle are minimally depressed because the release of calcium from their sarcoplasmic reticulum involves a different RyR chan-nel (RyR2).

Treatment with dantrolene is usually initiated with 25 mg daily as a single dose, increasing to a maximum of 100 mg four times daily as tolerated. Only about one third of an oral dose of dant-rolene is absorbed, and the elimination half-life of the drug is approximately 8 hours. Major adverse effects are generalized muscle weakness, sedation, and occasionally hepatitis.

A special application of dantrolene is in the treatment of malignant hyperthermia, a rare heritable disorder that can betriggered by a variety of stimuli, including general anesthetics (eg, volatile anesthetics) and neuromuscular blocking drugs (eg, suc-cinylcholine;). Patients at risk for this condi-tion have a hereditary alteration in Ca2+-induced Ca2+ release via the RyR1 channel or impairment in the ability of the sarcoplasmic reticulum to sequester calcium via the Ca2+ transporter

(Figure 27–10). Several mutations associated with this risk have been identified. After administration of one of the triggering agents, there is a sudden and prolonged release of calcium, with massive muscle contraction, lactic acid production, and increased body temperature. Prompt treatment is essential to control acido-sis and body temperature and to reduce calcium release. The latter is accomplished by administering intravenous dantrolene, starting with a dose of 1 mg/kg IV, and repeating as necessary to a maxi-mum dose of 10 mg/kg.