Before the introduction of neuromuscular blocking drugs, pro-found skeletal muscle relaxation for intracavitary operations could be achieved only by producing levels of volatile (inhaled) anesthesia deep enough to produce profound depressant effects on the cardiovascular and respiratory systems.

Before the introduction of neuromuscular blocking drugs, pro-found skeletal muscle relaxation for intracavitary operations could be achieved only by producing levels of volatile (inhaled) anesthe-sia deep enough to produce profound depressant effects on the cardiovascular and respiratory systems. The adjunctive use of neu-romuscular blocking drugs makes it possible to achieve adequate muscle relaxation for all types of surgical procedures without the cardiorespiratory depressant effects produced by deep anesthesia.

Monitoring the effect of muscle relaxants during surgery (and recovery following the administration of cholinesterase inhibitors) typically involves the use of a device that produces transdermal electrical stimulation of one of the peripheral nerves to the hand or facial muscles and recording of the evoked contractions (ie, twitch responses). The motor responses to different patterns of peripheral nerve stimulation can be recorded in the operating room during the procedure (Figure 27–7). The three most com-monly used patterns include (1) single-twitch stimulation, (2) train-of-four (TOF) stimulation, and (3) tetanic stimulation. Two newer modalities are also available to monitor neuromuscular transmission: double-burst stimulation and posttetanic count. 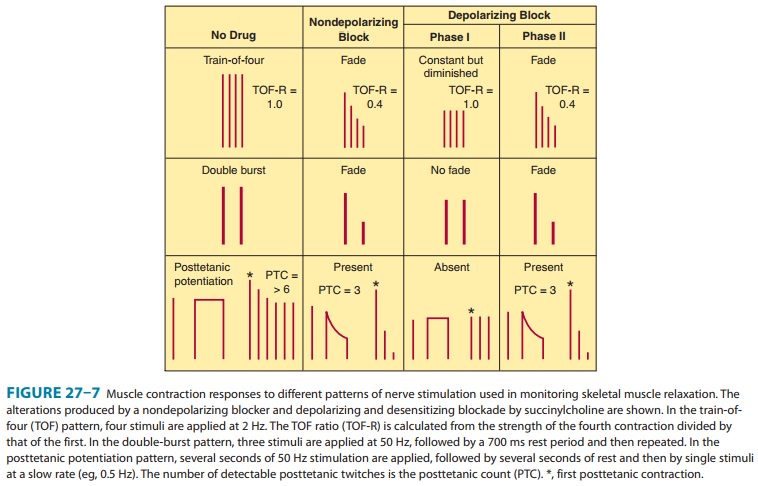 With single-twitch stimulation, a single supramaximal electri-cal stimulus is applied to a peripheral nerve at frequencies from 0.1 Hz to 1.0 Hz. The higher frequency is often used during\nduction and reversal to more accurately determine the peak (maximal) drug effect. TOF stimulation involves four successive supramaximal stimuli given at intervals of 0.5 second (2 Hz). Each stimulus in the TOF causes the muscle to contract, and the rela-tive magnitude of the response of the fourth twitch compared with the first twitch is the TOF ratio. With a depolarizing block, all four twitches are reduced in a dose-related fashion. With a nondepolarizing block, the TOF ratio decreases (“fades”) and is inversely proportional to the degree of blockade. During recovery from nondepolarizing block, the amount of fade decreases and the TOF ratio approaches 1.0. Recovery to a TOF ratio greater than 0.7 is typically necessary for resumption of spontaneous ventila-tion. However, complete clinical recovery from a nondepolarizing block is considered to require a TOF greater than 0.9. Fade in the TOF response after administration of succinylcholine signifies the development of a phase II block.

The standard approach used for monitoring the clinical effects of muscle relaxants during surgery is to use a peripheral nerve stimulating device to elicit motor responses, which are visually observed by the anesthesiologist. A more quantitative approach to neuromuscular monitoring involves the use of acceleromyography or force-transduction for measuring the evoked response (ie, movement) of the thumb to TOF stimulation over the ulnar nerve at the wrist.

During anesthesia, administration of tubocurarine, 0.1–0.4 mg/ kg IV, initially causes motor weakness, followed by the skeletal muscles becoming flaccid and inexcitable to electrical stimula-tion (Figure 27–9). In general, larger muscles (eg, abdominal, trunk, paraspinous, diaphragm) are more resistant to neuromus-cular blockade and recover more rapidly than smaller muscles (eg, facial, foot, hand). The diaphragm is usually the last muscleto be paralyzed. Assuming that ventilation is adequately main-tained, no adverse effects occur. When administration of muscle relaxants is discontinued, recovery of muscles usually occurs in reverse order, with the diaphragm regaining function first. The pharmacologic effect of tubocurarine, 0.3 mg/kg IV, usually lasts 45–60 minutes. However, subtle evidence of residual muscle paralysis detected using a neuromuscular monitor may last for another hour, increasing the likelihood of adverse outcomes, eg, aspiration and decreased hypoxic drive. Potency and duration of action of the other nondepolarizing drugs are shown in Table 27–1. In addition to the duration of action, the most important property distinguishing the nondepolarizing relaxants is the time to onset of the blocking effect, which determines how rapidly the patient’s trachea can be intubated. Of the currently available nondepolarizing drugs, rocuronium has the most rapid onset time (60–120 seconds).

Following the administration of succinylcholine, 0.75–1.5 mg/kg IV, transient muscle fasciculations occur over the chest and abdo-men within 30 seconds, although general anesthesia and the prior administration of a small dose of a nondepolarizing muscle relax-ant tends to attenuate them. As paralysis develops rapidly (< 90 seconds), the arm, neck, and leg muscles are initially relaxed fol-lowed by the respiratory muscles. As a result of succinylcholine’s rapid hydrolysis by cholinesterase in the plasma (and liver), the duration of neuromuscular block typically lasts less than 10 min-utes (Table 27–1). 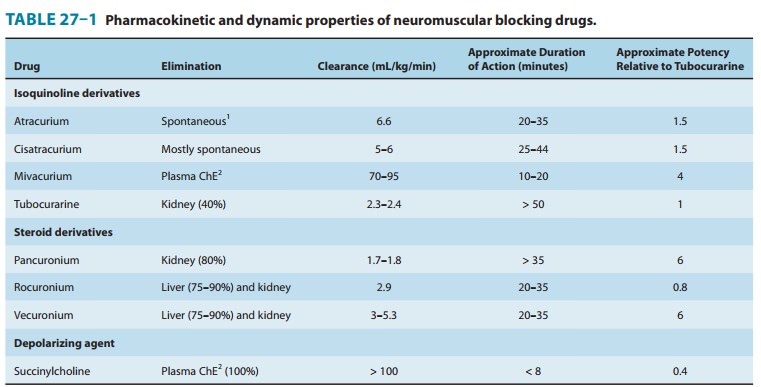 histamine receptors (Table 27–3). Tubocurarine and, to a lesser extent, metocurine, mivacurium, and atracurium can produce hypotension as a result of systemic histamine release, and with larger doses, ganglionic blockade may occur with tubocurarine and metocurine. Premedication with an antihistaminic compound attenuates tubocurarine- and mivacurium-induced hypotension. Pancuronium causes a moderate increase in heart rate and a smaller increase in cardiac output, with little or no change in sys-temic vascular resistance. Although pancuronium-induced tachy-cardia is primarily due to a vagolytic action, release of norepinephrine from adrenergic nerve endings and blockade of neuronal uptake of norepinephrine may be secondary mecha-nisms. Bronchospasm may be produced by neuromuscular blockers that release histamine (eg, mivacurium), but insertion of a endo-tracheal tube is the most common reason for bronchospasm after induction of general anesthesia.

Succinylcholine can cause cardiac arrhythmias when admin-istered during halothane anesthesia. The drug stimulates auto-nomic cholinoceptors, including the nicotinic receptors at both sympathetic and parasympathetic ganglia and muscarinic recep-tors in the heart (eg, sinus node). The negative inotropic and chronotropic responses to succinylcholine can be attenuated by administration of an anticholinergic drug (eg, glycopyrrolate, atropine). With large doses of succinylcholine, positive inotro-pic and chronotropic effects may be observed. On the other hand, bradycardia has been repeatedly observed when a second dose of succinylcholine is given less than 5 minutes after the initial dose. This transient bradycardia can be prevented by thiopental, atropine, ganglionic-blocking drugs, and by pre-treating with a small dose of a nondepolarizing muscle relaxant (eg, pancuronium). Direct myocardial effects, increased musca-rinic stimulation, and ganglionic stimulation contribute to this bradycardic response.

Other Adverse Effects of Depolarizing Blockade

Patients with burns, nerve damage or neuromuscular disease, closed head injury, and other trauma can respond to succinylcho-line by releasing potassium into the blood, which, on rare occa-sions, results in cardiac arrest.

Administration of succinylcholine may be associated with the rapid onset of an increase in intraocular pressure (< 60 seconds), peaking at 2–4 minutes, and declining after 5 minutes. The mechanism may involve tonic contraction of myofibrils or tran-sient dilation of ocular choroidal blood vessels. Despite the increase in intraocular pressure, the use of succinylcholine for ophthalmologic operations is not contraindicated unless the ante-rior chamber is open (“open globe”) due to trauma.

In heavily muscled patients, the fasciculations associated with suc-cinylcholine may cause an increase in intragastric pressure ranging from 5 to 40 cm H2O, increasing the risk for regurgitation and aspiration of gastric contents. This complication is more likely to occur in patients with delayed gastric emptying (eg, those with diabetes), traumatic injury (eg, an emergency case), esophageal dysfunction, and morbid obesity.

Myalgias are a common postoperative complaint of heavily mus-cled patients and those who receive large doses (> 1.5 mg/kg) of succinylcholine. The true incidence of myalgias related to muscle fasciculations is difficult to establish because of confounding factors, including the anesthetic technique, type of surgery, and positioning during the operation.

However, the incidence of myal-gias has been reported to vary from less than 1% to 20%. It occurs more frequently in ambulatory than in bedridden patients. The pain is thought to be secondary to the unsynchronized contrac-tions of adjacent muscle fibers just before the onset of paralysis. However, there is controversy over whether the incidence of muscle pain following succinylcholine is actually higher than with nondepolarizing muscle relaxants when other potentially con-founding factors are taken into consideration.

Interactions with Other Drugs

Inhaled (volatile) anesthetics potentiate the neuromuscular block-ade produced by nondepolarizing muscle relaxants in a dose-de-pendent fashion. Of the general anesthetics that have been studied, inhaled anesthetics augment the effects of muscle relax-ants in the following order: isoflurane (most); sevoflurane, desflu-rane, enflurane, and halothane; and nitrous oxide (least) (Figure 27–9). The most important factors involved in this interaction are the following: (1) nervous system depression at sites proximal to the neuromuscular junction (ie, central nervous system); (2) increased muscle blood flow (ie, due to peripheral vasodilation produced by volatile anesthetics), which allows a larger fraction of the injected muscle relaxant to reach the neuro-muscular junction; and (3) decreased sensitivity of the postjunc-tional membrane to depolarization.

A rare interaction of succinylcholine with volatile anesthetics results in malignant hyperthermia, a condition caused by abnor-mal release of calcium from stores in skeletal muscle.

Numerous reports have described enhancement of neuromuscu-lar blockade by antibiotics (eg, aminoglycosides). Many of the antibiotics have been shown to cause a depression of evoked release of acetylcholine similar to that caused by administering magnesium. The mechanism of this prejunctional effect appears to be blockade of specific P-type calcium channels in the motor nerve terminal.

In small doses, local anesthetics can depress posttetanic potentia-tion via a prejunctional neural effect. In large doses, local anesthet-ics can block neuromuscular transmission. With higher doses, local anesthetics block acetylcholine-induced muscle contractions as a result of blockade of the nicotinic receptor ion channels. Experimentally, similar effects can be demonstrated with sodium channel-blocking antiarrhythmic drugs such as quinidine. However, at the doses used for cardiac arrhythmias, this interac-tion is of little or no clinical significance. Higher concentrations of bupivacaine (0.75%) have been associated with cardiac arrhyth-mias independent of the muscle relaxant used.

Effects of Diseases & Aging on the Neuromuscular Response

Conversely, patients with severe burns and those with upper motor neuron disease are resistant to nondepolarizing muscle relaxants. This desensitization is probably caused by proliferation of extrajunctional receptors, which results in an increased dose requirement for the nondepolarizing relaxant to block a sufficient number of receptors.

The optimum dose of sugammadex required to achieve ade-quate reversal of the neuromuscular blocking agent has yet to be definitively established. Clinical trials studying safety and efficacy have used doses ranging from 0.5 to 16 mg/kg. From 2 mg/kg upward, sugammadex dose-dependently reverses rocuronium with increasing speed and efficacy. These trials reported no difference in prevalence of untoward effects among sugammadex, placebo, and neostigmine. The data need to be confirmed in larger trials, especially the drug’s potential to elicit allergic or hypersensitivity reactions.

The sugammadex-rocuronium complex is typically excreted unchanged in the urine within 24 hours in patients with normal renal function. In patients with renal insufficiency, complete uri-nary elimination may take much longer. However, due to the strong complex formation with rocuronium, no signs of recur-rence of neuromuscular blockade have been noted up to 48 hours after use in such patients.

Further large-scale studies will be needed to evaluate the effi-cacy, safety, and clearance of sugammadex in patient populations with various levels of renal failure.

One of the most important applications of the neuromuscular blockers is in facilitating intracavitary surgery, especially in intra-abdominal and intrathoracic procedures.

By relaxing the pharyngeal and laryngeal muscles, neuromuscular blocking drugs facilitate laryngoscopy and placement of the endo-tracheal tube. Placement of a endotracheal tube ensures an ade-quate airway and minimizes the risk of pulmonary aspiration during general anesthesia.

Neuromuscular blocking drugs (ie, succinylcholine) are occasion-ally used to attenuate the peripheral (motor) manifestations of convulsions associated with status epilepticus or local anesthetic toxicity. Although this approach is effective in eliminating the muscular manifestations of the seizures, it has no effect on the central processes because neuromuscular blocking drugs do not cross the blood-brain barrier.