G-CSF and GM-CSF, the two myeloid growth factors currentlyavailable for clinical use, were originally purified from cultured human cell lines (Table 33–4). Recombinant human G-CSF (rHuG-CSF; filgrastim) is produced in a bacterial expression system. It is a nonglycosylated peptide of 175 amino acids, with a molecular weight of 18 kDa. Recombinant human GM-CSF (rHuGM-CSF; sargramostim) is produced in a yeast expression system. It is a partially glycosylated peptide of 127 amino acids, with three molecular species with molecular weights of 15,500; 15,800; and 19,500. These preparations have serum half-lives of 2–7 hours after intravenous or subcutaneous administration. Pegfilgrastim, a covalent conjugation product of filgrastim and aform of polyethylene glycol, has a much longer serum half-life than recombinant G-CSF, and it can be injected once per myelo-suppressive chemotherapy cycle instead of daily for several days. Lenograstim, used widely in Europe, is a glycosylated form ofrecombinant G-CSF. 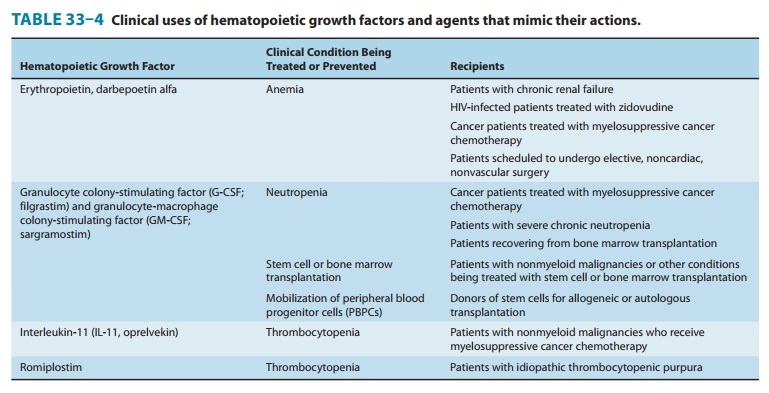 The myeloid growth factors stimulate proliferation and differen-tiation by interacting with specific receptors found on myeloid progenitor cells. Like the erythropoietin receptor, these receptors are members of the JAK/STAT superfamily . G-CSF stimulates proliferation and differentiation of progenitors already committed to the neutrophil lineage. It also activates the phagocytic activity of mature neutrophils and prolongs their survival in the circulation. G-CSF also has a remarkable ability to mobilize hematopoietic stem cells, ie, to increase their concentra-tion in peripheral blood. This biologic effect underlies a major advance in transplantation—the use of peripheral blood stemcells (PBSCs) rather than bone marrow stem cells for autologousand allogeneic hematopoietic stem cell transplantation .

GM-CSF has broader biologic actions than G-CSF. It is a multipotential hematopoietic growth factor that stimulates prolif-eration and differentiation of early and late granulocytic progeni-tor cells as well as erythroid and megakaryocyte progenitors

Erythropoietin has been used successfully to offset the anemia produced by zidovudine treatment in patients with HIV infection and in the treatment of the anemia of prematurity. It can also be used to reduce the need for transfusion in high-risk patients undergoing elective, non-cardiac, nonvascular surgery.

Erythropoietin is one of the drugs banned by the International Olympic Committee. The use of erythropoietin by athletes is based on their hope that increased red blood cell concentration will increase oxygen delivery to muscles and improve performance.

The most common adverse effects of erythropoietin are hyperten-sion and thrombotic complications. In March 2007, the FDA issued a warning that patients with chronic renal failure or cancer whose serum hemoglobin is raised to more than 12 g/dL with an ESA face a greater risk of a thrombotic event or, in patients with advanced head and neck cancers, faster tumor growth. The warn-ing was primarily based on clinical trial data from patients with chronic kidney disease indicating an increased rate of mortality and cardiovascular events (stroke, myocardial infarction, worsen-ing congestive heart failure, and hypertension) in patients dosed with an ESA to a target hemoglobin level of 12–16 g/dL or dosed to maintain a normal hematocrit (42%) versus a lower target hematocrit of 30%. In addition, a meta-analysis of 51 placebo-controlled trials of ESAs in cancer patients reported an increased rate of all-cause mortality and venous thrombosis in those receiving an ESA. Based on the accumulated evidence, it is recommended that the hemoglobin level not exceed 12 g/dL in patients with chronic kidney disease receiving an ESA, and that ESAs be used conservatively in cancer patients (eg, when Like G-CSF, GM-CSF also stimulates the function of mature neutrophils. GM-CSF acts together with interleukin-2 to stimu-late T-cell proliferation and appears to be a locally active factor at the site of inflammation. GM-CSF mobilizes peripheral blood stem cells, but it is significantly less efficacious and more toxic than G-CSF in this regard.

Neutropenia is a common adverse effect of the cytotoxic drugs used to treat cancer and increases the risk of serious infection in patients receiving chemotherapy. Unlike the treatment of anemia and thrombocytopenia, transfusion of neutropenic patients with granulocytes collected from donors is performed rarely and with limited success. The introduction of G-CSF in 1991 represented a milestone in the treatment of chemotherapy-induced neutrope-nia. This growth factor dramatically accelerates the rate of neutro-phil recovery after dose-intensive myelosuppressive chemotherapy (Figure 33–5). It reduces the duration of neutropenia and usually raises the nadir count, the lowest neutrophil count seen following a cycle of chemotherapy.The ability of G-CSF to increase neutrophil counts after myelosuppressive chemotherapy is nearly universal, but its impact on clinical outcomes is more variable. Many, but not all, clinical trials and meta-analyses have shown that G-CSF reduces episodes of febrile neutropenia, requirements for broad-spectrum antibiot-ics, infections, and days of hospitalization. Clinical trials have not shown improved survival in cancer patients treated with G-CSF. Clinical guidelines for the use of G-CSF after cytotoxic chemo-therapy recommend reserving G-CSF for patients at high risk for febrile neutropenia based on age, medical history, and disease characteristics; patients receiving dose-intensive chemotherapy 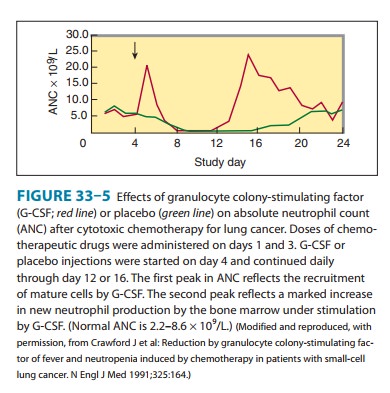 Like G-CSF and pegfilgrastim, GM-CSF also reduces the dura-tion of neutropenia after cytotoxic chemotherapy. It has been more difficult to show that GM-CSF reduces the incidence of febrile neutropenia, probably because GM-CSF itself can induce fever. In the treatment of chemotherapy-induced neutropenia, G-CSF, 5 mcg/kg/d, or GM-CSF, 250 mcg/m2/d, is usually started within 24–72 hours after completing chemotherapy and is continued until the absolute neutrophil count is greater than 10,000 cells/μL. Pegfilgrastim is given as a single dose of 6 mg.

The utility and safety of the myeloid growth factors in the postchemotherapy supportive care of patients with acute myeloid leukemia (AML) have been the subject of a number of clinical trials. Because leukemic cells arise from progenitors whose proliferation and differentiation are normally regulated by hematopoietic growth factors, including GM-CSF and G-CSF, there was concern that myeloid growth factors could stimulate leukemic cell growth and increase the rate of relapse. The results of randomized clinical trials suggest that both G-CSF and GM-CSF are safe following induction and consolidation treatment of myeloid and lymphoblastic leuke-mia. There has been no evidence that these growth factors reduce the rate of remission or increase relapse rate. On the contrary, the growth factors accelerate neutrophil recovery and reduce infection rates and days of hospitalization. Both G-CSF and GM-CSF have FDA approval for treatment of patients with AML.

G-CSF and GM-CSF have also proved to be effective in treating the neutropenia associated with congenital neutropenia, cyclicneutropenia, myelodysplasia, and aplastic anemia. Manypatients with these disorders respond with a prompt and some-times dramatic increase in neutrophil count. In some cases, this results in a decrease in the frequency of infections. Because neither G-CSF nor GM-CSF stimulates the formation of erythrocytes and platelets, they are sometimes combined with other growth factors for treatment of pancytopenia.

The myeloid growth factors play an important role in autolo-gous stem cell transplantation for patients undergoing high-dosechemotherapy. High-dose chemotherapy with autologous stem cell support is increasingly used to treat patients with tumors that are resistant to standard doses of chemotherapeutic drugs. The high-dose regimens produce extreme myelosuppression; the myelosuppression is then counteracted by reinfusion of the patient’s own hematopoietic stem cells (which are collected prior to chemotherapy). The administration of G-CSF or GM-CSF early after autologous stem cell transplantation reduces the time to engraftment and to recovery from neutropenia in patients receiving stem cells obtained either from bone marrow or from peripheral blood. These effects are seen in patients being treated for lymphoma or for solid tumors. G-CSF and GM-CSF are also used to support patients who have received allogeneic bone mar-row transplantation for treatment of hematologic malignancies or bone marrow failure states. In this setting, the growth factors speed the recovery from neutropenia without increasing the inci-dence of acute graft-versus-host disease.

Perhaps the most important role of the myeloid growth factors in transplantation is for mobilization of PBSCs. Stem cells col-lected from peripheral blood have nearly replaced bone marrow as the hematopoietic preparation used for autologous and allogeneic transplantation. The cells can be collected in an outpatient setting with a procedure that avoids much of the risk and discomfort of bone marrow collection, including the need for general anesthesia. In addition, there is evidence that PBSC transplantation results in more rapid engraftment of all hematopoietic cell lineages and in reduced rates of graft failure or delayed platelet recovery.

G-CSF is the cytokine most commonly used for PBSC mobi-lization because of its increased efficacy and reduced toxicity compared with GM-CSF. To mobilize stem cells for autologous transplantation, donors are given 5–10 mcg/kg/d subcutaneously for 4 days. On the fifth day, they undergo leukapheresis. The suc-cess of PBSC transplantation depends on transfusion of adequate numbers of stem cells. CD34, an antigen present on early pro-genitor cells and absent from later, committed, cells, is used as a marker for the requisite stem cells. The goal is to infuse at least 5 × 106 CD34 cells/kg; this number of CD34 cells usually results in prompt and durable engraftment of all cell lineages. It may take several separate leukaphereses to collect enough CD34 cells, espe-cially from older patients and patients who have been exposed to radiation therapy or chemotherapy.

For patients with multiple myeloma or non-Hodgkin’s lym-phoma who respond suboptimally to G-CSF alone, the novel hematopoietic stem cell mobilizer plerixafor can be added to G-CSF. Plerixafor is a bicyclam molecule originally developed as an anti-HIV drug because of its ability to inhibit the CXC chemokine receptor 4 (CXCR4), a co-receptor for HIV entry into CD4+ T lymphocytes . Early clinical trials of plerixafor revealed a remarkable ability to increase CD34 cells in peripheral blood. Plerixafor mobilizes CD34 cells by preventing chemokine stromal cell-derived factor-1α (SDF-1α) from binding to CXCR4 and directing the CD34 cells to “home” to the bone marrow. Plerixafor is administered by subcutaneous injection after four days of G-CSF treatment and 11 hours prior to leukapheresis; it can be used with G-CSF for up to four continuous days. Plerixafor is eliminated primarily by the renal route and must be dose-adjusted for patients with renal impairment. The drug is well-tolerated; the most common adverse effects associated with its use are injection site reactions, GI disturbances, dizziness, fatigue, and headache.

Although the three growth factors have similar effects on neutro-phil counts, G-CSF and pegfilgrastim are used more frequently than GM-CSF because they are better tolerated. G-CSF andpegfilgrastim can cause bone pain, which clears when the drugs are discontinued. GM-CSF can cause more severe side effects, par-ticularly at higher doses. These include fever, malaise, arthralgias, myalgias, and a capillary leak syndrome characterized by periph-eral edema and pleural or pericardial effusions. Allergic reactions may occur but are infrequent. Splenic rupture is a rare but serious complication of the use of G-CSF for PBSC.