Starting in January 1998, all products made from enriched grains in the United States and Canada were required to be supplemented with folic acid.

Starting in January 1998, all products made from enriched grains in the United States and Canada were required to be supplemented with folic acid. These rulings were issued to reduce the incidence of congenital neural tube defects (NTDs). Epidemiologic studies show a strong correlation between maternal folic acid deficiency and the incidence of NTDs such as spina bifida and anencephaly. The requirement for folic acid supplementation is a public health mea-sure aimed at the significant number of women who do not receive prenatal care and are not aware of the importance of adequate folic acid ingestion for preventing birth defects in their infants. Observational studies from countries that supplement grains with folic acid have found that supplementation is associated with a significant (20–25%) reduction in NTD rates. Observational studies also suggest that rates of other types of congenital anomalies (heart and orofacial) have fallen since supplementation began.

There may be an added benefit for adults. N5-Methyltetrahy-drofolate is required for the conversion of homocysteine to methionine (Figure 33–2; Figure 33–3, reaction 1). Impaired syn-thesis of N5-methyltetrahydrofolate results in elevated serum concentrations of homocysteine. Data from several sources sug-gest a positive correlation between elevated serum homocysteine and occlusive vascular diseases such as ischemic heart disease and stroke. Clinical data suggest that the folate supplementation program has improved the folate status and reduced the preva-lence of hyperhomocysteinemia in a population of middle-aged and older adults who did not use vitamin supplements. There is also evidence that adequate folic acid protects against several cancers, including colorectal, breast, and cervical cancer. 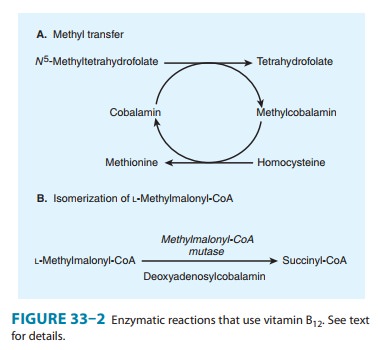