The newborn infant lives in an interactive world but one that is free of moral directives or structure.

The newborn infant lives in an interactive world but one that is free of moral directives or structure. However, by the second year of life, the emergence of “moral emotions’’ such as empathy, pride, embarrassment, shame and guilt demonstrates that the be-ginning of a code of moral behavior, in the most primitive sense, is being established. Moral emotions evoke a sense of shared ex-perience with important others that is central to the process of moral internalization. By 36 months, most children demonstrate the internalization of parental standards even when their parents are not available to provide cues or reinforcement. The impor-tance of emotions in the early evolution of moral behavior during the preschool years represents a distinct departure from the more traditional perspective that moral development does not occur until the establishment of concrete operation.

During the school years, the importance of rules and adher-ing to them becomes well defined. The moral code tends to be one of absolutes with strong consequences for transgressors. Extreme examples of children turning their parents into authorities be-cause of political resistance provide a sobering perspective on the strength of the convictions of some children. However, for most boys and girls during this period, interpersonal relationships with 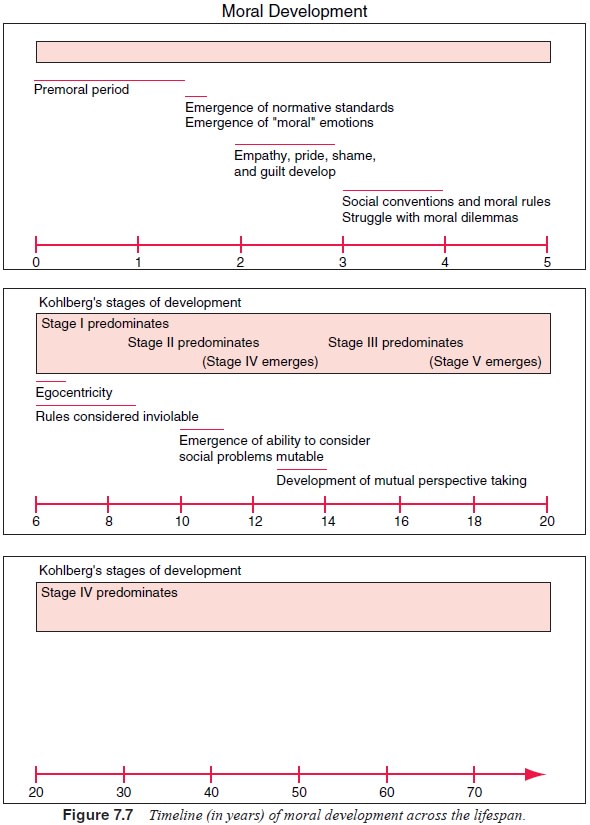 peers or siblings are a consideration in the determination of “cho-sen outcomes’’ when situational paradigms designed to clarify moral priorities are presented (Smetana et al., 1991). There appears to be some gender difference in the quality of mercy demonstrated during the school years. Girls are more concerned with aspects of human interaction and boys preferentially seek blind justice.

The later evolution of moral principles is a complex pro-cess. With the development of abstract reasoning, adolescents progress through Kohlberg’s (1964) stages of conventional mo-rality, which entail meeting the expectations of others (stage 3) and subsequently accepting the maintenance of societal norms and rules as an appropriate standard (stage 4). These stages do not progress in a strictly sequential manner. Stages 5 and 6, which ultimately lead to the conviction that moral principles of justice should supersede those of human-made laws, have not been eas-ily codified either, given the influence of complex emotions on behavior and the well-documented moral inconsistencies that oc-cur over the course of adult development (Gibbs, 1979).

A timeline of moral development during the course of the lifespan is presented in Figure 7.7.