The study of cognitive development provides a perspective on the evolution of the capacity to think.

The study of cognitive development provides a perspective on the evolution of the capacity to think. Increased cognitive abili-ties are an integral component required for the onset of language. Changes in thinking ultimately shape the course of emotional, social and moral development. Recent investigations of the re-lation of brain development to cognitive development have at-tempted to attribute specific developmental changes in central nervous system function with the achievement of new cognitive abilities (Casey et al., 2000; Anderson, 2001).

However, the acquisition of mental abilities has been charted as an independent sequence of mental accomplishments. Piaget es-tablished the field of cognitive development, and his stage theory of the evolution of cognitive processes has dominated this field (Piaget and Inhelder, 1969). Although specific aspects of his four primary stages have been modified by subsequent empirical experi-ments as well as by the development of a greater appreciation of the role of emotions and context in the utilization of cognitive abilities, his careful observations and brilliant deductions have provided the framework on which much of our knowledge of cognitive develop-ment has been built. In contrast, Vygotsky (1978) provided a model of early cognitive development that placed greater importance on the influence of culture and language-mediated guidance by adults

Piaget introduced the concept of “schemas’’ which he defi ned as units of cognition. He further described processes that result in schema modifi cation, which begin in infancy as a child assimilates new information and accommodates to novel stimuli. A particularly important Piagetian concept has been that of a decalage within cognitive development, which refers to an unevenness in cognitive development. For example, a child may demonstrate cognitive abilities at the concrete operational stage  of development with regard to conservation of volume and at the same time retain preoperational forms of thinking such as per-sistent egocentrism. Such an unevenness can also be seen across lines of development.

Even newborns have the ability to learn through making associations between different states or experiences. There is evidence that cognitive “prewiring’’ exists, which allows for the perceptual capacities of infants that are necessary to seek stimu-lation and interaction with adult caregivers. A key capacity re-quired for these early cognitions is recognition of the invariant features of perceptual stimuli coupled with the ability to translate these invariant features across sensory modalities. Interestingly, infants can differentiate the human voice from other sounds in-nately without “learning’’ the complex characteristics of the structure and pitch of speech.

By 2 to 3 weeks of age, cross-modal fluency is demon-strated by the ability of infants to imitate facial expression. This requires the recognition of a visual schema of a facial expression to be linked with a proprioceptive tactile schema of producing a facial expression. By 3 months of age, infants can be classically conditioned, and their interest in stimuli led Piaget to suggest this was a period dominated by attempts to make “interesting spectacles last’’ (Piaget and Inhelder, 1969).

By 6 months of age, associations between “means’’ and “ends’’ have been demonstrated. This is followed by object per-manence, which evolves during the second half of the first year. During the second year, infants can infer cause after observing an effect as well as anticipate effects after producing a causal action. A corollary of this new ability is that they are now able correctly to sequence past events.

By the third year of life, children enter the preoperational stage. This form of thinking is more similar to adult cognition, but it incorporates magical explanations and is marked by a tendency to focus on one perceptual attribute at a time (centra-tion). Idiosyncratic cosmological theories are common and are usually dominated by transductive reasoning, which attributes causality based exclusively on temporal or spatial juxtaposition. Throughout the preschool period, attention span and memory are limited while pretend play and fanciful thinking are common. Animism is frequently used and refers to endowing inanimate objects with the qualities of living things. Not surprisingly, chil-dren having imaginary friends and talking pets characterize this cognitive period. The preoperational stage is also the time dur-ing which explosive language development occurs. This develop-ment appears to be made possible by a genetically determined capacity for language. However, language development is clearly enhanced by experiential support and parental communication that is sensitive to the child’s ability to process new words and grammatical structure.

By age 6 or 7 years, children begin to use operational think-ing. The child who has attained concrete operational thought has the ability to conserve both volume and quantity as well as being able to appreciate the reversibility of events and ideas. A shift from an egocentric perspective results in a new capacity to appre-ciate the perspective of others. These new cognitive skills dem-onstrate an ability to engage in logical dialogue and to develop an appreciation of more complex causal sequences. These new cognitive abilities are clearly required for a child to benefit from the grade school curriculum.

Adolescence results in the development of a new processing capacity that involves the manipulation of ideas and conceptsFurthermore, the informational fund of knowledge is dramatically expanded and serves as a referent for verification of new data that are assimilated. A final major transition is possible with the development of the ability to reflect on cognition as a process. This is referred to as the development of a metacognitive capacity. Achievement of this capacity allows adolescents to understand and empathize with the divergent perspectives of others to a greater degree than was previously possible. This capacity is necessary for recursive thinking which involves an awareness that others can think about the domain of the adolescent’s own thought. These cognitive skills represent the transition into the final stage of cognitive ability, which is referred to as the use of formal operations. One capacity characteristic of this stage is the ability to understand complex combinatorial systems that require a well-developed sense of reversibilities that include inversion, reciprocity and symmetry. New levels of problem solving are achieved that include the ability to recognize a core problem or core isomorph within a more complex new problem. The adult with formal operational ability can recognize a previously successful solution and use this knowledge to develop a parallel innovative solution to the complex problem. It is important to appreciate that many adults remain at the stage of concrete operations and never develop these more advanced capacities.

A timeline of cognitive development during the course of the lifespan is presented in Figure 7.3. 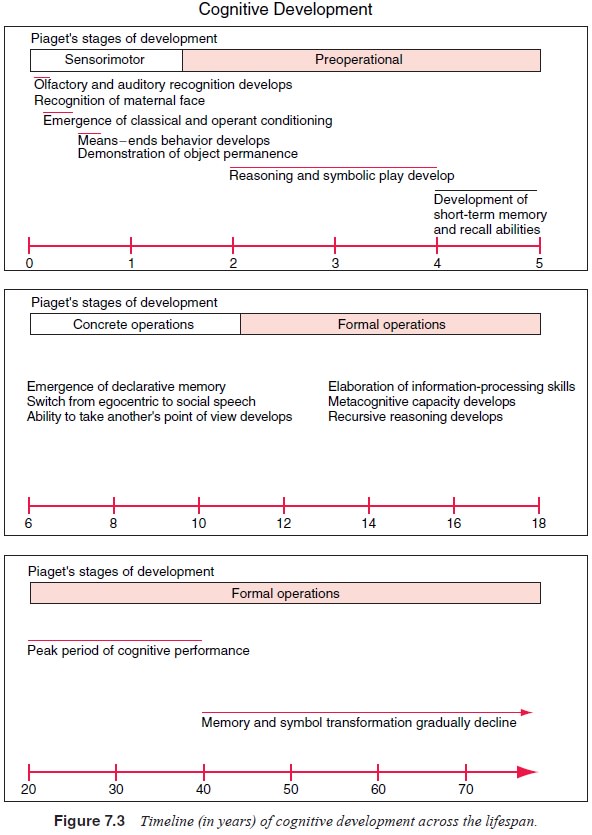