The emotional state of the newborn is largely assessed by facial expression and accompanying vocalizations.

The emotional state of the newborn is largely assessed by facial expression and accompanying vocalizations. However, the communicative capacity of young infants has become increasingly well appreciated. In the first weeks of life, contentment and distress have been reliably monitored (Lewis, 1994). These primary emotions further differentiate during the first months of life. It is clear from work beginning in the late 1960s and 1970s that the infant is not a passive recipient of external influences, a tabla rasa or blank slate. Freud’s idea about a stimulus barrier, which was postulated to protect a young infant from overstimulation, and Mahler et al., (1975) notion that the first 2 months can be conceptualized as a relatively autistic phase of development are no longer supported. By 7 to 9 months, a transition occurs that is based on the earliest attainment of intersubjectivity. At this point, infants begin to understand that their own inner experiences and feelings can be appreciated by other individuals (Trevarthen, 1979; Emde, 1984). This leads to the possibility of developing affect attunement as parents match their own behavior with the behavior of their infant, while experiencing shared internal feeling states. An infant pouting to elicit a parental response evidences the instrumental use of emotions. Social referencing is usually evident by 12 months of age, when infants turn to examine their mothers’ facial expressions at times when they are confronted with potentially fearful situations or objects (Klinnert, 1984).

In the second year of life, the rapprochement crisis oc-curs, as infants become aware of their separateness from their primary attachment figure and the limitations of their control on her behavior. After the infant has attained self-cognition, new, more complex emotions of embarrassment and envy emerge that further evolve to feelings of shame, pride and then guilt by the end of the second year. Object constancy, or the ability to reduce anxiety in response to the separation from the primary caretaker, reflects the association of an emotional state with the memory of the sense of internal security provided by the attachment figure.

The role of implicit memory through the experience of synchrony, reciprocity and affect attunement between parent and infant in numerous modalities is substantial in early emotional development and has been related to sense of self and emotional regulation. Affect attunement beween mother and infant in-volves an emotional interchange in which the mother matches her behavior to the infant’s behavior. This matching is not merely imitative but involves some aspect of the internal feeling state that is shared. An attuned mother exaggerates her responses which allow the infant to begin to recognize his own emotional response as being separate from that of his mother’s. Affective attunement appears to be an essential ingredient of empathy, in-timacy, mirroring and other clinical phenomena. Fonagy’s (2001) concept of mentalization is predicated on the mother’s ability to promote both relatedness and separateness in the infant through her marked affective responses. Mentalization is the capacity of the infant to ascertain the mental states of the self and of others. It describes a process of the infant’s recognition that someone else has a different mind from his own. It is acquired through repeated experiences in judging facial expression, tone of voice and other nonverbal communications. These experiences are en-coded in implicit (nondeclarative) memory and in parallel with explicit (declarative) memory which has a temporal dimension. This is a critical accomplishment in that it establishes the ba-sis for secure attachment. Conversely, the failure to mirror the child’s affective state often results in disorganized attachment through problematic internalization and therefore less than op-timal identity formation and individuation. These infants are at extreme risk for attentional, behavioral and emotional distrur-bance in early childhood often with enduring consequences in development at later stages of childhood, adolescence, and even adulthood.

During the preschool years, children begin to learn the na-ture of the relationship between emotions and behaviors. They begin to understand the culturally defined rules associated with affect expression and consequently begin to mask their emotions. This is also the period when the Oedipus impulses are most evi-dent and children must deal with both their conscious attraction to the parent of the opposite sex and their fear of potential retali-ation from the same-sex parent.

As children move into the school years, they experience the full range of adult emotions, although there is at least a qualita-tive sense that during the prepubertal period there is less intense expression of affect. Although sadness is easily recognized from the second year of life, prolonged periods of depressed affect arc rare during this period. However, temperamental styles tend to emerge and, specifically, behavioral inhibition can become more clearly appreciated within the context of increasing social and educational demands (Kagan et al., 1989).

In adolescence, emotions are more intensely displayed. Capacities for abstraction permit adolescents to consider factors outside their own immediate emotional experience and they are, therefore, more emotionally interactive than at any previous pe-riod of development. Emotions in adolescence exert an increas-ingly important role in guiding behavior and become a sustaining motivation for behaviors and mediate relationships with peers and family. During this period, there is an emergence of a greater incidence of affective disorder and anxiety. Similarly, there is a dramatic increase in suicidal behavior that is in part associated with cognitive ability. At this point, there is a greater reflection on aspects of existential crisis, which can be experienced from more complex vantage points. 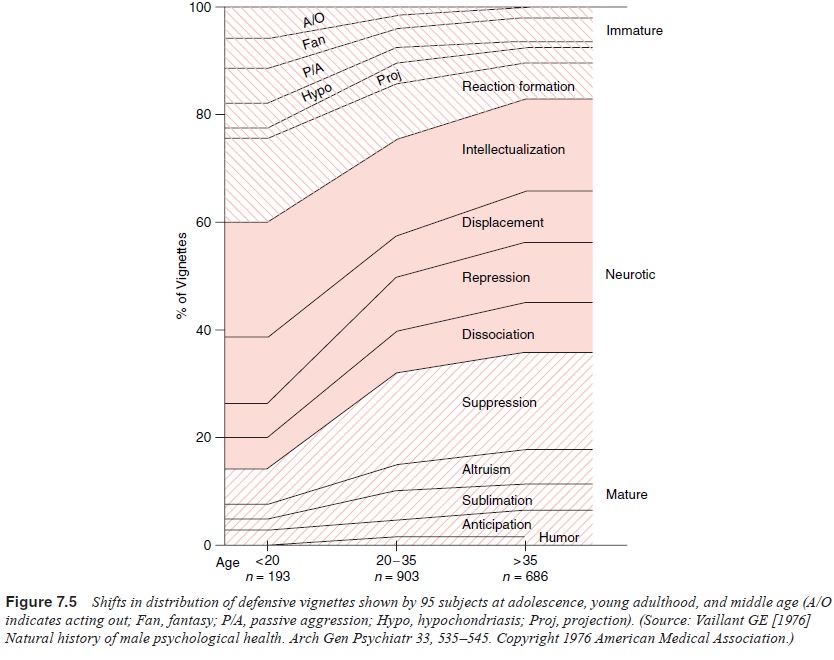 A perspective on the evolution of defense mechanisms as regulators of affect suggests that a hierarchy of more sophis-ticated and effective defensive strategies emerge throughout adolescence and adulthood (Vaillant, 1993). Figure 7.5 illustrates the evolution of defense mechanisms during adulthood. A time-line of emotional development during the course of the lifespan is presented in Figure 7.5.