The risk and protective factor model is a paradigm that facilitates the understanding of developmental deviations.

The risk and protective factor model is a paradigm that facilitates the understanding of developmental deviations. It can be applied at any stage of development. Risk factors have been divided into three large categories: those at the level of the individual, the family and the community

The first category of risk factors is defined at the level of the individual. Both physical and emotional considerations are relevant. Examples include atypical genetic polymorphisms, defi-cits in perception and high levels of generalized anxiety. Variable possibilities for adaptation exist, but for a trait or condition to be considered a risk factor there must be a demonstrated increase in the probability of subsequent emotional or behavioral disorder associated with the factor.

The second category of risk factors is conceptualized at the level of the family. One of the classic examples of a familial risk factor is a parent with a serious mental illness. It is difficult to de-fine the mechanism by which this risk is transmitted. Each parent provides exactly one-half of the genome of the child. However, par-ents are also in a powerful position to shape the early environment of their children. The full range of family risk factors is quite broad, and extends beyond the influence of single individuals within the family to include the impact of family dynamics which influence the development of the child. For example, a scapegoated child in a family environment that tolerates overt child maltreatment is at particularly high risk for the development of psychopathology.

The third category of risk factors is defined at the level of the community. Discrimination based on ethnic or racial status falls into this group of risk factors, as does social disadvantage. Although there is little controversy regarding the negative consequences of discrimination and poverty, the quantification of this risk has been problematic. Community risk factors rarely occur in the absence of individual and familial risk factors, making it difficult fully to understand their specific influence. Table 7.6 elucidates some important developmental risk factors.

One strategy that has been used to determine the overall risk for developmental psychopathology is to add up the specific factors that a child must deal with, creating an adversity index. This has been accomplished for young children (Sameroff, 1986) as well as applied to risk factors occurring later in development (Rutter, 1985a, 1985b). Most individuals can cope with a small number of risk factors, particularly if protective factors are also present. However, under the weight of multiple risk factors, most individuals begin to show signs of disturbance. Sophisticated research designs have been developed to estimate relative contributions (Topolski et al., 1997). Curiously, the quantitative effects of protective factors have been less extensively studied, although investigations into the life course of resilient individuals provide some understanding of these factors (Mrazek and Mrazek, 1987).

Resilient children represent one of the most fascinating opportunities to understand the mechanisms by which risk and protective factors interact. The study of the children of mothers with schizophrenia or bipolar disorder has been an area of inves-tigation that is of particular interest to psychiatrists. Perhaps this is because these children have been perceived to have had both a high risk for the inheritance of genes that confer poor adap-tive skills and the misfortune of having a parent with impaired capacities for sensitive responses to their early developmental needs. What is striking is that some of these children turn out to be productive and happy adults despite what appear to be over-whelming odds.

In adulthood, resilience depends on the ability to find, use and internalize social supports. Throughout the life span, maturity of ego defense is an important characteristic of resilience (Vaillant, 1993). The use of mature defenses has been associated with health – whether health was defined as the presence of successful objective life adjustment, the absence of psychopathology, or the achievement of subjective self-satisfaction. The number of risk and protective factors appears to be more significant than the specificity of stressors.

A timeline of the development of psychopathology during the course of the lifespan is presented in Figure 7.8. 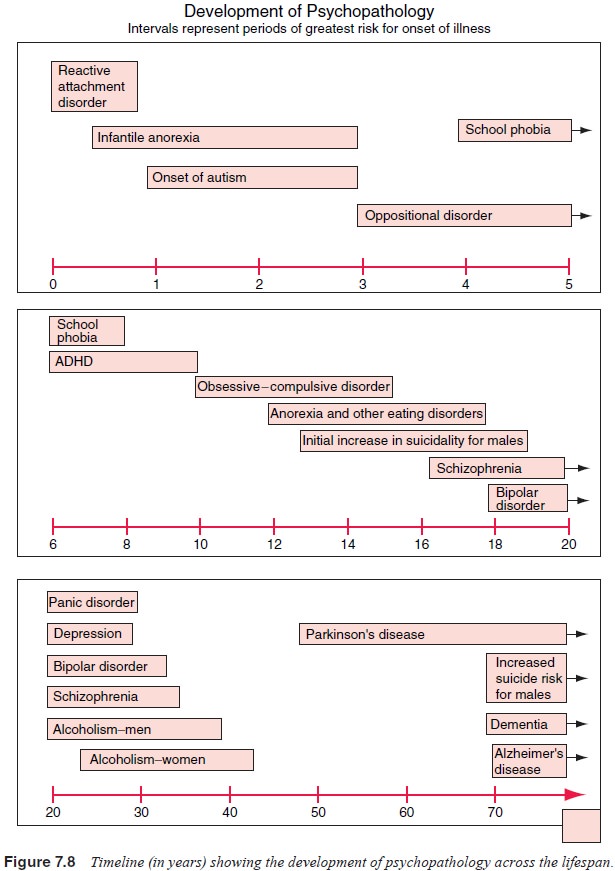