The genes that an individual possesses contain all of the informa-tion required to define the individual.

The genes that an individual possesses contain all of the informa-tion required to define the individual. Some genes have strong pen 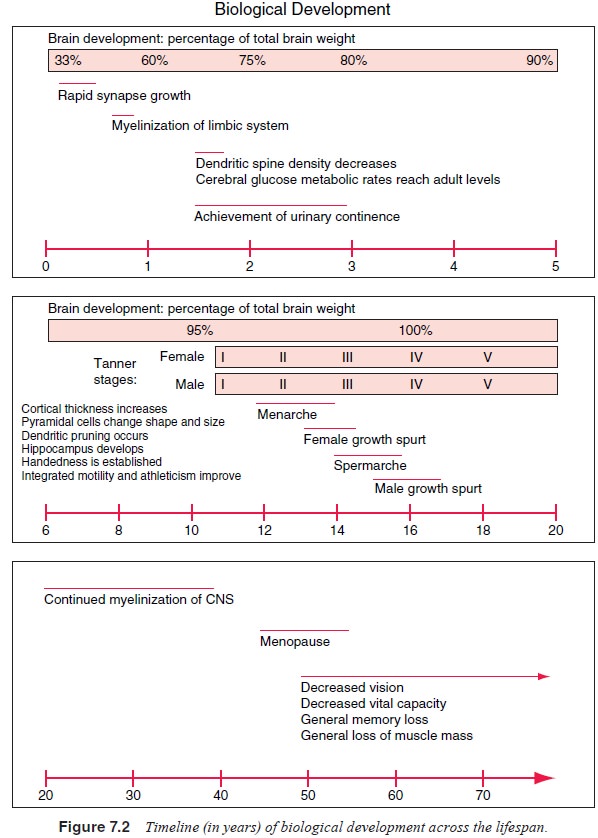 etrance and express themselves in virtually all environments. This is the traditional view of the influence of genes, which if taken lit-erally leads to the erroneous conclusion that any genetic influence is immutable. It is now clear that many genes have only partial penetrance and that there are both physical and emotional–envi-ronmental factors associated with the expression of these genes.

In considering the biological development of an individ-ual, it is apparent that single genes that control such critical func-tions as physical growth have a high degree of penetrance in a wide range of environments. For example, while malnutrition, maltreatment and medications can retard growth, genes have a powerful impact on adult height. This is demonstrated by the observation that monozygotic twins are nearly identical in adult height. Interestingly, the same is not true of weight, which sug-gests that a wider range of environmental factors lead to adult variation in weight. In monozygotic twin pairs, adult weight can vary by more than 20%, although the majority of twins are actu-ally much closer in size.

A timeline of biological development over the course of the lifespan is presented in Figure 7.2

Brain growth is one of the most basic indicators of neurological development. The brain is already at approximately one-third of its adult size at birth, and it grows rapidly, reaching 60% by approximately 1 year and 90% by 5 years of age. The final 10% of growth occurs during the next 10 years with attainment of full weight by 16 years of age. The processes of myelinization, synapse proliferation and synaptic pruning occur in the course of the lifespan, but they are particularly active in the first years of life when the functional structure of the brain is becoming defined. Maximumsynapticdensityisreachedatdifferentdevelopmenttime points in different brain regions. Maximum density in the auditory cortex is achieved by 3 months, whereas maximum density in the middle frontal gyrus is not reached until 15 months of age (Huttenlocher and Dabholkar, 1997). After this point, the density of dendritic spines generally decreases as glucose metabolism becomes fully developed. The establishment of biological rhythms occurs in early infancy and sleep becomes more organized and of shorter nocturnal duration. A stable pattern of temperament cannot be documented in the first months of life, but it gradually becomes established during the second year. All of the major theories of temperament endorse the idea that temperament is rooted in biological differences (Goldsmith et al., 1987). The most influential view has been that of Thomas and colleagues (1968). In the New York Longitudinal Study which viewed temperament as a child’s behavioral style, the “how’’ of behavior as opposed to its content or motivation. This work addressed dimensions such as activity level, intensity of emotional expression, adaptability to changes in routine and the tendency to approach or avoid novel situations. This work elucidated distinct temperament clusters, the easy, slow to warm-up and difficult child. The difficult child was characterized as having a negative mood, irregular biological rhythms, slower adaptability, intensity of reactions and a negative response to novelty. Difficult children often express early behaviors that are correlated with later school problems, social difficulties and psychiatric disorders. Behavioral inhibition isa trait that has been reliably identified after 18 months and has been associated with the Hypothalamic-Pituitary-Adrenal (HPA) axis activation and right frontal asymmetry (Fox et al., 2001), the latter being predictative of social wariness at 4 years for boys more so than girls (Henderson et al., 2001). During the preschool period, individual neurons and neural networks are preferentially preserved if they receive stimulation. Motor skills emerge as a reflection of the underlying neuronal development of the central nervous system.

By the age of 7 years, considerable sensory integration has occurred. Handedness has been clearly established, and brain plasticity has decreased. By 10 years of age, limitations in the ability to learn to speak an unaccented second language reflect further changes in the development of the motor linguistic pathways. In the years of adolescence, full brain weight is achieved, but myelinization continues well into the fourth decade. As well, the dorsolateral prefrontal cortex (DLPFC) has a protracted developmental course, given that its functional specificity is not fully determined until puberty. By the end of the fifth decade, there is often evidence of the beginning of decline in specific neuronal functions, with vision and memory being particularly vulnerable. However, integrative capacities may reach a peak during the later decades.

While interesting changes in hormonal development occur in the first years of life, dramatic changes in both physical and emotional functions are triggered by the hormonal shifts associated with pu-berty that characterize the adolescent years. In girls, estradiol and progesterone production results in the onset of breast development, followed by the onset of pubic hair growth and vaginal elongation. Axillary hair subsequently develops during stage 3 of pubic hair de-velopment. Although there is wide variability in different cultural environments, menarche is usually attained 2 years after the onset of breast development and has been reported to occur at an average of 12.8 years of age in population studies (Zacharias et al., 1976), the range is between 10–16 years. Menarche appears to be affected by nutrition, genetic endowment, general health status and environ-mental factors such altitude and light. In boys, puberty begins when rising levels of pituitary hormone result in enlargement of the testes and subsequent increases in circulating testosterone. Spermatogen-esis occurs after testicular enlargement at approximately 14 years of age. Pubic hair development is triggered by adrenal androgens and occurs in five stages during the course of about 2.5 years. Facial hair tends to develop between 14 and 15 years of age.

Growth hormone and gonadal hormones are both neces-sary to initiate the adolescent growth spurt. This occurs earlier in girls, usually during Tanner’s breast stages 2 and 3, whereas in boys it does not occur until stage 4 of genital development. Both an acceleration of bone growth and a maturation of the skeletal structure as reflected by increased bone density and closing of epiphyses occur during this process.

Sexual function peaks early in the adult years in men but there is only a gradual decline in sexual function as measured by frequency of orgasm from 20 to 70 years. Women have consistentsexual functioning throughout the childbearing years and fre-quently become more orgasmic in their 30s. However, decreases in estrogen levels associated with menopause usually occur be-tween 45 and 54 years of age. Men have no comparable meno-pausal change in hormonal levels.