Cancer is the second-leading cause of death in the United States with one of every four deaths attributable to cancer.
Monoclonal Antibodies in Cancer

Cancer is the second-leading cause of death in the United States with one of every four deaths attributable to cancer (Jemal et al., 2006). However, when mortality rates were considered on the basis of age, cancer began to surpass heart disease as the leading cause of death for persons younger than 85 years starting in 1999 (Jemal et al., 2006). Survival rates have improved only modestly over the last several decades (e.g., 5 year relative survival rates from 1995 to 2001 were 65% compared to 50% from 1974 to 1976) with most survival advances occurring through earlier detection of cancer rather than through treatment advances (American Cancer Society, 2006). New treatments that can exploit intrinsic differencesbetween normal and neoplastic cells are needed to offer patients additional options besides traditional treatment modalities of surgery, radiation, and che-motherapy (Zangmeister-Wittke, 2005). Therapeutic monoclonal antibodies represent a new type of treatment that can be used to improve overall survival, increase the time to progression, and delay the time to recurrence of many oncologic diseases. These drugs will provide many treatment alternatives for cancer patients.

Because of the high incidence, morbidity, and mortality rates associated with cancer, staying abreast of emerging therapeutic innovations in cancer care are paramount for health care professionals and scientists, both professionally and personally. This chapter summarizes pertinent points about the currently approved oncologic monoclonal antibodies in the United States. Antibodies are organized based on their target [i.e., CD cell, epidermal growth factor receptor (EGFR), and vascular endothelial growth factor (VEGF) receptor]. Table 1 summarizes the current FDA approved monoclonal antibodies for cancer indications, year of approval, their origin and target, and appropriate indications that will be discussed (Adams and Weiner, 2005). 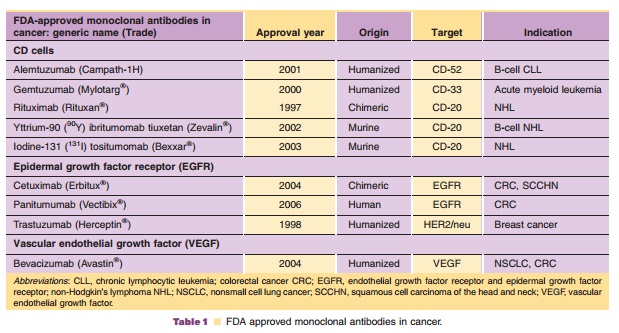