Rituximab (Rituxan ) was approved for use in 1997 and was the first MAb approved for the treatment of cancer. It is a chimeric MAb that binds to the antigen CD20 (cluster of differentiation 20), which is found on B-lymphocytes (B-cells). Rituximab is approved in the United States for the following indications: treatment of relapsed or refractory, B-cell CD20-positive, low grade or follicular NHL; first-line treatment of follicular or diffuse large B-cell (DLBCL) CD20-positive NHL in combination with chemotherapy; treatment of low grade, CD20-positive B-cell NHL in patients achieving a response or stable disease to first-line chemotherapy; and, in combination with metho-trexate for the treatment of moderate to severe rheumatoid arthritis (Genentech, 2006c). This last indication speaks to the many present and future nononcology uses of this MAb. However, the non-oncology uses will not be discussed here.

The antigen CD20 is found on all normal B-cells and most malignant B-cells (Maloney et al., 1994). CD20 is the human B-lymphocyte-restricted differ-entiation antigen, Bp35, and is a hydrophobic trans-membrane protein (ASHP, 2002). CD20 is involved with cell cycle initiation regulation and differentiation by activation of B-cells from the GO (resting) phase to the G1 (gap 1) phase, and CD20 has also been shown to operate as a calcium ion channel (Golay et al., 1985; Maloney et al., 1994; Kanzaki et al., 1997; Maloney et al., 1997a; Genentech, 2006c). Rituximab is thought to mediate death of CD20 positive tumor cells through several mechanisms, as shown in Figure 2. Specifically, antibody-dependent cell-mediated cyto-toxicity, direct effects via CD20 ligation, and comple-ment-mediated lysis are all believed to play a role (Maloney et al., 1997b; Genentech, 2006c). 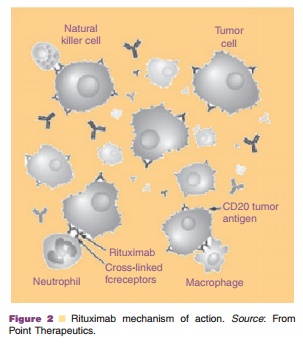 The pharmacokinetics of rituximab were studied in patients with NHL. They were given a dose of 375 mg/m2 IV weekly for 4 weeks. The mean serum half-life increased throughout the study (76.3 hr after the first week to 205.8 hr after the fourth week). This increase is thought to occur secondary to depletion of the CD20 antigen. Without an antigen to bind to, rituximab’s clearance will be reduced. After 4 weeks of treatment, rituximab may be detectable in a patient’s serum for up to six months.

After 8 weeks of weekly rituximab infusions using the same dose, the mean maximum concentra-tion was found to increase from 243 mg/mL after the first infusion to 550 mg/mL after the eighth infusion (Genentech, 2006c).

As mentioned above, depletion of B-cells, via the CD20 antigen, can be extensive and prolonged. In one study of 166 patients, B-cells were depleted within the first three doses of rituximab and the depletion was maintained throughout 6 to 9 months in the majority of patients. B-cell levels should return to normal levels by twelve months after the last dose of rituximab (Genentech, 2006c).

When B-cells become activated, they turn into plasma cells and secrete immune globulins. Therefore, depletion of immune globulins has also been exam-ined. Statistically significant reductions in IgG, IgM, and IgA have been observed. However, in the majority of cases, the levels remain in the normal range (Genentech, 2006c).

Perhaps the most studied chemotherapy used in combination with rituximab is the CHOP regimen of cyclophosphamide, doxorubicin, vincristine, and pre-dnisone. CHOP had been considered the gold standard for treatment of DLBCL until the combina-tion trials became published in the late 1990s and early 2000s. A major study released in 2002 compared the addition of rituximab to CHOP versus CHOP alone in elderly patients with DLBCL (Coiffier et al., 2002). It demonstrated the combination provided statistically significant increases in CR, event-free survival, and overall survival, without increasing treatment-related toxicity. A review of rituximab in combination with chemotherapy regimens (mostly CHOP or CHOP-related regimens) show the ranges of OR and CR to be 29–100% and 11–85%, respectively (Cersosimo, 2003a).

Rituximab is also used in conjunction with a MAb designed with a conjugated radionuclide. This radioimmunotherapy allows radiation to be deliv-ered directly to the tumor site and limits the radiation exposure and adverse effects to healthy tissues. Yttrium-90 (90Y) ibritumomab tiuxetan (Zevalin ) was the first radioimmunoconjugated MAb approved by the FDA for treatment of relapsed or refractory follicular, low-grade, or transformed NHL. Rituximab is used in the 90Y ibritumomab tiuxetan therapeutic regimen to clear the peripheral blood of CD20 found on normal B-cells. This facilitates better binding of the 90Y ibritumomab tiuxetan to the CD20 antigen located on the tumor cells. Another radioimmunoconjugated MAb, iodine-131 (131I) tositumomab (Bexxar ), uti-lizes a similar therapeutic regimen, however, tositu-momab is used to clear the peripheral blood of CD20 instead of rituximab.

To date, there have been no head-to-head trials comparing these two radioimmunotherapies. How-ever, 90Y-ibritumomab tiuxetan was compared to rituximab in a randomized controlled, phase III trial for rituximab-naı¨ve patients with relapsed or refrac-tory low-grade, follicular, or transformed B-cell NHL (Witzig et al., 2002). 90Y-ibritumomab tiuxetan was shown to produce a statistically significant increase in CR (30% vs. 16%) and OR (80% vs. 56%, p¼ .002). Inspite of this, the study did not demonstrate a difference in time to progression.

Adverse effects of MAbs can generally be determined by examining their international nonproprietary names (INN) and becoming familiar with their mechanisms of action. Because rituximab is a chimeric MAb and contains mouse protein, infusion-related events would be expected. In fact, infusion-related reactions, such as fever, chills, and myalgias, along with hypersensitivity reactions, such as bronchos-pasm, hypotension, and angioedema, have occurred during rituximab infusions. Patients are more likely to experience these reactions when receiving their first infusion of rituximab. The incidence decreases with subsequent infusions. Premedication with diphenhy-dramine and acetaminophen are recommended for all infusions.

Rituximab’s package labeling contains a black box warning regarding three reactions: fatal infusion reactions, tumor lysis syndrome (TLS), and severe mucocutaneous reactions. The majority of fatal infusion reactions occur in relation to the first infusion. At any time an infusion reaction is expected, the rituximab infusion should be discon-tinued immediately. TLS has been reported to occur in patients with NHL who have received concomi-tant cisplatin and have had a high tumor burden. It may result in acute renal failure or death. Severe mucocutaneous reactions, such as Stevens-Johnson syndrome and toxic epidermal necrolysis have occurred within 1 to 13 weeks after receiving rituximab. Patients who experience a severe muco-cutaneous reaction should not receive rituximab in the future (Genentech, 2006c).

Administration of rituximab should only be by IV infusion. The first infusion should be started at 50 mg/hr and titrated up to a maximum of 400 mg/ hr through increasing increments of 50 mg/hr every 30 min. If the patient tolerated the first infusion, subsequent infusions may be titrated faster. It is recommended to start subsequent infusions at 100 mg/hr, increase by 100 mg/hr every 30 min (if tolerated), up to a maximum of 400 mg/hr (Genentech, 2006c).

Due to the limited scope of this chapter, the two conjugated MAbs, Yttrium-90 (90Y) ibritumomab tiuxetan and iodine-131 (131I) tositumomab, have only briefly been mentioned in the context of clinical efficacy section involving rituximab therapy. Theseagents have a limited therapeutic scope as their primary use is in radioimmunotherapy for treating indolent NHL. From the nomenclature section dis-cussed earlier in this chapter, it is clear that Yttrium-90 (90Y) ibritumomab tiuxetan comprises the murine I g G1 M A b i b r i t u m o m a b t h a t i s l i n k e d t o the radioisotope yttrium-90 by stable chelation via  the linker, tiuxetan (Hagenbeek and Lewington, 2005). Ytrrium-90 is a beta-emitter of high energy with a long half-life (64 hr). The drug is given as a single treatment consisting two components given approximately 1 week apart (i.e., rituximab administration followed by90Y-ibritumomab tiuxetan. Rituximab acts to reduce the number of healthy B-cells so that 90Y-ibritumomab tiuxetan will not destroy noncancerous cells. When 90Y-ibritumomab tiuxetan is administered, it attaches to the CD20 proteins on the cell surface of B-cells and releases energy from the ytrrium radio-isotope, killing the B-cell. Patients with normal platelet function (i.e., > 150 109/L) should receive 0.4 mCi per kg of body weight up to a maximum of 32 mCi. Those with a platelet count between 100 and 149 109/L should receive a reduced dose of 0.3 mCi/kg, which has been shown to have equal efficacy to higher doses (Hagenbeek and Lewington, 2005). The main safety concerns include myelosuppression with nadirs reached in 4–8 weeks after administration of therapy.

Iodine-131 tositumomab is another conjugated MAb that acts in a similar mechanism to 90Y-ibritumomab tiuxetan although it emits both beta and gamma radiation. Specifically, it binds to the CD20 antigen found on B-cells to kill them via two mechanisms; 1) activating an immune host response to B-cells and 2) causing apoptosis in B-cells to which it is bound as shown in Figure 3 (Biodrugs, 2003; GlaxoSmithKline, 2006).