Alemtuzumab is an unconjugated, humanized, IgG1 kappa monoclonal antibody (MAb) directed against the 21–28 kDa cell surface glycoprotein CD52 (Frampton and Wagstaff, 2003). Most lymphocytes (including 95% of B- and T-cells at various stages of differentiation), monocytes, natural killer cells, 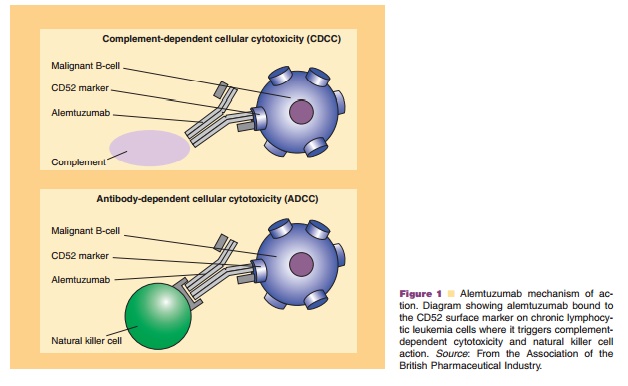 macrophages and eosinophils, as well as cells lining the distal epididymis, vas deferens, and seminal vesicles in the male reproductive tract express CD52; however, it is not found on erythrocytes, platelets, or stem cells (Lui and O’Brien, 2004; O’Brien et al., 2005). In addition, while CD52 is highly expressed in some forms of chronic lymphocytic leukemia (CLL), non-Hodgkin lymphoma (NHL), and acute lymphoblastic leukemia (ALL), it is not shed or internalized, making it an excellent therapeutic target (Lui and O’Brien, 2004). Recent studies have found that malignant CD52 expression occurs in not only CLL, low-grade lympho-mas, and T-cell malignancies, but also some cases of myeloid, monocytic, and ALL; thus, use of alemtuzu-mab is expanding to a variety of disease states (O’Brien et al., 2005). The compound exerts its effect by binding to CD52 antigenic sites and stimulating cross-linking by antibodies, which promotes antibody-dependent cellular cytotoxicity and direct cellular apoptosis via natural killer activity as shown in Figure 1 (Greenwood et al., 1994; O’Brien et al., 2005).

Pharmacokinetic parameters of alemtuzumab have been investigated in a phase I dose-escalation trial. Patients with B-cell CLL and NHL were given alemtuzumab once weekly for a maximum of 12 weeks, and plasma levels were obtained. Patients who received higher doses exhibited higher values for maximum plasma concentration (Cmax) as well as area under the curve (AUC), demonstrating dose-depen-dent proportionality. The median half-life (t1/2) was approximately 12 days (Berlex, 2005). A subsequent pharmacokinetic analysis was conducted in CLL patients who received 30 mg intravenous alemtuzu-mab thrice weekly. While much interpatient variability was observed, patients exhibited a trend of gradually rising plasma concentrations during initial therapy, which continued until steady-state was achieved. This typically occurred after 6 weeks. Authors noted that the rise in alemtuzumab concentrations corresponded to a simultaneous decline in circulating CD52-positive malignant lymphocytes (Berlex, 2005).

In addition to intravenous administration, alem-tuzumab has been given via the subcutaneous route (Hale et al., 2004). In one comparative study, 30 patients with relapsed CLL received intravenous alemtuzumab 30 mg thrice weekly, while 20 patients received similar doses subcutaneously. The authors noted that over time, maximal trough concentrations progressed to similar levels in both groups; however, accumulation of antibody in the blood was slower in the subcutaneous group, with these patients requiring slightly higher cumulative doses to achieve similar concentrations. In this study, the mean steady-state volume of distribution (Vd) among both groups of patients during initial treatment was 0.185 L/kg, which expanded to 0.252 L/kg during the terminal phase. This for a MAb comparatively large Vd is consistent with the notion that alemtuzumab distri-butes beyond the plasma compartment to encompass an extravascular lymphocytic compartment. Mean terminal half-life was 6.1 days in this population; however, clearance appeared to correlate with antigenic burden (Hale et al., 2004). Patients with undetectable CLL cells exhibited a single elimination phase with a longer half-life, whereas patients with bulkier tumors cleared alemtuzumab more rapidly. Authors concluded that the prevailing factor influen-cing alemtuzumab pharmacokinetic parameters ap-pears to be CD52 concentration, which accounts for a great deal of interpatient variability. Thus, alemtuzu-mab exhibits target-mediated drug disposition, and it is unsuitable to classify the pharmacokinetic parameters of alemtuzumab into a simple pharmacokinetic model (Hale et al., 2004).

While it is utilized in a variety of disease states, alemtuzumab is FDA-approved for use in B-cell CLL patients who have been treated with alkylating agents and failed fludarabine therapy. Three major studies have assessed alemtuzumab in this population (Osterborg et al., 1997; Keating et al., 2002a; Rai et al., 2002b). An international collaboration of centers in the United States and Europe published the largest of these studies. Ninety-two fludarabine-resistant patients, of whom 76% had Rai stage III or IV disease, were treated with 12 weeks of intravenous alemtuzumab (Keating et al., 2002a). The16 months. Patients with bulky lymphadenopathy were less likely to respond, possibly indicating poor tumor penetration of alemtuzumab (Keating et al., 2002a; Lui and O’Brien, 2004). Toxicity was moderate and consisted mainly of infectious problems and infusion reactions. Rai and colleagues (2002b) sup-ported these findings with a study evaluating 24 poor-prognosis, fludarabine-resistant CLL patients. After approximately 16 weeks of treatment with alemtuzu-mab (target dose 30 mg three times weekly), the OR rate was 33%. Median time to progression was 19.6 months.

Because of the high incidence of infusion-related reactions encountered with alemtuzumab intravenous infusion, subcutaneous administration has been ex-plored as a potential alternative. A pivotal trial evaluated subcutaneous alemtuzumab as first-line therapy in 41 patients with advanced, previously untreated CLL (Lundin et al., 2002). An OR rate of 87% was seen, with 19% CR. While injection site reactions were seen in 90% patients, these were grades 1–2 in severity, and typically disappeared with continued treatment (often within 2 weeks). The more severe infusion reactions encountered with intrave-nous dosing, such as dyspnea, hypotension, and nausea were absent; however, some patients did experience fever and rigors (Lundin et al., 2002; Mavromatis and Cheson, 2003).

Alemtuzumab has demonstrated some activity in other hematologic malignancies as well, including T-Cell prolymphocytic leukemia (PLL) and low-grade lymphomas (Pawson et al., 1997; Dearden et al., 2001; Keating et al., 2002b). An encouraging study by Pawson et al. (1997) evaluated 15 patients with refrectory T-cell PLL, most of whom had failed prior treatment with pentostatin. The response rate was 73%, with 60% patients achieving CR. These results have been subsequently investigated in other studies with T-cell lymphoma patients; response rates have consistently remained above 50%, even in heavily pretreated populations (Dearden et al., 2001; Keating et al., 2002b). It remains to be seen the extent to which alemtuzumab will play a role in the treatment of these disease states.

Another important application for alemtuzumab includes its use in CLL patients undergoing allogeneic stem cell transplant (SCT). In this setting, alemtuzu-mab has been effectively utilized in various roles, including nonmyeloablative SCT preparative regi-mens, graft-versus-host disease (GvHD) prophylaxis, and in vitro purging of T-lymphocytes prior to stem cell infusion. Because of its ability to specifically target CD52 antigen, alemtuzumab may deplete both donor and recipient T-lymphocytes, thus preventing acute and chronic GvHD while sparing the graft-versus-leukemia effect (Giralt, 2006). Studies have evaluated the addition of alemtuzumab to standard nonmyeloa-blative preparative regimens such as BEAM (Cull et al., 2000; Kottaridis et al., 2000; Faulkner et al., 2004). Faulkner and colleagues (2004) evaluated 65 patients with lymphoproliferative disorders under-going reduced-intensity allogeneic SCT in a multi-center study. Authors reported that 97% of patients achieved donor engraftment, with a low incidence of acute GVHD (grades 1–2 in 17%). Disease progression was the major cause of treatment-related failure; however, the incidence was low and corresponded to histologic grade of lymphoma (relapse risk was 10% at 2 years for low-grade lymphomas, but 68% at 2 years for high-grade NHL and mantle cell lympho-mas). Overall, the regimen was well tolerated, and transplant-related mortality was similar to other reports of BEAM conditioning regimens for autolo-gous transplants (7.6%) (Cull et al., 2000; Kottaridis et al., 2000). Authors concluded that alemtuzumab appears to be a safe and effective addition to the reduced-intensity SCT regimen.

Combination therapy with alemtuzumab has recently been explored; one study evaluated six patients with refractory disease who were treated with fludarabine and alemtuzumab concurrently (Kennedy et al., 2002). Five patients responded, with one patient achieving a CR. Additionally, sequential therapy with fludarabine followed by alemtuzumab has beenstudied; this combination, while associated with sig-nificant rates of infectious complications (12 of 57 pa-tients developed grade 3 or 4 infections during or after alemtuzumab treatment), patients who completed therapy showed significant response rates (Rai et al., 2002a). Thirty-six of the 57 patients enrolled finished both the fludarabine and alemtuzumab phases of treatment; this group achieved an OR rate of 92%, with 42% CR (Dearden et al., 2001). Another combination that has been explored is alemtuzumab with rituximab (Faderl et al., 2003; Nabhan et al., 2004). Nabhan and colleagues (2004) administered rituximab 375 mg/m2 weekly for 4 cycles, adding alemtuzumab thrice weekly during weeks 2–5 in 12 patients with relapsed CLL. One patient achieved a partial response (PR), while 90% patients had stable disease. Therapy was relatively well-tolerated, with no treatment-related deaths; how-ever, 75% of patients experienced grade 2 rigors and 33% exhibited grade 3/4 fevers. A second trial evaluating the combination of rituximab and alemtu-zumab used a similar schedule in 48 relapsed CLL and PLL patients. Response rates were strong, with 65% achieving a PR. However, infection was common, occurring in 56% of patients (Nabhan et al., 2004). Longer follow-up and additional studies will help to fully elucidate the role of combination therapy with alemtuzumab, further addressing the issue of additive myelosuppression and infectious risk with this agent. Selected clinical studies of alemtuzumab are summar-ized in Table 2.

The most common adverse effects associated with alemtuzumab consist of infusion-related reactions, infectious complications, and hematologic toxicities. Infusion reactions are quite widespread, seen in approximately 90% of patients receiving drug intrave-nously in a large trial by Keating et al. (2002a). Rigors, fever, nausea, vomiting, and rash are often seen with initial infusions; however, these typically decrease with subsequent drug exposure (Greenwood et al., 1994). Rarely, hypotension and dyspnea are encountered (Lui and O’Brien, 2004). Premedication with acetami-nophen and antihistamines is recommended to reduce this possibility. Subcutaneous administration of alem-tuzumab also significantly lessens the risk of infusion-related adverse reactions (Bowen et al., 1997; Montillo et al., 2006). Unfortunately, subcutaneous administra-tion is associated with transient local skin reactions in most patients (Lundin et al., 2002). Another substantial adverse effect commonly associated with alemtuzu-mab is infection; lymphocyte counts drop rapidly after treatment, resulting in a severe and prolonged lym-phopenia. This profound T-cell depletion leads to an increased risk of opportunistic infections, particularly cytomegalovirus reactivation. Additionally, Herpes simplex virus infection, Pneumocystic cariniipneumonia,candidiasis, and septicemia have all been reported (Keating et al., 2002a). These often manifest between 3 and 8 weeks from treatment, during the T-lymphocyte count nadir (Osterborg et al., 2006). Currently, prophy-laxis with antibacterial and antiviral medications is strongly recommended in order to prevent these complications. Myelosuppression, on the other hand, consisting of anemia, neutropenia, and thrombocyto-penia, is typically moderate and transient, with grade 4 neutropenia occurring in about 20% of cases but neutropenic fever less commonly (Keating et al., 2002a; Lui and O’Brien, 2004; Osterborg et al., 2006).

Alemtuzumab treatment should be administered according to a dose-escalation schedule. Prior to each dose, appropriate premedication, consisting of acet-aminophen and an antihistamine such as diphenhy-dramine, should be given to help prevent infusion reactions. Corticosteroids, such as hydrocortisone, may be used to treat severe infusion-related events. An initial dose of 3 mg should be given as a 2-hr IV infusion daily; once this dose is tolerated (infusion-related toxicities are £ grade 2), the dose should beincreased to 10 mg IV over 2 hr; once the 10 mg dose is tolerated (infusion-related toxicities are £ grade 2), the maintenance dose of 30 mg IV over 2 hr may be initiated. This dose should be given thrice weekly. Single doses of greater than 30 mg and weekly doses exceeding 90 mg are not recommended, due to the risk of severe pancytopenia (Berlex, 2005). Alemtuzumab has also been administered via the subcutaneous route (Lundin et al., 2002).

Alemtuzumab is commercially formulated in a single-use clear glass ampule containing 30 mg of alemtuzumab in 3 mL of solution. The ampule should be inspected for particulate matter prior to use. Aseptic technique should be employed to withdraw the appropriate amount of drug from the ampule into a syringe. Drug should be filtered with a sterile, low-protein binding, nonfiber releasing 5 mm filter prior to dilution. This should be further diluted with 100 ml of either sterile 0.9% sodium chloride for injection or 5% dextrose in water solution. The resultant solution should be protected from light, and should be stored under refrigeration (2 to 8LC). Stability of this product is 8 hr once diluted. Alemtuzumab should be infused through an intravenous line that does not contain any other drug substances (Berlex, 2005).