Gemtuzumab ozogamicin (GO) was one of the first commercially available bispecific monoclonal antibo-dies. This recombinant, humanized, IgG4 MAb to cell surface marker CD33 is covalently bonded by a bifunctional linker to the potent cytotoxic antibiotic, calicheamicin. Immature and mature myeloid cells, as well as erythroid, megakaryocytic, and multipotent progenitor cells express the 67-kDa glycosylated transmembrane protein CD33. In addi-tion, this protein is expressed on the surface of most leukemic blast cells found in acute myelogenous leukemia (AML) (greater than 90% of patients) as well as myelodysplastic syndromes (MDS) (Van der Velden et al., 2001; Cersosimo, 2003b). However, CD33 is not expressed on stem cells, nor is it expressed outside of the hematopoietic system, making it an excellent therapeutic target. The cytotoxic antibiotic calicheamicin is a natural antineoplastic compound derived from Micromonospora echinospora. It is made up of two molecules of the enediyne antitumor antibiotic n-acetyl-g-calicheamicin dimethyl hydra-zine (Sievers et al., 1999). This compound, along with its metabolites, has antineoplastic activity that is thousand times more potent than doxorubicin (Giles et al., 2003).

Clinical studies investigating the pharmacokinetic parameters of GO have been conducted in adults with AML in first relapse (Dowell et al., 2001; Korth-Bradley, 2001). Initial phase I pharmacokinetic trials found that a dose of 9 mg/m2 fully saturated CD33 sites in all patients regardless of disease burden. Phase II studies confirmed the efficacy of GO in refractory AML patients, and helped consolidate the treatment schedule of two 9 mg/m2 infusions sepa-rated by approximately 14 days. Measurements of serial plasma concentrations have confirmed a distinct difference in pharmacokinetic parameters between the first and second doses, largely thought to be due to a decline in circulating leukemic blast cells that express CD33. A study conducted by Dowell and colleagues in 59 adult patients with relapsed AML found that maximum plasma concentrations (Cmax) of both MAb and calicheamicin typically occurred shortly after the end of the 2 hr infusion; additionally, Cmaxvalues were generally higher after the seconddose (Dowell et al., 2001). Values for Vd changed as well, averaging approximately 20.9 L after the first dose and only 9.9 L after the second (Dowell et al., 2001). This decrease in Vd is likely also due to a decline in the number of circulating cells expressing CD33. In addition, the relatively low distribution volumes suggest that GO does not distribute beyond the plasma compartment, but rather remains bound to CD33 antigenic sites within the vascular space. This has been confirmed by radiolabeled studies, which demonstrates that organs with a large blood pool, such as the spleen and liver, are primarily responsible for uptake and distribution of the antibody(Scheinberg et al., 1991; Caron et al., 1994). Another pharmacokinetic evaluation of GO by Korth-Bradley and colleagues (2001) compared the kinetic para-meters of GO in different populations. Although a great deal of interpatient variability was observed, the authors concluded that there were no significant differences in Cmax, time to Cmax, AUC, clearance, or Vdbetween males and females, nor were there anysignificant differences between those over 60 and those under 60 years of age. Clearance of GO from the plasma occurs mainly through uptake by CD33-positive cells and subsequent internalization, and is therefore influenced by antigen concentration. Elimination half-life of the drug is fairly long, and increases upon second exposure. Median half-life of the antibody component is 72.4 hr after the first dose and 93.7 hr after the second, while the median half-life of the calicheamicin component is 45.1 hr after the first dose and 61.1 hr after the second (Cersosimo, 2003b). Accumulation between doses was not found to be significant, as evidenced by concentrations equivalent to 1% of Cmax measured just prior to the second dose (Dowell et al., 2001b).

Results of a phase I study evaluating dose range, pharmacokinetics, and safety of GO in adults with CD33-positive relapsed AML showed that two doses of 9 mg/m2 resulted in > 75% saturation of CD33 antigen on peripheral blood mononuclear cells (Nabhan and Tallman, 2002). Subsequently, a series of three phase II trials utilizing the 9 mg/m2 dose were conducted to evaluate the efficacy of the compound. Initially, 142 patients with untreated, relapsed AML were enrolled. The data were compiled and published in one report (Sievers et al., 2001). The FDA granted approval of GO based on this analysis, but stated that approval was contingent upon ongoing studies to further clarify the role of GO in recurrent AML (Bross et al., 2001; Cersosimo, 2003b). Three years later, a final report summarizing the results of these studies was published by Larson and collea-gues. This study corroborated the findings of the initial data summary (Larson et al., 2005). In total, 277 patients were evaluated. Seventy-one patients (26%) achieved CR, with 35 (13%) fully recovering platelets and 36 (13%) achieving CRp (CR without full platelet recovery > 100,000/L). Median relapse-free survival was 5.2 months for all patients (6.4 months for patients in CR); overall survival was 4.9 months (12.6 months for patients achieving remission). Toxicities consisting of fever, rigors, hypotension, and other infusion-related events were common (grade 3 or 4 infusion reactions occurred in 34% of patients after the first dose, but only 12% after the second dose). Other significant grades 3 and 4 adverseevents were similar to previous reports, and included thrombocytopenia (99%), neutropenia (97%), and infections (25%) (McGavin and Spencer, 2001; Cersosimo, 2003b). The most clinically significant adverse event noted by investigators was hepatotoxi-city, which typically manifested as hyperbilirubine-mia (29% grade 3 or 4) and liver enzyme elevations (18% and 9% for AST and ALT, respectively). These generally appeared within a few days of exposure and were reversible without medical intervention. However, 16 episodes of veno-occlusive disease of the liver (VOD) were reported from 299 administered courses (5%). Other phase II trials have shown similar results (Table 3). 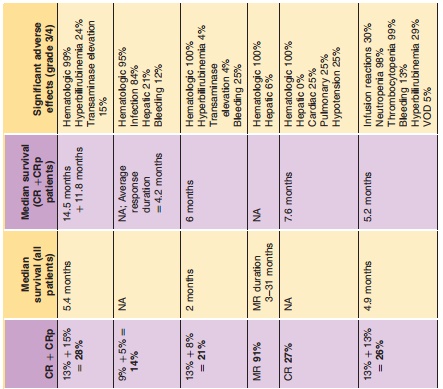 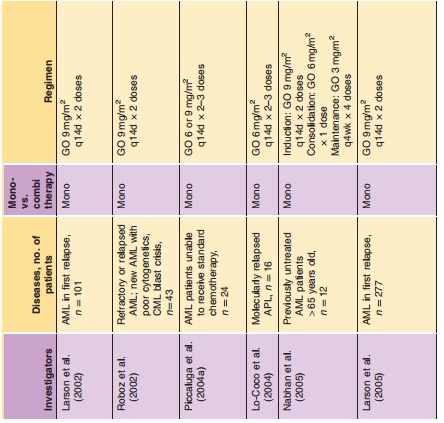 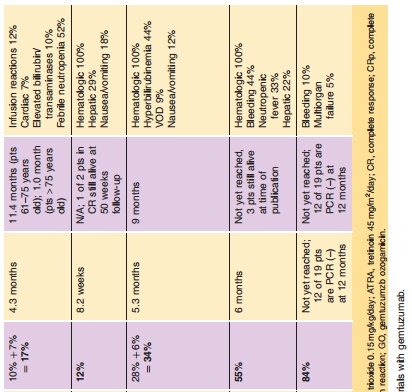 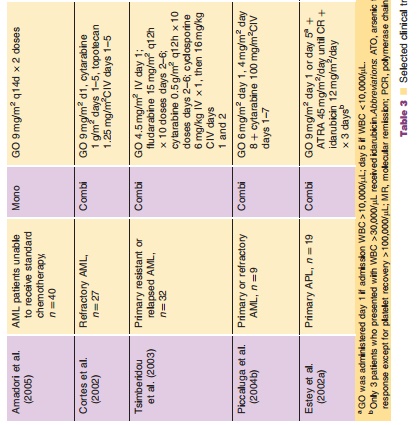 Significant activity has been demonstrated with the use of GO in the treatment of acute promyelocytic leukemia (APL) (Estey et al., 2002a; Lo-Coco et al., 2004). Cells isolated from APL patients frequently express CD33, and are therefore an effective target for GO (Tsimberidou et al., 2005). A study by Lo-Coco and colleagues (2004) evaluated GO as single-agent therapy in patients with advanced stages of APL, and found that after two doses were administered, 91% patients attained a molecular remission (MR); after three doses were administered, essentially 100% of 13 patients achieved MR. Only 1 patient (6%) developed clinically significant hepatotoxicity (grade 3), and this patient had received stem cell transplanta-tion and had chronic GvHD during therapy (Lo-Coco et al., 2004). Combination therapy for APL has also been studied; Estey and colleagues (2002a) adminis-tered GO with tretinoin in newly diagnosed APL patients, and found a response rate of 84%. Therapy was relatively well tolerated, and no patients devel-oped VOD. The authors concluded that GO appears to demonstrate activity in and be feasible for the treatment of APL.

GO is associated with a variety of adverse effects, the most common of which are infusion-related reactions, hepatotoxicity, and myelosuppression (Giles et al., 2003). Myelosuppression is profound and prolonged, occurring in 99–100% of patients; counts typically nadir at 7–14 days and recover within 28–35 days (Giles et al., 2003). In some cases, recovery may take even longer, and platelets may never return to normal values. Infusion-related events, including fever, rigors, hypotension, dyspnea, nausea, emesis, and headache are common as well; however, these are typically mild in severity, and risk decreases after initial exposure (Larson et al., 2005; Tsimberidou et al., 2005). Premedication with corticosteroids and diphenhydra-mine may reduce this complication. Hepatotoxicity associated with GO therapy is another recognized adverse effect. Hyperbilirubinemia and transaminase elevations are often mild and reversible without medication, occurring within 8 days of drug exposure and lasting approximately 20 days (Giles et al., 2003). However, a more concerning manifestation of hepato-toxicity is VOD. This seems to be more common when GO is used in combination with other chemotherapeu-tic agents, or after SCT (Giles et al., 2003). When GO is utilized in the approved single-agent manner, VOD incidence is approximately 1–5%. However, when GO is used in combination therapy, VOD risk increases to 5–12%. Age, gender, underlying disease, preexisting renal or hepatic function, alcoholism and hepatitis history do not predict which patients will develop VOD (Giles et al., 2003). It has been postulated that premedication with acetaminophen could increase the risk of VOD; interference with glutathione oxida-tion-reduction reactions by acetaminophen could leave sinusoidal endothelial cells susceptible to attack by calicheamicin-generated free radicals, thus increasing the risk of toxicity. Until the exact mechanism of VOD is elucidated, some clinicians advocate the avoidance of premedication with acetaminophen prior to GO treat-ment (Gordon, 2001; Cersosimo, 2003b). VOD remains a significant concern with GO therapy, and more data are needed to determine the risks and benefits of treatment with this agent.

GO is indicated for the treatment of CD33-positive AML in first relapse for patients ‡ 60 years of age who are not candidates for other chemotherapy. The recommended dose is 9 mg/m2 IV over 2 hr repeated after 14 days for a total of two doses (Wyeth, 2006).

GO is commercially formulated as a lyophilized powder for injection in 5 mg amber vials. The contents of each vial should be stored under refrigeration (2LC to 8LC) and protected from light. After reconstitution with 5 mL sterile water for injection, the appropriate amount of drug should be drawn up and further diluted with 100 mL of sterile 0.9% sodium chloride for injection. This product should be protected from light with the addition of a UV-protectant bag. Infusions should be administered over 2 hr through an intravenous line that is equipped with a low-protein-binding 1.2 mm terminal filter. This medication can be infused peripherally or centrally. Patients should also receive appropriate premedica-tion with diphenhydramine prior to receiving GO (Wyeth, 2006).