Menstruation is a visible manifestation of cyclic, physiologic uterine bleeding due to shedding of the endometrial wall following invisible interplay of hormones mainly through Hypothalamus-Pituitary-Ovarian axis.

Definition: Menstruation is a visible manifestation of cyclic, physiologic uterine bleeding due to shedding of the endometrial wall following invisible interplay of hormones mainly through Hypothalamus-Pituitary-Ovarian axis.

The hormones involved in the menstrual cycle

The mechanism is controlled by the hypothalamus.

Menstrual cycle can be explained in two cycles which occur concurrently

1. The ovarian cycle and

o    The follicular phase , ovulation and

o    The proliferative phase and

Follicular phase: The hypothalamus released gonadotrophin releasing hormone, which stimulate anterior pituitary gland and secrets follicle stimulating hormone (FSH). All the follicles degenerated except one to mature into a large graffian follicle. The follicle ruptures and releases an ovum into the peritoneal cavity.

Menstrual phase: Characterized by vaginal bleeding and lasts for 4-6 days. Physiologically this is the terminal phase of the menstrual cycle. The endometrium sheds up to the basal layer along with the blood from capillaries and the unfertilized ovum. Bleeding occurs when the coiled arteries return to a state of construction.

Proliferative phase: This phase follows menstruation and lasts until ovulation. The first few days the endometrium is reforming and it is termed as “Regenerative phase.”. Estrogen stimulates proliferation and growth of endometrium. Under the control of oestrogen re-growth and thickening of endometrium begins. Ovulation occurs between day 12 and day 16.

Secretary phase: Lasts about 12 days. This phase is initiated response to increase in luteinizing hormone. Progesterone prepares the endometrium for pregnancy. The functional layer thickens to 3.5 mm and become spongy in appearance. The endometrium is vascular and rich in glycogen, spiral or coiled arteries develop. On day 27 and 28 oestrogen and progesterone levels fall because the corpus luteum is no longer producing them. Without these hormones,he uterine lining becomes ischemic. The lining starts to slough, the women has come to full cycle and it is once again at day first of the menstrual cycle.

PMS is any unpleasant or uncomfortable symptom during menstrual cycle that may temporarily disturb normal functioning. These symptoms may last from a few hours to many days.

Premenstrual Dysphoric Disorder (PMDD) is a much more severe form of PMS which affects approximately 3%-8% of women of reproductive age. PMDD requires treatment by a physician. 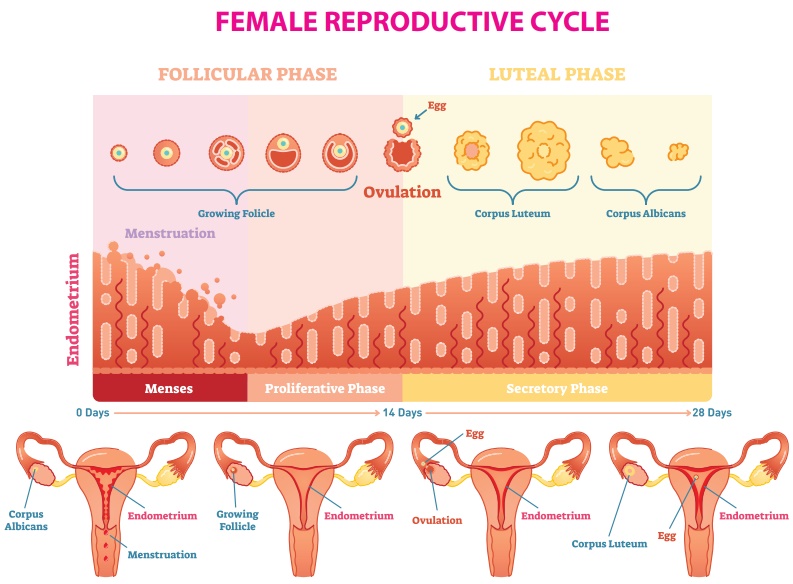 Amenorrhea: It is absence of menstruation.

not begin at puberty.

Dysmenorrhea: It is characterized by severe and frequent menstrual cramps and pain associated with menstruation.

Secondary Dysmenorrhea: Is caused by other medical conditions, most often endometriosis.

Menorrhagia: It is the medical term for excessive menstrual bleeding. In a normal menstrual cycle, women on average lose about 30 ml of blood for about 7 days of menstruation. If bleeding exceeds 7 days or too heavy (over 80 ml), then it is called as menorrhagia. The main cause of menorrhagia is an imbalance of estrogen and progesterone in the body.

Metrorrhagia: Refers to menstrual bleeding that is normal in amount but occurs of irregular intervals, between the menstrual periods hemorrhage from the uterus, independent of menstruation.

Menopause: It is the process through which a woman ceases to be fertile.