Lymphocytes (see Figure 9.10) are key constituents of the immune system. This white blood cell group rec-ognizes foreign agents and produces “ammunition” to destroy them. They not only recognize but also re-member the agents that they have encountered andreact more rapidly and with greater force if they are encountered again. If the other white blood cells are considered foot soldiers, lymphocytes can be com-pared with the Federal Bureau of Investigation (FBI), with their collection of criminal profiles. As there are specialists in the FBI, the lymphocytes, too, are also specialized into different subtypes (see Figure 9.11). These subtypes have specific functions; however, they integrate closely and defend the body together. 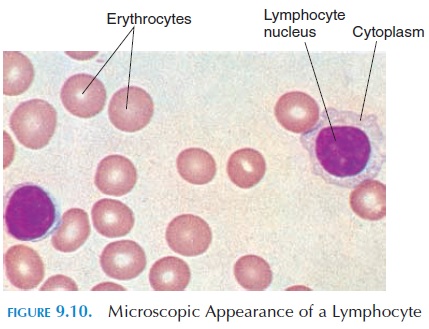 Formation and Processing of Lymphocytes

In the fetus, lymphocytes develop in the bone mar-row. Some lymphocytes migrate to the thymus and are transformed into those cells responsible for one immunity arm,cell-mediated immunity. The lym-phocytes that are processed in the Thymus, are calledT lymphocytes. Other lymphocytes, the B lympho-cytes, are responsible forhumoral immunity. Theselymphocytes, the bursa of Fabricius, are named for the organ in birds in which they were first discovered. In man, with no tissue equivalent to the bursa of Fabricius, such processing is thought to occur in the liver, bone marrow, or spleen. After processing, the T and B lymphocytes migrate to the lymph nodes and bone marrow. 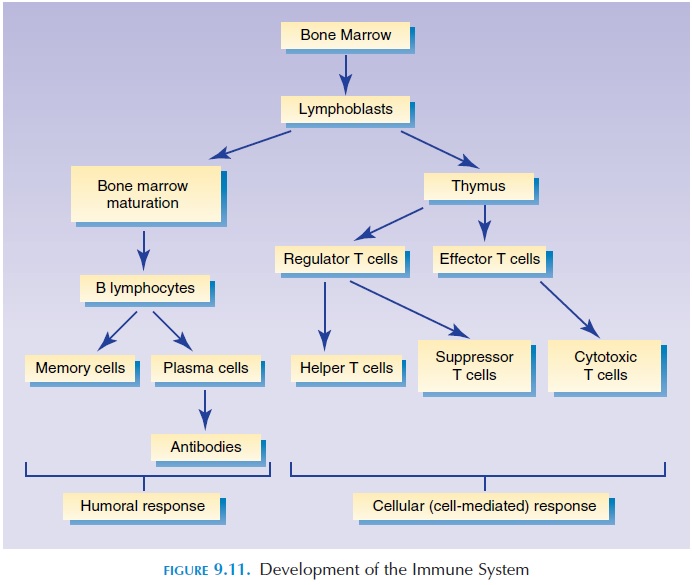 One way that lymphocytes participate in immune re-actions is by antibody production (see below) that re-acts to proteins that are foreign to the body. This type of immunity is called humoral immunity, or the an-tibody-mediated immune response. Humoral im-munity is primarily effective against antigens present in the body fluids.

Memory cells store data about a particular antigen for future use. Plasma cells produce specific anti-bodies (or immunoglobulins) against this protein.Immunoglobulins are glycoproteins that circulate in the blood. Each Y- or T-shaped molecule is composed 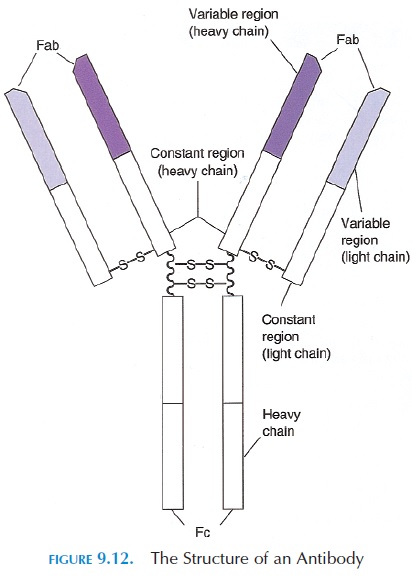 of four polypeptide chains (two heavy and two light chains), with a carbohydrate chain attached to each heavy chain. Each chain has a variable region that matches the specific antigen (see Figure 9.12) and a constant region. The structure of the constant re-gions of the antibody is common to all other anti-bodies of the same class.

There are five antibody classes; IgG, IgA, IgM, IgD, and IgE. The classes of antibodies differ from each other in their constant regions. This difference con-fers slightly different properties and biological roles to each class. An apt analogy for these five classes is to compare them to different types of weapons used to attack an enemy. Special weapons are used for ground-to-ground combat, others for surface-to-air combat, and others are used under water! For exam-ple, IgA is secreted in tears, saliva, and intestinal se-cretions and protects the body from invasion by spe-cific organisms. IgA antibodies are secreted in breast milk. Maternal IgG antibodies cross the placenta be-fore birth and provide resistance to the fetus. IgE an-tibody, if bound to specific antigens, prompts mast cells and basophils to release histamine.

How Do Antibodies Work?

Antibodies work in different ways. Some antibodies neutralize the antigens when they combine and pre-vent them from exerting their effects. Others may lysethe cell on which the antigen is present. In addition,when antibodies are bound to antigens on the surface of bacteria, they attract other white blood cells, such as macrophages and neutrophils, to engulf them. An-tibodies may also result in the release of histamine and other chemicals from cells. Also, some of these defense mechanisms are partly caused by stimulationof the complement system.

Recognition of Self and Nonself

Although each cell in the body has antigens (sub-stances capable of provoking antibody formation) on its cell membrane, lymphocytes are able to distin-guish “self” from “nonself.” In every individual, cer-tain genes code for the production of unique glyco-proteins. These glycoproteins are present on the surface of every cell in the body, identifying it as self. These glycoproteins, known as major histocompati-bility complex (MHC), can be compared to an iden-tification badge given to members of a particular as-sociation. Therefore, in general, antibodies are not developed against cells belonging to self. Even if it does, the body protects itself from attacks by its own defense cells in many ways. For example, T cells that develop against self are killed in the thymus early in life. Also, B cells that are exposed to high concentra-tions of antigens become less responsive. Since B cells are exposed to a high concentration of self antigens, they do not react against them. Rarely, cells of self are recognized as foreign by the body’s own lymphocytes. The resultant immunologic reaction is responsible for the signs and symptoms of autoimmune diseases.

Primary and Secondary Responses on Exposure to Antigens

The initial response of the body on the first exposure to antigens is known as the primary response. After exposure to the antigen, it normally takes about two weeks for antibody levels to peak. During this time, B cells are converted to plasma cells that secrete an-tibodies specific for the antigen. The antibody levels do not remain elevated for long after the first expo-sure. If the individual is exposed to the antigen a sec-ond time, the presence of memory cells stimulates rapid production of antibodies. In thesecondaryresponse, antibody levels quickly reach peak levels(see Figure 9.13). The levels are much higher than those of the primary response and remain elevated for a longer time. Secondary responses can occur even if many years have elapsed after the first expo-sure to the antigen. 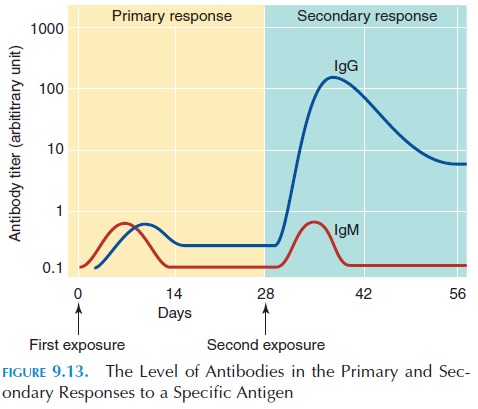 T cells are activated when exposed to an antigen on the surface of foreign agents or when cells such as macrophages present the foreign antigen on their cell membrane after ingesting the foreign agent. Similar to B cells, there are different subtypes of T cells, each with specific functions. The cytotoxic/effector/killer T cells attack and destroy cells thatcarry the antigens that initially activated them. One mechanisms they use for the attack is to punch holes in the cell membrane of the foreign cell. They may also provoke a reaction inside the foreign cell that re-sults in death.

Helper T cells also induce the macrophages and monocytes to fight in-fection. Another type of T cell, the suppressor T cell, suppresses the immune reaction by inhibiting both B and T cells. Memory T cells remember the antigenic properties and respond quickly and vigorously if the same antigen is reintroduced into the body.