ABNORMALITIES OF THE IMMUNE SYSTEM

Acquired immune deficiency syndrome (AIDS) de-velops after infection by the human immunodefi-ciency virus (HIV). There are three subtypes of thisvirus: HIV-1, HIV-2, and HIV-3. Because most indi- viduals infected with HIV-1 virus eventually develop AIDS (unlike those infected by the other subtypes), this subtype is considered the most significant.

HIV belongs to a class of viruses called retrovirus. Retroviruses carry their genetic information as RNA rather than DNA. The virus has a protein coat that surrounds the RNA strand and reverse transcriptase enzyme (the enzyme that helps RNA to be converted to DNA inside the host cell). A bilipid layer coat en-closes the virus. Proteins embedded in the coat help the virus enter the host cell (see Figure 9.14). The virus is fragile and does not live for long outside the body. Once inside the body, the virus targets helper T cells and macrophages. 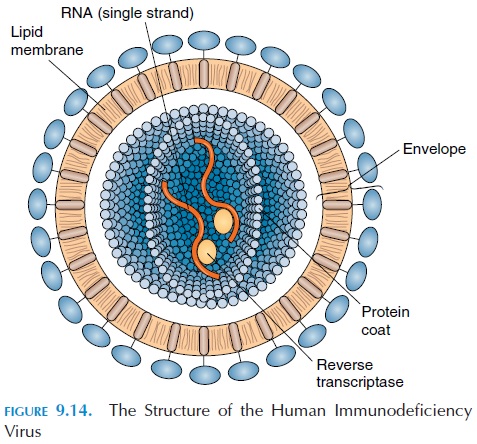 In certain cells, the infection enters a latent phase in which the cell serves as a reservoir from which the virus can be released for a period of many years. In other cells, the virus may behave differently. After it enters the cell, it sheds its protein coat and, with the help of reverse transcriptase, alters the genetic mate-rial within host cell nucleus. Soon, the cell begins to manufacture viral proteins, which then affect more and more cells. The infected cells are ultimately killed, reducing the number of helper T cells in the body. Because helper T cells coordinate both cell-me-diated and humoral immunity, the infected individ-ual becomes immunodeficient. Suppressor T cells are not affected, which helps to further depress the im-mune response. As a result, the body is vulnerable to many types of infections.

Microorganisms that ordinarily do not affect hu-mans (opportunistic infections) tend to infect the affected individual with lethal consequences. The surveillance activity of the immune system is also de-pressed and abnormal (cancerous) cells normally recognized and destroyed by the immune system sur-vive, increasing the risk of cancer.

Spread of the Virus

Other than contracting HIV through transmission of contaminated blood (this is rare as donors are now carefully screened for AIDS before taking blood), needle sharing by drug users increases the risk. In the United States, approximately 2,000 babies are born infected with HIV each year. This is a result of the transmission of the virus across the placenta from in-fected mothers. The virus is not transmitted by insect bites or by casual contact, such as hugging and shar-ing of household items.

Course of the Disease

Initially, a few weeks after exposure to HIV, the in-fected individual may experience flulike symptoms, with lymph node enlargement . At this time, antibod-ies against the virus begin to form. Available tests can detect the presence of these antibodies in the blood within 2 to 6 months of exposure. The course of the disease is variable and further symptoms may not ap-pear for 5 to10 years. However, the virus continues to multiply in the lymphoid tissue, depleting the T cells, and depressing the immunity. The Centers for Dis-ease Control and Prevention in Atlanta, Georgia, has classified HIV disease based on the T cell count. The symptoms do not usually appear until the number of specific T cells is low. Those individuals with very low counts are categorized as having late-stage HIV dis-ease and include all patients with AIDS.

Early symptoms of AIDS are initially mild, including lymph node enlargement, weight loss, and diarrhea. Soon, the person develops life-threatening infections. Infections as a result of unusual microorganisms are observed. As a result of immunologic surveillance de-pression, the risk of cancer is high. A normally rare cancer, known as Kaposi’s sarcoma, is common. Ka-posi’s sarcoma is characterized by purple/brown/blue growths that appear on the hands, feet, and trunk. The lesions are caused by abnormal multiplication of en-dothelial cells of blood vessels. In people with AIDS, the lesions tend to quickly spread to different areas of the body. Infection of the nervous system by HIV, even-tually produces dementia. The average life expectancy after diagnosis is 2 years.

The best defense is to avoid exposure to HIV. Sexual contact with infected individuals should be avoided because all forms of sexual contact increase the risk of viral transmission. Condoms are recommended when a partner’s sexual history is not known. The only condoms to be used are those made of materials, such as latex, that block the passage of the virus.

HIV is destroyed when exposed to heat (57.2°C [135°F] for 10 minutes) or disinfectants, such as hy-drogen peroxide, household bleach, and even stan-dard dishwashing and clothes washing liquids.

Unfortunately, there is no cure for AIDS. Rapid progress is being made in developing a vaccine that may provide HIV immunity. The survival rate of AIDS patients is increasing as a result of the develop-ment of drugs that slow the progress of the disease and improved antibiotic therapies against secondary infections. During treatment, the psychosocial issues involved with the disease are important.

One treatment option for cancer patients is to give drugs that target the rapidly multiplying cells. These drugs, in addition to attacking cancer cells, destroy mother cells that manufacture lymphocytes and, thus, reduce immunity. Radiation therapy, another cancer treatment option, also has similar serious ad-verse effects.

The immune system in individuals who have received transplants (e.g., skin, kidney, bone marrow) is delib-erately suppressed by drugs to prevent immune cells from attacking the foreign tissue. These drugs make these individuals more prone to infection.

Autoimmune disorders result when the immune sys-tem mistakenly targets normal body cells and tissues. Normally, self-proteins that have antigenic properties are ignored. Even if the antigens are targeted by some defense cells, they are quickly destroyed by nat-ural killer cells.

It is important for massage therapists and other health professionals to obtain a detailed history of al-lergy to avoid serious consequences in the clinic.

Allergies are considered an inappropriate, exces-sive, or abnormal response to antigens. The antigens in allergic reactions are often referred to as aller-gens. Allergens may be inhaled, ingested, injected, orintroduced by direct skin contact. In an allergic reac-tion, the inflammatory response produced by anti-gen-antibody complexes may be extensive, and some normal cells in the region may also be destroyed along with infected or injured cells. The sensitization of a specific individual to an allergen is dependent on the individual’s genetic makeup, the physical and chemical properties of the allergen, how the person is exposed, and the quantity of the allergen.

According to the type of reaction and the immune mechanisms involved, allergies are classified into four categories:

In immediate hypersensitivity or type I allergy, anti-bodies begin to develop against the allergen when a person is first exposed to it. Because the primary re-sponse to the antigen is slow, the reaction may be mild. The antibodies (IgE type) developed in this en-counter get bound to the cell membrane of basophils and mast cells throughout the body. The change that occurs after the first exposure to the allergen is known as sensitization. The tendency of certain in-dividuals to produce large quantities of these anti-bodies may be a result of their genetic makeup, which is why certain allergies are common in family members.

After sensitization, if the individual is exposed to the allergen again, the bound antibodies trigger the ba-sophils and mast cells to liberate their secretions, such as prostaglandins, heparin, and histamine, into the sur-rounding tissue. These secretions are responsible for the dramatic symptoms observed in allergic individu-als such as vasodilatation, increased vascular perme-ability, bronchi constriction, pain receptors stimula- tion, and itching. Increased secretion, observed as wa-tery eyes, nasal discharge (rhinitis), and sneezing, also occurs. The basophils, macrophages, and other white cells attracted to the area are, in turn, stimulated to lib-erate their own chemicals, which further extends and multiplies the initial effects.

The extent of the response varies from individual to individual and from one location to another. If the individual’s skin is exposed to the allergen, the reac-tion may be restricted to the local area. Type I hy-persensitivity that is localized, such as hay fever or allergic rhinitis, dermatitis, or eczema; food aller-gies; or gastroenteritis are referred to as atopic dis-orders. Atopic disorders are a type of genetically de-termined hypersensitivity, and individuals with this type of allergy are usually allergic to more than one environmental allergen. Typical allergens causing al-lergic rhinitis and allergic asthma are pollen from grasses, weeds, and trees. Dust mites, animal dander, feathers, and fungal spores. Allergens that cause con-tact dermatitis in previously sensitized individuals include cosmetics, hair dyes, metals, drugs/creams applied to the skin, and latex (e.g., latex gloves). Al-most any food can produce allergies. Shellfish, legumes, cow’s milk and egg whites are common food allergens.

Symptoms develop dramatically when the allergen has entered the circulation, leading sometimes to death. This kind of a dramatic reaction is known as anaphylaxis.Deaths that result from transfusion ofincompatible blood and penicillin injections are ana-phylactic reactions. Here, the allergen enters the cir-culation and is quickly carried to mast cells through-out the body. The vasodilatation that results and the movement of fluid out of the dilated capillaries can lead to a sudden drop in blood pressure and anaphy-lactic shock. Welts or hives may develop on the skinsurface. The constriction of bronchi that accompa-nies anaphylaxis can lead to breathing difficulties. If this condition is not treated immediately, the individ-ual may collapse within minutes and die.

Examples of cytotoxic reactions or type II allergy are reactions produced in the fetus as a result of Rh in-compatibility and certain drug reactions. The reac-tion results in cell lysis, leading to reduction in red blood cells (anemia), white blood cells, and platelets.

In immune complex disorders or type III allergy, anti-gen-antibody complexes are deposited in the blood vessel walls or in the kidneys. The complexes activate complement proteins and result in local inflamma-tory reactions. Examples of type III allergic reactions are glomerulonephritis and the vasculitis (inflamma-tion in blood vessels) that occurs in systemic lupus erythematosus.

Delayed hypersensitivity or type IV allergies result in delayed reactions and are mediated by cells, not antibodies. T cells that have been exposed to an anti-gen are stimulated by a second exposure. The T cells attach to the antigen and usually produce a local-ized inflammation 24 to 72 hours after exposure. A typical example of type IV allergic reactions is the reaction that occurs around transplanted tissue and the reaction to skin tests, such as tuberculin tests, performed in individuals suspected of having tuber-culosis.

Certain allergy symptoms can be treated with anti-histamines. Other forms of treatment include admin-istration of corticosteroids to reduce inflammation; epinephrine or adrenaline to increase blood pressure and dilate the bronchi, and use of supportive equip-ment to monitor and regulate the vital signs.