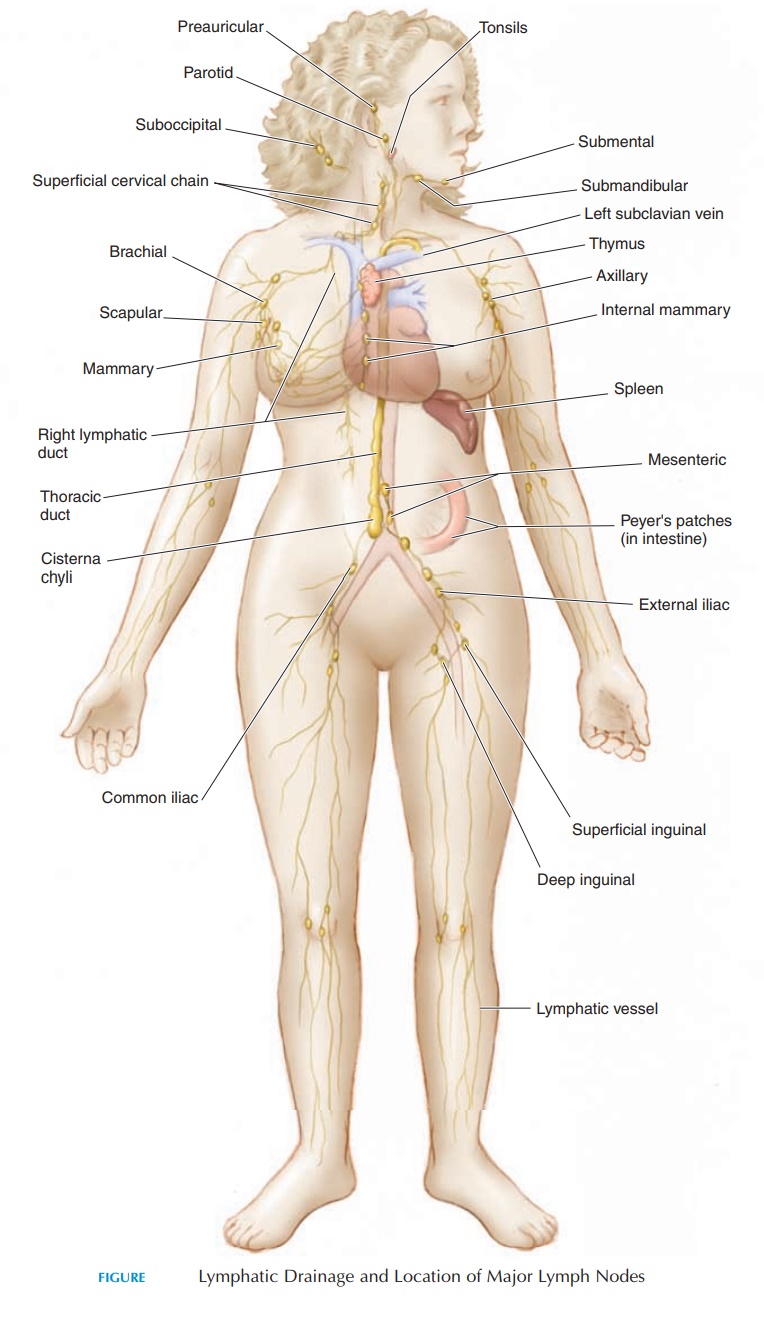 Knowledge of the direction and route of lymph drainage (Figure 9.3) is important for many reasons.

Knowledge of the direction and route of lymph drainage (Figure 9.3) is important for many reasons. Massage therapists can apply the massage strokes along the direction of lymph drainage and speed lymph movement. Surgeons can plan the extent of surgery or radiation in persons with cancer because cancer cells can be carried by lymph to the nodes draining the area. When treating some types of can-cer, the lymph nodes draining the area are removed or irradiated together with the cancerous tissue.

Lymphatic vessels in the arm (see Figure 9.7) consist of superficial and deep groups, which anastomose. The superficial vessels are present in the subcuta-neous tissue, while the deep vessels drain the muscle, periosteum, and bone. 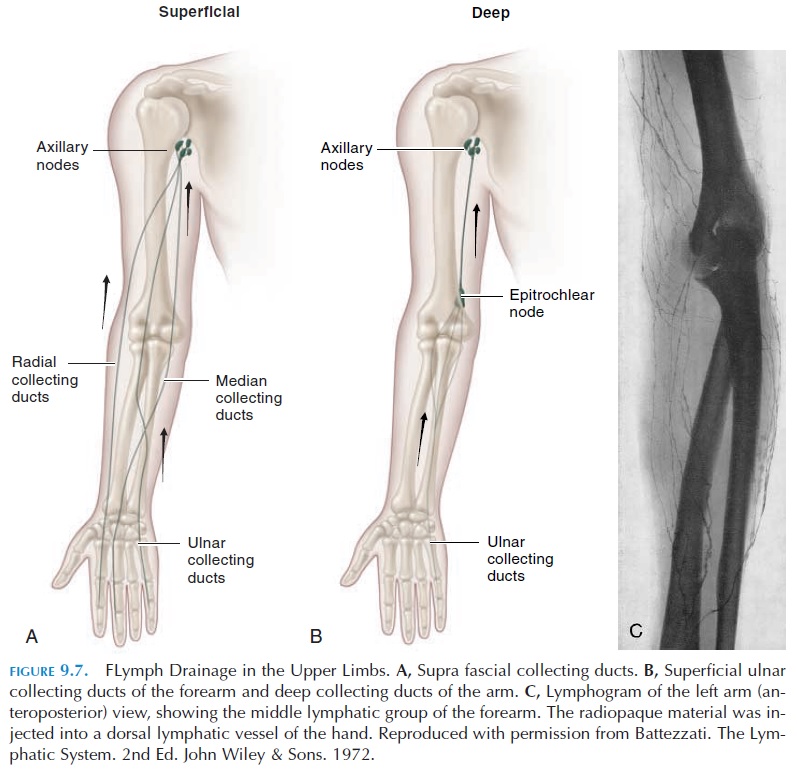 Each finger has one to two collecting ducts that join in the dorsum of the hand to form five or six larger trunks, joined with collect-ing ducts from the palm. In the forearm, three groups of drainage vessels are present—the ulnar group, the radial group, and the median group. The deep group of vessels travels along the deep arteries.

In the arm, the lymph from the ulnar and deep groups of vessels are screened by nodes located in front of the elbow (epitrochlear nodes) and then by nodes in the axilla (axillary nodes). The radial and middle groups join to ultimately drain into the axillary nodes.

From the axillary node on the left extremity, lymph flows to the neck region where it joins the thoracic duct. Lymph from the right extremity flows in the same direction as the left, except that it drains into the smaller, right lymphatic duct. Both ducts empty into the junction of the subclavian and internal jugu-lar veins (Figure 9.3).

The lymph from the right side of the chest, face, and scalp also flows toward the right axilla and into the right lymphatic duct. The lymph from the left side of face and scalp flows into the thoracic duct. Both sides are screened by numerous lymph nodes located in the neck (cervical nodes). Lymph from the nose, lips, and teeth drains through the submental and submaxillary nodes located in the floor of themouth before it reaches the cervical nodes. Preau-ricular lymph nodes, located in front of the ear,drain the superficial tissue and skin on the lateral side of the head and face (Figure 9.3).

There are two groups of collecting ducts in the leg, the superficial group and the deep group (see Figure 9.8). The superficial vessels arise in the subcutaneous tissue, and the deep arise from the muscles, perios-teum, and bone. The two systems are connected by anastomotic channels supplied with valves that allow lymph to flow from deep to superficial. There are also collateral connections between the different groups. 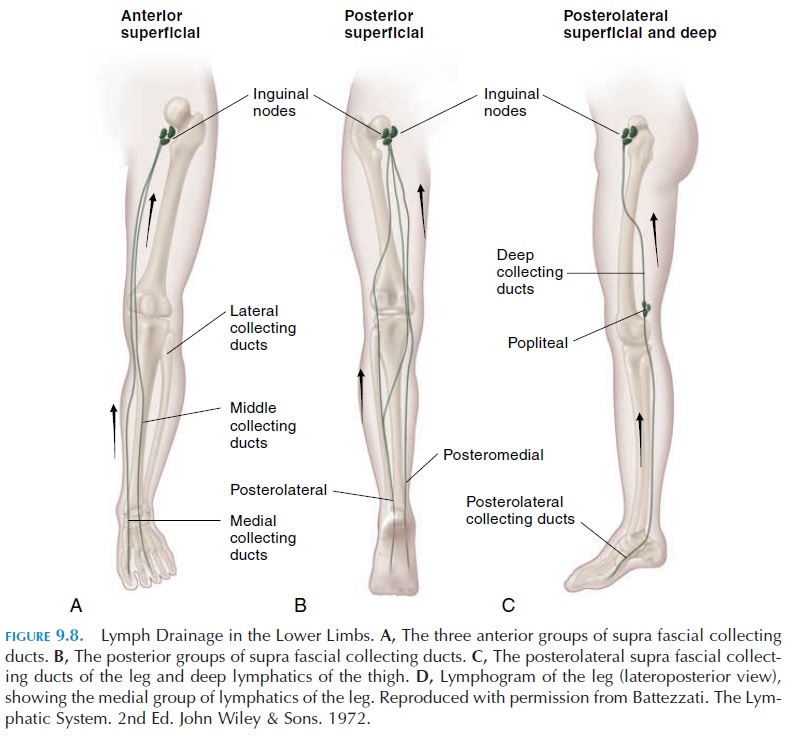 In the superficial group, one to two collecting ducts arise from each toe and join on the dorsum of the foot, forming five to six larger trunks on the ante-rior aspect. These are joined by certain vessels arising in the plantar surface. In the anterior aspect of the leg, there are three major superficial groups of ves-sels: the medial, lateral, and median groups. The three groups converge on the medial aspect of the knee to course with the great saphenous vein and reach nodes in the inguinal region.

On the posterior aspect, two groups of collecting ducts, the retromalleolar (medial and lateral), are formed. These vessels drain lymph from the plantar surface and heel of the foot. They run upward and me-dially to join the collecting ducts in the thigh. Some of the lateral vessels join the deep vessels and follow the small saphenous vein to reach the popliteal nodes, located in the posterior aspect of the knee.

All superficial groups of vessels ultimately join in the lower third of the medial aspect of the thigh to travel with the great saphenous vein and drain into nodes located in the upper part of the thigh, the in-guinal nodes (Figures 9.3 and 9.4B). 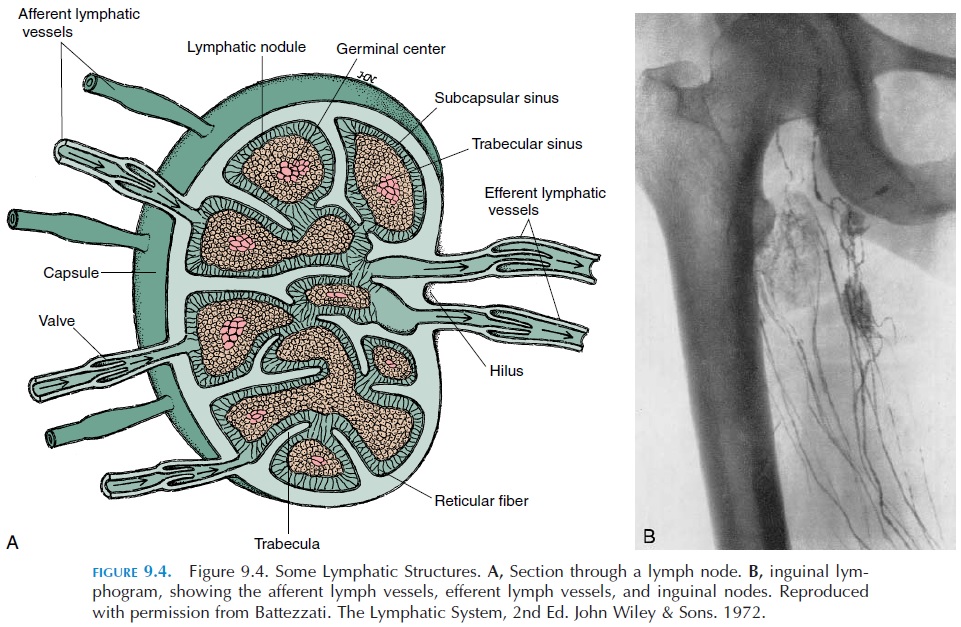 The deep vessels follow the deep vessels on the leg, to reach the popliteal nodes and eventually drain into the inguinal nodes. From here, the vessels carry the lymph into the abdomen and empty into the lower end of the thoracic duct.

The lymph drainage from the breast is important in cases of breast cancer. Eighty-five percent of the lymph flows into the respective axillary nodes. The remaining lymph drains into nodes located posterior to the sternum and lymph vessels located in the pec-toralis muscle. Certain vessels drain into nodes situ-ated in the supraclavicular region (Figure 9.3). 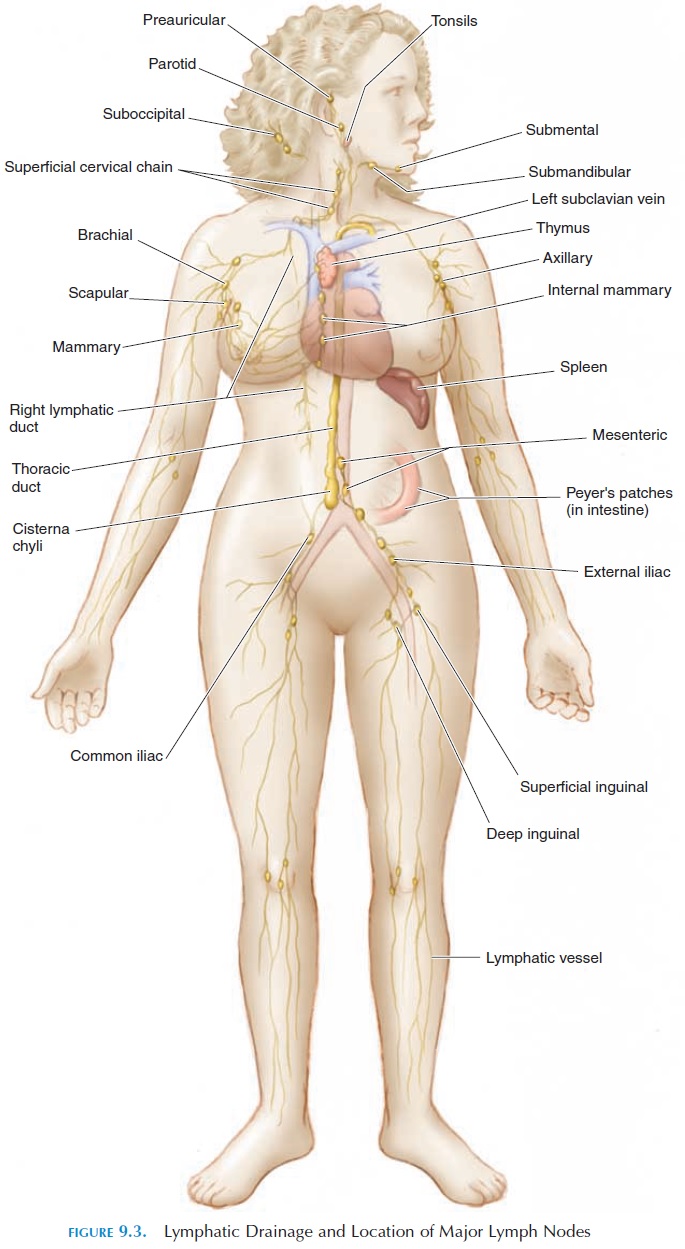