Did you know that an adult body contains approximately 40 liters (84.5 pt) of water?

Did you know that an adult body contains approxi-mately 40 liters (84.5 pt) of water? Visualize the vol-ume of 40 1-liter milk containers in the dairy section of your grocery store. About 25 liters (52.8 pt) of this fluid is found inside the cells—intracellular fluid (see Figure 9.1). The remaining 15 liters (31.7 pt) is found outside the cells—extracellular fluid. 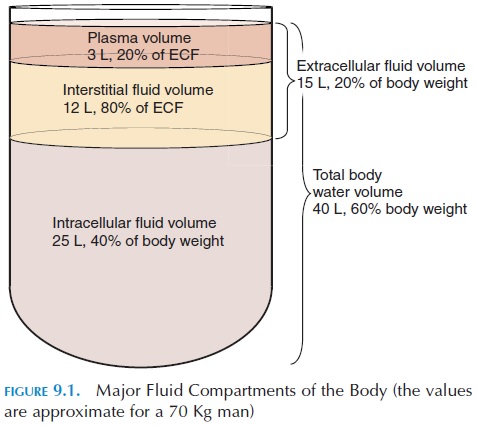 Of the extracellular fluid, about 12 liters (25.4 pt) are lo-cated between the cells (interstitial fluid) and 3 liters (6.3 pt) are located inside blood vessels as plasma or intravascular fluid (remember that theblood volume of about 5 liters (10.6 pt) is made up of this fluid, together with the blood cells).

Despite the rapid mixing of extracellular fluid, the volume of fluid in the plasma and the interstitial re-gion remains constant. The various physical forces that cause movement through the pores in the capil-laries maintain this constancy.

PHYSICAL FORCES THAT CAUSE MOVEMENTOF FLUID BETWEEN COMPARTMENTS

The plasma protein inside the capillaries is an-other force that plays a part in fluid movement. These proteins, similar to the interstitial fluid protein, draw fluid into the compartment in which they are located; in this case, the plasma. This force is called plasmacolloid osmotic pressure and is equal to 28 mm Hg.In conditions such as severe malnutrition in which plasma protein is decreased, less fluid is drawn into the blood vessels and more moves into the interstitial compartment, producing swelling. This swelling, caused by fluid accumulation in the interstitial com-partment, is known as edema. The movement of fluid out of the capillaries also depends on the per-meability of capillaries.

Normally, the excess fluid and protein that accumu-lates in the interstitial fluid compartment is removed by the lymphatic system. The activity of the lymphatic system determines the volume of fluid present. Edema results if lymph drainage from a region is reduced.

Therefore, there are various forces acting in differ-ent directions simultaneously, and the direction in which the fluid moves into or out of the capillaries depends on which net force predominates.

When the net force pushing fluid out of the capillar-ies predominates, fluid tends to accumulate in the in-terstitial fluid compartment. This increase of fluid in the interstitial fluid compartment is known as edema. Edema caused by low output of the lymphatic sys-tem, with resultant high levels of protein in the inter-stitial fluid is calledlymphedema. The physiologic factors that result in edema are listed in Table 9.1. Try to think of conditions that may present with edema as a result of one or more of these physiologic causes. 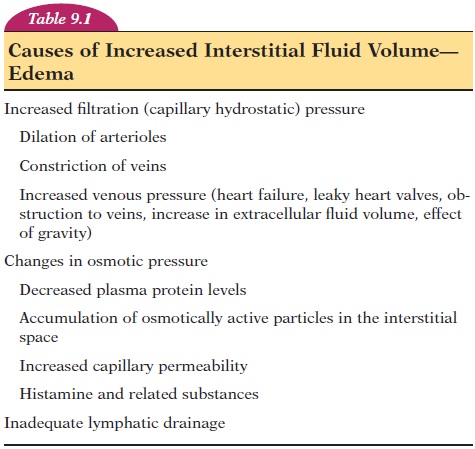