Biasing is the application of dc voltages to establish a fixed level of current and voltage. 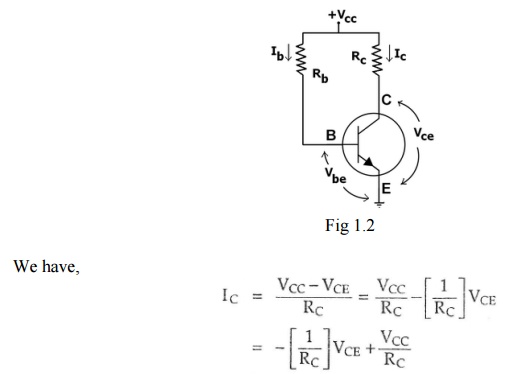 We can draw a straight line on the graph of IC versus VCE which is having slope -1/Rc.To determine the two points on the line we assume VCE = VCC and VCE =0

Saturation point - The point at which the load line intersects the characteristic curve near thecollector current axis is referred to as the saturation point . At this point of time, the current through the transistor is maximum and the voltage across collector is minimum for a given value of load. So, saturation current for the fixed bias circuit, Ic (sat) =Vcc/Rc .

Cutoff point -The point where the load line intersects the cutoff region of the collector curvesis referred as the cutoff point (i.e. end of load line). At this point, collector current is approximately zero and emitter is grounded for fixed bias circuit. so, Vce (cut) = Vc = VccOperating point - The "Q point" for a transistor amplifier circuit is the point along itsoperating region in a "quiescent ", where no input signal gets amplified. 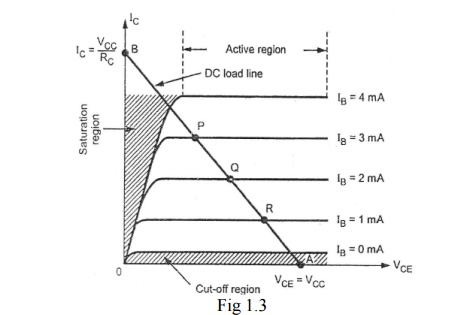 The d.c load line is a plot of IC versus VCE. For a given value of Rc and a given value of Vcc. So, it represents all collector current levels and corresponding collector emitter voltages that can exist in the circuit. Knowing any one of Ic, IB, or VCE , it is easy to determine the other two from the load line. The slope of the d.c load line depends on the value of RC. It is the negative and equal to reciprocal of the RC.

Applying KVL to the base circuit, we get

The operating point can be selected at different positions on the d.c load line, near saturation region, near cut-off region or at the centre, i.e in the active region. The selection of operating point will depend on its application. When transistor is used as an amplifier, the Q point should be selected at the center of the d.c. load line to prevent any possible distortion in the amplified output signal.

Biasing circuit is designed to fix a Q point at point P which is very near to the saturation region. It results collector current is clipped at the positive half cycle. i.e. distortion is present at the output. Therefore, point P is not a suitable operating point. 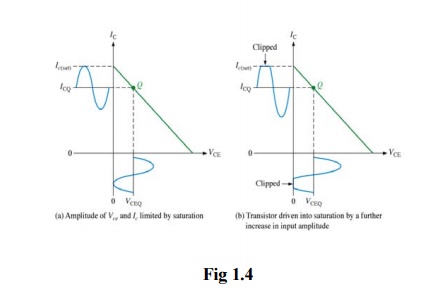 Biasing circuit is designed to fix a Q point at point R as shown in Fig. Point R is very near to the cut-off region. Here, the collector current is clipped at the negative half cycle. So, point R is also not a suitable operating point. 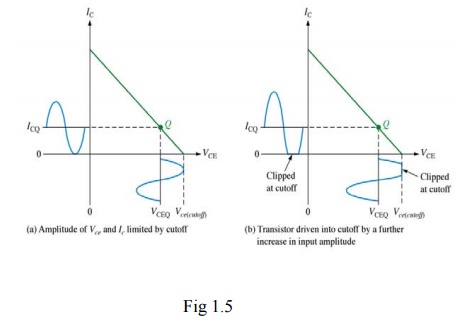 Biasing circuit is designed to fix a Q point at point Q as shown in Fig.. The output signal is sinusoidal waveform without any distortion. Thus point Q is the best operating point. 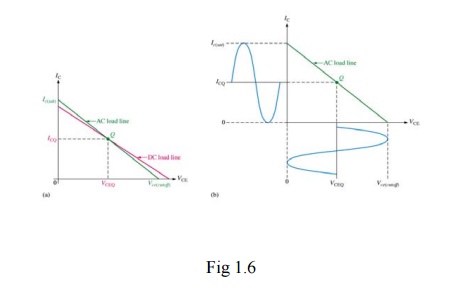 The figure 1.7 shows the biasing of transistor in common emitter configuration.

In Figure 1.8, we assign three values to IB and observe what happens to IC and VCE. First, VBB is adjusted to produce an IB of 200 A, as shown in Figure 1.8(a), Since IC = βDC IB, the collector current is 20 mA, as indicated, and

The Q-point for this condition is indicated by Q2 on the graph. 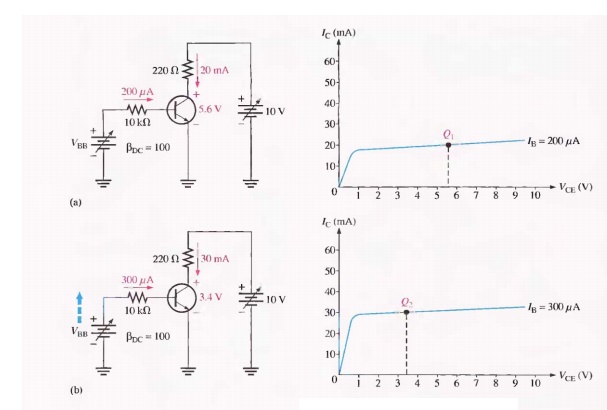 Notice that when IB increases, Ic increases and VCE decreases. When IB decreases, Ic decreases and VCE increases. As VBB is adjusted up or down, the dc operating point of the transistor moves along a sloping straight line, called the DC load line, connecting each separate Q-point. 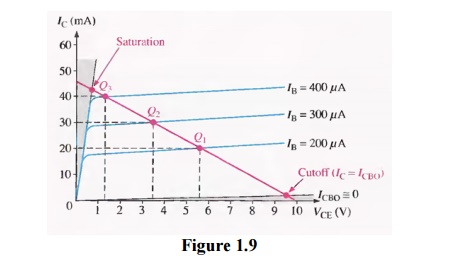 At any point along the line, values of IB, Ic, and VCE can be picked off the graph, as shown in Figure1.9.

The dc load line intersects the VCE axis at 10 V. The point where VCE = VCC. This is the transistor cutoff point because IB and IC are zero (ideally). Actually, there is a small leakage current, ICBO , at cutoff as indicated, and therefore VCE is slightly less than 10 V but normally this can be neglected.

The dc load line intersects the IC axis at 45.5 mA ideally. This is the transistor saturation point because IC is maximum at the point where VCE = 0 V and IC = VCC / RC.

Actually, there is a small voltage (VCE (sat)) across the transistor, and I C(sat) is slightly less than 45.5 mA, as indicated in Figure 1.4. Note that Kirchhoff's voltage law applied around the collector loop gives,

These results in a straight line equation for the load line of the form y = mx + b as follow:

Variation of quiescent point due to hFE variation within manufacturers tolerance

Two important factors are to be considered while designing the biasing circuits which are responsible for, shifting the operating point.

Specifically, ICB0 doubles for every 10°C rise in temperature. Increase in ICE0 in turn increases the collector current

Therefore, to avoid thermal instability, the biasing circuit should be designed to provide a degree of temperature stability i.e. even though there are temperature changes, the changes in the transistor parameters (VCE , I CQ , PDmax )should be very less so that the operating point shifting is minimum in the middle of the active region.

Eventhough there is tremendous advancement in semiconductor technology, there are changes in the transistor parameters among different units of the same type, same number. This means if we take two transistor units of same fire (i.e. same number, construction, parameter specified etc.) and use them in the circuit, there is change in the β value in actual practice. The biasing circuit is designed according to the required β value. But due to change in β from unit to unit, the operating point may shift

So for stabilizing the operating point the factors discussed so far should be considered while designing the biasing circuit. 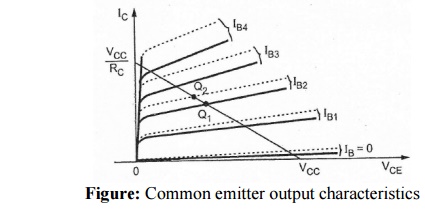