Lightning is produced by discharge of electricity from cloud to cloud or from cloud to ground. During thunderstorm air is moving upward rapidly. This air which moves rapidly, carries small ice crystals upward.

Rub your foot on a carpet floor and touch a door knob. What do you feel? Do you feel the shock in your hand? Why does this happen? 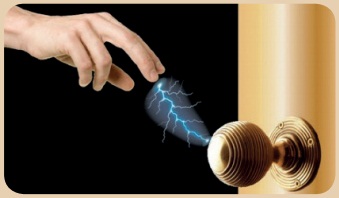 Answer: Getting a shock from a doorknob after rubbing your foot on a carpet floor, results from discharge. Discharge occurs when electrons onthe hand are quickly pulled to the positively charged doorknob. This movement of electrons,which is felt as a shock, causes the body to lose negative charge.

Getting a shock from a door knob after rubbing your foot on a carpet floor, results from discharge. Discharge occurs when electrons on the hand are quickly pulled to the positively charged doorknob. This movement of electrons, which is felt as a shock, causes the body to lose negative charge. Electric discharge takes place in a medium, mostly gases. Lightning is another example of discharge that takes place in clouds.

Sometimes the lower part of the cloud which is negatively charged comes into contact with the positive charges accumulated near the mountains, trees and even people on the earth. This discharge produces lot of heat and sparks that results in what we see as lightning. Huge quantities of electricity are discharged in lightning flashes and temperatures of over 30,000°C or more can be reached. This extreme heating causes the air to expand explosively fast and then they contract. This expansion and contraction create a shock wave that turns into a booming sound wave, known as thunder.

Lightning's extreme heat will vaporize the water inside a tree, creating steam that may burn out the tree.

Sometimes lightning may be seen before the thunder is heard. This is because the distance between the clouds and the surface is very long and the speed of light is more than the speed of sound. 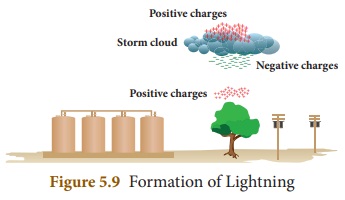 During lightning and thunder, we should avoid standing in ground or open spaces. You should make yourself as small as possible bysquating. It is however safe to stay inside a car because the car acts as a shield and protects us from the electric field generated by the storm.

A safety measure devised to prevent people from getting shocked if the insulation inside electrical devices fails is called earthing. Electrical earthing can be defined as the process of transferring the discharge of electrical energy directly to the earth with the help of ­low-resistance wire.

We get electrical energy from different sources. Battery is one such source. We use it in wall clocks, cell phones etc. For the working of refrigerators, air conditioners, washing machines, televisions, laptops and water heaters we use domestic power supply. Usually an electric appliance such as a heater, an iron box, etc. are fitted with three wires namely live, neutral and earth. The earth wire is connected to the metallic body of the appliance. This is done to avoid accidental shock.

Suppose due to some defect, the insulation of the live wire inside an electric iron is burnt then the live wire may touch the metallic body of the iron. If the earth wire is properly connected to the metallic body, current will pass into the earth through earth wire and it will protect us from electric shock. The earth, being a good conductor of electricity, acts as a convenient path for the flow of electric current that leaks out from the insulation.

Lightning arrestor is a device used to protect buildings from the effects of lightning. Lightning conductor consists of a metallic lightning rod (in the form of spikes) that remains in air at the top of the building. Major portion of the metal rod and copper cable are installed in the walls during its construction. The other end of the rod is placed deep into the soil. When lightning falls, it is attracted by the metallic rods at the top of the building. The rod provides easy route for the transfer of electric charge to the ground. In the absence of lightning arrestors, lightning will fall on the building and the building will be damaged. 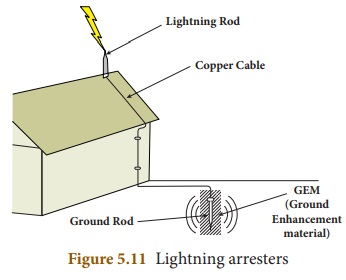