An atom consists of proton, electron and neutron which are called sub-atomic particles.

An atom consists of proton, electron and neutron which are called sub-atomic particles. Proton and neutron are found inside the nucleus which is at the centre of an atom. Electrons revolve around the nucleus in different paths called orbits. In an atom, the number of protons and the number of electrons will be equal. There is a force of attraction between the protons in the nucleus and the electrons in the orbits. Electrons in the inner orbits are strongly attracted by the protons and they cannot be removed from the atom easily. But, the electrons in the outermost orbits are loosely bound and they can be easily removed from the atom. 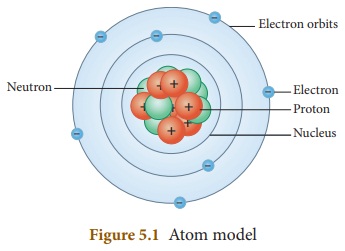