When current is flowing through a conductor it produces certain effects. These are known as effects of electric current.

When current is flowing through a conductor it produces certain effects. These are known as effects of electric current. These effects result in conversion of electrical energy into different forms of energies such as heat energy, mechanical energy, magnetic energy, chemical energy and so on.

Take two pieces of wire, an LED light and a battery, and make a simple electric circuit. Take some water in a glass and put the wires in the water as shown in the figure. Does the LED bulb glow? What do you understand from this? 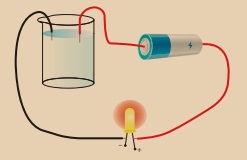 Answer: Yes, the LED bulb glows. From this activity we understood that liquids also conduct electricity.

We know that electricity is conducted by metals. This activity shows that liquids also conduct electricity. When electric current is passed through a conducing solution, some chemical reactions take place in the solution. This chemical reactions produce electrons which conduct electricity. This is called chemical effect of electric current. The decomposition of molecules of a solution into positive and negative ions on passing an electric current through it, is called electrolysis. Electrolysis has a number of applications. It is used in extraction and purification of metals. The most general use of electrolyte is electroplating. 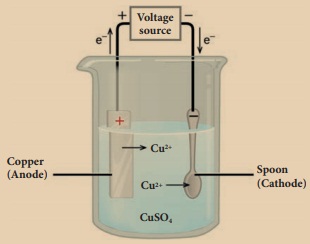 Electro plating is applied in many fields. We use iron in bridges and automobiles to provide strength. However, iron tends to corrode and rust. So, a coating of zinc is deposited on iron to protect it from corrosion and formation of rust. Chromium has a shiny appearance. It does not corrode. It resists scratches. But, chromium is expensive and it may not be economical to make the whole object out of chromium. So, the objects such as car parts, bath taps, kitchen gas burners, bicycle handlebars, wheel rims are made from a cheaper metal and only a coating of chromium is deposited over it.

Take a battery, a bulb, a switch and few connecting wires. Make an electric circuit as shown in the figure. Keep the switch in the ‘OFF’ position.

Does the bulb glow?

Answer: No, the bulb does not glow.

Now move the electric switch to the ‘ON’ position and let the bulb glow for a minute or so. Touch the bulb now. Do you feel the heat?

Answer: Yes, the bulb is hot because electrical energy is transformed to heat energy. This is known as heating effect of electric current.

When electric current passes through a conductor, there is a considerable ‘friction’ between the moving electrons and the molecules of the conductor. During this process, electrical energy is transformed to heat energy. This is known as heating effect of electric current. The heat produced depends on the amount of resistance offered by the wire.

Copper wire offers very little resistance and does not get heated up quickly. On the other hand, thin wires of tungsten or nichrome which are used in bulbs offer high resistance and gets heated up quickly. This is the reason why tungsten wire is used in the filaments of the bulbs and nichrome wire is used as a heating element in household heating appliances. Heating effect of electric current can be seen in many devices. Some of them are given below.

Fuse is a strip of alloy wire which is made up of lead and tin with a very low melting point. This can be connected to the circuit. The fuse is usually designed to take specific amount of current. When current passing through the wire exceeds the maximum limit, it gets heated up. Due to low melting point it melts quickly disconnecting the circuit. This prevents damage to the appliances.

Electric cookers turn red hot when electric current is passed through the coil. The heat energy produced is absorbed by the cooking pot through conduction.

The heating element is placed at the bottom of the kettle which contains water. The heat is then absorbed by the liquid and distributed throughout the liquid by convection.

When current flows through the heating element, the heat energy developed is conducted to the heavy metal base, raising its temperature.This energy is then used to press clothes.