An electroscope is a scientific instrument used to detect the presence of electric charge on body. In the year 1600, British physician William Gilbert invented the first electroscope.

The first electroscope developed in 1600 by William Gilbert was called versorium. The versorium was simply a metal needle allowed to pivot freely on a pedestal. The metal would be attracted to charged bodies brought near. 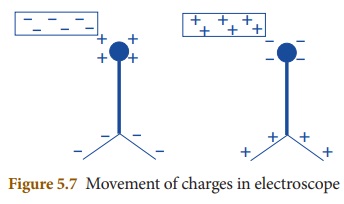 The gold-leaf electroscope was developed in 1787 by a British scientist named Abraham Bennet. Gold and silver are used in electroscope because they are the best conductors of electric current. 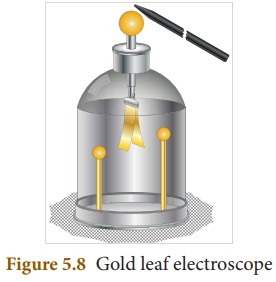 When the brass disc of the electroscope is touched by a charged object, electric charge gets transferred to the gold leaf through the rod. This results in gold leaves moving away from each other. This happens because both the leaves have similar charges.

Transfer of charge from one object to another is called charging. In case of the gold leaves, charge is transferred through the brass rods.

The gold leaves resume their normal position after some time. This happens because they lose their charge. This process is called electrical discharge. The gold leaves would also be discharged when someone touches the brass rod with bare hands. In that case, the charge is transferred to the earth through the human body.