Depicting larvae as largely passive greatly oversimplifies their behavioral capabilities, which diversify as they grow older.

Depicting larvae as largely passive greatly oversimplifies their behavioral capabilities, which diversify as they grow older (Noakes & Godin 1988). Making meaningful behavioral observations on very small, transparent larvae is understandably difficult, but successes point out the dynamics of larval development and the interdependence of morphology, physiology, and behavior.

Anatomical and behavioral development of Atlantic salmon during embryonic life and the first 2 months after hatching. Note that even embryos are capable of avoiding aversive stimuli via fin and body movements. “Emergence” refers to yolk sac larvae moving up out of the gravel of the nest. From Huntingford (1993), after Abu-Gideiri (1966) and Dill (1977b), used with permission.

Larvae of reef fish swim actively, orienting to reefs and currents while moving vertically to remain in particular water masses (e.g., Paris & Cowen 2004). Atlantic salmon larvae hatch from eggs buried in gravel, and the larvae remain in the gravel for almost another month. Even during this early period, obvious behavioral responses occur (Fig. 9.9). The larvae can make coordinated swimming movements involving both body and fins. A general geopositive and photonegative response, moving them down and away from light, keeps them buried. They also orient toward water currents. Emergence occurs as these responses reverse to photopositive and geonegative, causing them to swim up and out of the gravel, but still into the current. They almost immediately react to food and interact with conspecifics, nipping at both, which helps obtain food and drive away potential competitors. They are also capable of swimming away if nipped.

The larvae of coral reef fishes are also being found to display surprisingly complex behavioral repertoires, especially as the time comes for them to drop out of the plankton and settle onto reefs. Surgeonfish larvae only 28 mm long that have just settled from the plankton can school, can use topographic reef features to avoid strong currents, can avoid predators, and can swim actively against currents as strong as 15 cm/s (Sancho et al. 1997). Kaufman et al. (1992) made behavioral observations of the larvae of 68 Caribbean reef species. These larvae, referred to as transition juveniles, were just settling onto reefs. Almost half of the species showed strong habitat specificity with respect to where they actually settled, and this specificity differed among species. Additionally, many species were able to prolong the settlement period for several days or even weeks while they apparently sought out appropriate habitats. Specificity of settlement habitat and species differences, even within families, has been shown in transition juveniles of other groups at other locales (e.g., Vigliola & Harmelin-Vivien 2001; Leis & Carson-Ewart 2002a). This stage in the life of reef larvae had generally been viewed as something of a parachute drop, with larvae exercising minimal if any habitat choice. In fact, the settling stage can be more accurately portrayed as a bungee jump.

Swimming capabilities in fish larvae in general are heavily dependent on the relationship of body size to water viscosity (its “syrupiness”) and density (mass per unit volume). Small particles in a viscous medium such as water encounter

tremendous friction forces with which larger particles do not have to contend. Such Reynolds number considerations (Re =larval size xvelocity xwater density / water viscosity) mean that small larvae function at low Reynolds numbers (<1) and must swim sporadically and energetically, approaching 50 tail beats per second in anchovy and mackerel larvae, followed by long periods of rest. Larger larvae are able to swim and glide via inertial forces because viscosity is less of a factor (Purcell 1977; Hunter 1981;  Body size, scaling, and allometry).

Accuracy of feeding strikes has been shown to increase rapidly with development in cichlids as well as herrings, carp, and seabass. Herring and anchovy larvae feed more efficiently as they grow, improving their success rate from 3–10% shortly after hatching to 60–90% in the later stages of larval life (Blaxter 1969; Hunter 1981; Kamler 1991). In cichlids, many larvae and even juveniles are cared for by one or both parents. Many cichlid larvae form cohesive shoals almost immediately upon hatching, which obviously simplifies parental supervision. Some cichlid larvae feed on mucus produced by the parents and are attracted to the parents or to models with similar color patterns. By 25–40 days after hatching, shoals disband as individuals begin to charge, ram, and otherwise display at their siblings. Territory defense follows shortly thereafter (Huntingford 1993). Feeding in Mottled Sculpin larvae, Cottus bairdi, is strongly dependent on lateral line development. Sculpin as early as 6 days after hatching are able to detect vibrations produced by brine shrimp larvae in the dark, using free neuromasts that are located superfi cially on the skin of the head. With development, many of these neuromasts become enclosed in subdermal canals and sensitivity to minute disturbances, and ability to detect small prey, decreases (Jones & Janssen 1992).

More conventionally, ability to detect prey increases with age in most fishes, although some interesting specialized structures appear in larvae and then disappear during metamorphosis. In some weakly electric mormyrid elephantfishes of Africa, a special organ develops in larvae that produces electricity with a different discharge pattern than that shown in adults. This larval organ, which runs from the head to the caudal peduncle, degenerates after 2 months and is replaced by the adult caudal organ (Hopkins 1986).

More generally, many adult fishes have a duplex retina, one that contains both cones and rods (see  Vision). Cones function primarily by day, rods by night. The eye as it initially forms in embryos and larvae generally contains only cones, limiting feeding and other activities to daytime (e.g., herrings, many salmons and cichlids, soles). Herring do not develop rods until metamorphosis, which also coincides with the beginning of shoal formation, as  does the development of the lateral line, which is also involved in shoaling behavior. Many aspects of visual capability – in terms of sensitivity to light, size of objects detected, resolving power, dark adaptation, and range of wavelengths detected – improve with growth in a number of species as a function of increased lens diameter, increased retina area, the addition of rods or sometimes of cones, the diversifi cation and increased density of cones, and the addition of visual and screening pigments. Some fish larvae have unique visual structures not possessed by later stages. Stalked, elliptical eyes exist in larvae of 14 families of marine teleosts, including anguilliforms, notacanthiforms, salmoniforms, and myctophiforms (see Fig. 9.10A). Stalked eyes can increase 10-fold the volume of water viewable from any given spot, which could save energy spent searching for food as well as help in the detection of predators. Stalked eyes are lost during metamorphosis to the juvenile stage (Blaxter 1975; Weihs & Moser 1981; Hairston et al. 1982; Fernald 1984; Noakes & Godin 1988). 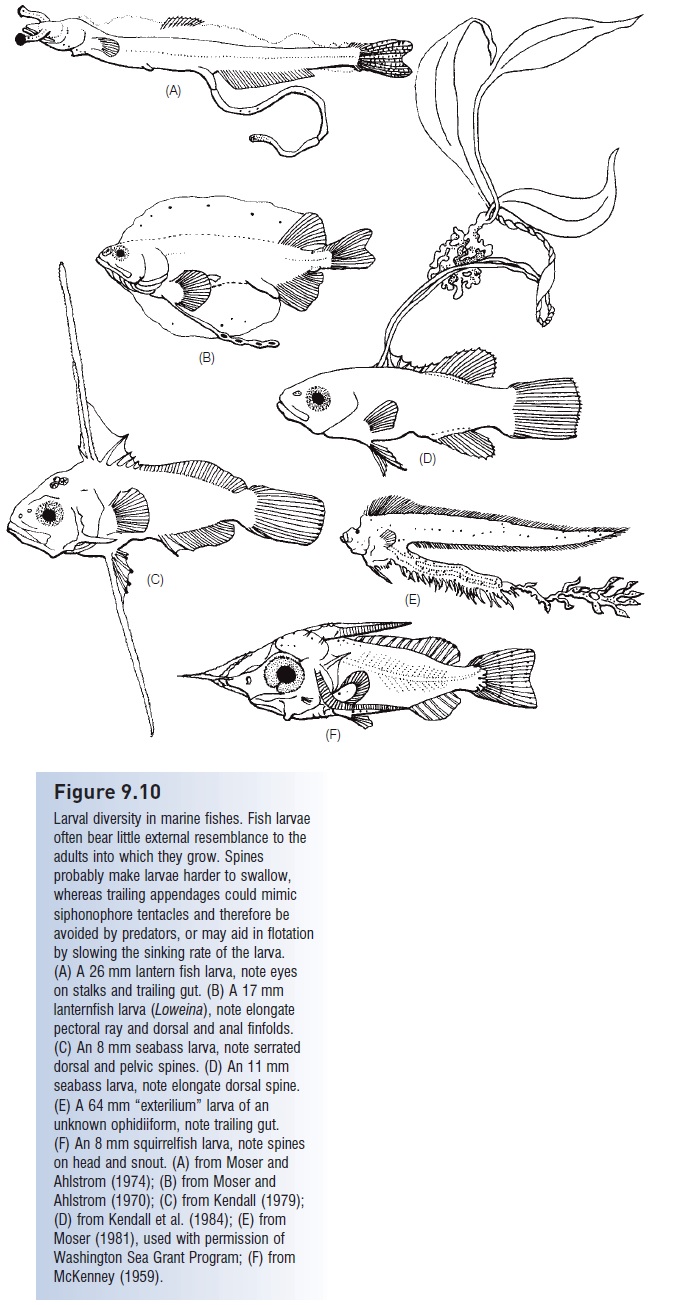 The larval phase is characterized by the onset of function of most of the organ systems an individual will use for the rest of its life, except for reproduction. The marked vulnerability of larvae to starvation and predation therefore decreases as these organ systems become functional. Not surprisingly, anterior and posterior parts of larvae grow faster than middle sections, reflecting the larva’s need to feed, respire, and escape (Fuiman 1983; Osse & van den Boogaart 1995). An obvious interrelationship exists between feeding ability and development of the jaws, digestive system, vision, and swimming musculature, and these linked systems develop in synchrony.

A less obvious pattern holds for the development of predator avoidance. In White Seabass, Atractoscion nobilis (Sciaenidae), larvae between 3 and 7 mm long (4–23 days old) show little difference in predator escape behavior. Only about 25% of larvae react to approaching predators, usually by a startle response involving Mauthner cells, which are a pair of large, early-developing interneurons that connect the hindbrain with motor neurons in the spinal column and cause the body to fl ex suddenly. Responses change markedly in slightly older fish. Between 7 and 10 mm (23–30 days), the visual and acoustic systems of the larvae improve markedly. Visual acuity and accommodation improve, the optic tectum of the brain where visual information is processed develops, the gas bladder inflates, and the number of free neuromasts on the head and body increases. Both gas bladder and neuromasts are involved in detection of sound or of water displacement, perhaps allowing the larva to sense predatory motion as well as its own movements better. As a result, White Seabass larvae become much more adept at avoiding ambushing and hovering predators such as juvenile White Seabass and flatfishes. This behavior is augmented by a change to a demersal existence, which reduces the threat of predation by fastswimming water column planktivores (anchovies, sardines, mackerel) to which they are still relatively vulnerable. Rapid development of neurosensory structures is therefore critical in the transition from a relatively passive target to a larva in which >75% actively avoid predators, over the course of less than 1 week (Margulies 1989). In herring (Clupea harengus) larvae, successful predator avoidance coincides with the appearance of lateral line neuromasts and the filling of the otic bulla with gas, both structures associated with hearing (Blaxter & Fuiman 1990).