Biologically, the larval stage or its equivalent is probably the most thoroughly studied period of the early life history of fishes.

Biologically, the larval stage or its equivalent is probably the most thoroughly studied period of the early life history of fishes. This results from the identifiability of larvae, their relative abundance, and their importance in determining the distribution and later abundance of many species, particularly those of commercial value.

Larval life generally begins as the fish hatches from the egg and switches from internal, yolk reserves to external, planktonic food sources. The free-swimming young may still have a large yolk sac and be termed a free embryo, eleutheroembryo, or yolk-sac larva until the yolk is absorbed. Fry is a nonspecific term often used for advanced larvae or early juveniles; swim-up stage often refers to free embryos or larvae that were initially in a nest but have grown capable of swimming above the nest.

The larval stage continues until development of the axial skeleton, fins, and organ systems is complete (Fig. 9.7). Median fin rays develop, first as short, fleshy interspinous rays; true fin rays and spines develop later between the interspinous rays. Scales develop, first along the lateral line near the caudal peduncle, then in rows dorsal and ventral to the lateral line, and then spread anteriorly (Fig. 9.8). Once the full complement of scales is attained, the number remains fixed. The end of the notochord, termed the

A recently hatched, marine teleost larva, as represented by a 6 mm clingfish, Gobiesox rhessodon. Note development of the mouth, eyes, median fin supports, and melanophores, and upward flexion of the notochord at the base of the tail. From Allen (1979).

urostyle, fl exes upwards and a triangular hypural plate develops just below it. Caudal rays grow posteriorly from the hypural plate elements. Characteristic larval pigmentation patterns develop, the eyes become pigmented, and the mouth and anus open and become functional. Until gill filaments develop, the larva relies on cutaneous respiration, largely involving oxygen absorption across the thin walls of the primordial finfolds. The circulatory system is at first relatively open, and corpuscle-free blood is pumped through sinuses around the yolk and between the fin membranes (Russell 1976). 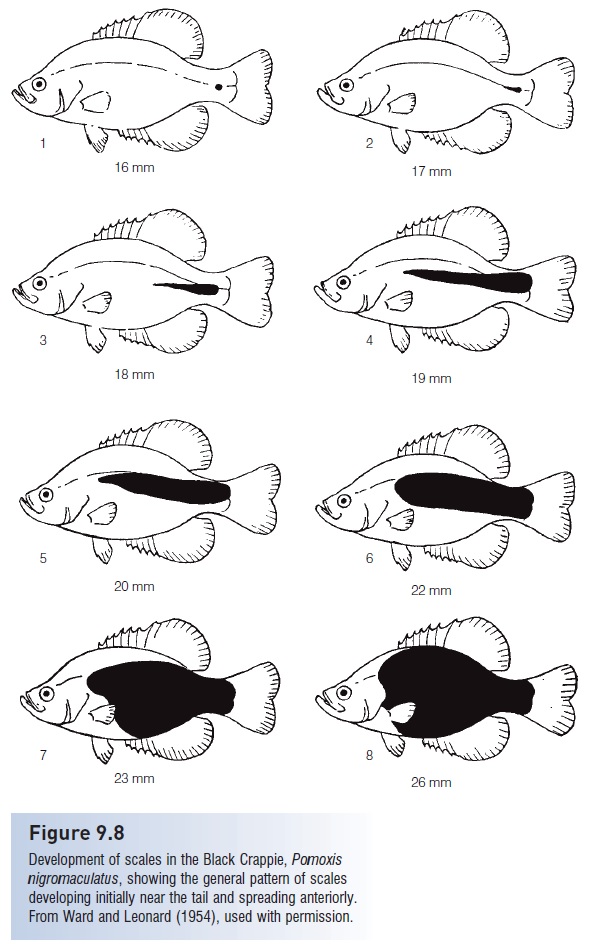 Pelagic larvae, which are particularly common among marine fishes, also characterize lake and river species in fresh water (e.g., whitefishes, temperate basses, centrarchid sunfishes, percid pikeperches and perches). Larval periods in pelagic larvae vary widely in duration, from 1 to 2 weeks in sardines and scorpaenid rockfishes, to about 1 month in many coral reef species, to several months or even years in anguillid eels. A lengthy larval existence undoubtedly aids in the dispersal of these young to appropriate habitats (see below, Getting from here to there: larval transport mechanisms). Stream fishes, such as many minnows, darters, and sculpins, generally have demersal larvae with short larval periods. Young fish remain on the bottom among rocks or vegetation until they develop reasonable swimming abilities, reflecting the turbulent conditions of streams that can injure larvae or carry them downstream to suboptimal habitats such as lakes or the ocean. Once muscular and skeletal features are formed, many are captured in stationary driftnets, indicating a juvenile dispersal phase, as opposed to larval dispersal in pelagic, lake, and river species. Larvae of some rocky intertidal fishes (e.g., sculpins, pricklebacks, gunnels, clingfishes) may not disperse offshore but instead actively spend their entire larval existence within 5 m of the shoreline, which could guarantee their return to suitable habitat (Marliave 1986).

Larval periods are bypassed or very short in live-bearing fishes and in fishes that still possess considerable yolk reserves after hatching, such as salmonids. Arguably, no larval or juvenile phase exists in the viviparous Dwarf Perch, Micrometrus minimus, males of which are sexually mature when born (Schultz 1993). Development that involves a larval phase with distinct metamorphosis into the juvenile stage is termed indirect. Direct development occurs if a larval stage is very brief or not definable, i.e., the fish hatches into a miniature but immature adult, as in many coastal marine forms and in many catfishes, salmoniforms, and cottids (Youson 1988).