After fertilization, the chorion of the egg stiffens, a process known as water hardening, which serves to protect the developing embryo. Embryogenesis in fishes proceeds as inmost vertebrates.

After fertilization, the chorion of the egg stiffens, a process known as water hardening, which serves to protect the developing embryo. Embryogenesis in fishes proceeds as inmost vertebrates. The embryo develops on top of the yolk; yolk is concentrated at the vegetative pole and the fertilized egg is considered telolecithal. In hagfishes, elasmobranchs, and teleosts, cleavage is meroblastic in that cell division occurs in the small cap of cytoplasm that will develop into a fish, but not in the yolk. Lampreys have holoblasticcleavage, whereas bowfin, gar, and sturgeon exhibit an intermediate form, termed semiholoblastic. Cell division and differentiation continue in fairly predictable sequences, with many interspecific differences in the timing of appearance of different structures (Fig. 9.6) (see Lagler et al. 1977 and Lindsey 1988 for more thorough discussions of fish embryology). 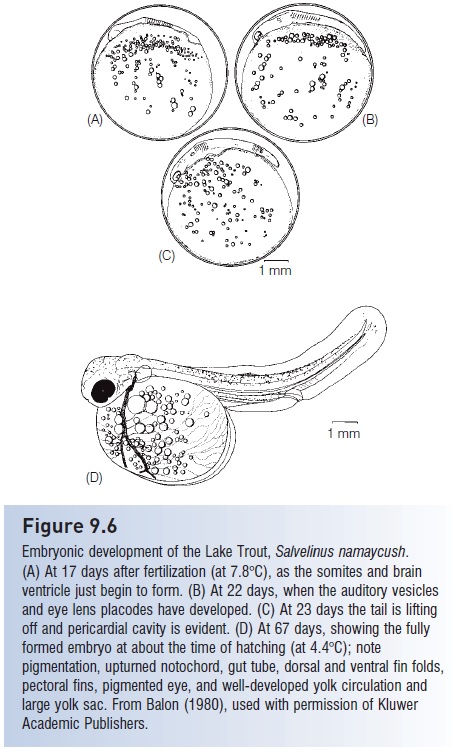 Embryonic development of the Lake Trout, Salvelinus namaycush. (A) At 17 days after fertilization (at 7.8°C), as the somites and brain ventricle just begin to form. (B) At 22 days, when the auditory vesicles and eye lens placodes have developed. (C) At 23 days the tail is lifting off and pericardial cavity is evident. (D) At 67 days, showing the fully formed embryo at about the time of hatching (at 4.4°C); note pigmentation, upturned notochord, gut tube, dorsal and ventral fin folds, pectoral fins, pigmented eye, and well-developed yolk circulation and large yolk sac. From Balon (1980), used with permission of Kluwer Academic Publishers.

Organs and structures that are at least partially developed in many embryos prior to hatching include: body somites, which are forerunners of muscle blocks; kidney ducts; neural tube; optic and auditory vesicles; eye lens placodes; head and body melanophores; a beating heart and functioning circulatory system, much of which is linked to circulatory vessels in the yolk; pectoral fins and median fin folds but not the median fins themselves; opercular covers, but not gill arches and filaments; otoliths; lateral line sense organs below which scales will later form; and the notochord. By the time of hatching, the head and the tail have lifted off the yolk, the mouth and jaws are barely formed, fin rays may be present in the caudal fin, but little if any skeletal ossifi cation has occurred. The nonfunctional gut is a simple, straight tube and the gas bladder is evident as a small evagination of the gut tube. Advanced embryos curl around on themselves, their bodies making more than a full circle. In fish that hatch at a relatively undeveloped stage,the eye is seldom pigmented, maintaining the transparency of the helpless, newly hatched, free embryo with its very large and cumbersome yolk sac (Blaxter 1969; Hempel 1979; Matarese & Sandknop 1984; Lindsey 1988).

Just prior to emergence, hatching gland cells on the head of some fishes secrete proteolytic enzymes that aid in breaking down the chorionic membrane or “egg shell”. Thrashing movements of the tail and body aid in the hatching process. The time spent in the egg prior to hatching varies greatly among species, from around 12 h in some coral reef fishes; to a few days in Striped Bass, centrarchid sunfishes, some cichlids, and surgeonfishes; to a week or two in smelts, darters, mackerels, and flatfishes; to several weeks or months in salmons and sharks. In all fishes studied, hatching time decreases with increasing temperature (Blaxter 1969; Kendall et al. 1984). “Hatching” is a convenient landmark during early development, but it should be noted that the exact developmental stage at which the embryo frees itself from the egg varies greatly among species and even varies within species depending on temperature and oxygen content of the water, among other factors (e.g., Balon 1975a). Species identifications of unfertilized or recently fertilized eggs can be a difficult task, often requiring electron microscopy. Embryos, especially those in advanced stages of development, are considerably easier to identify. Speciesspecific patterns of pigmentation often develop on the body and finfolds, particularly of marine species (e.g., codfishes, flatfishes). Other characters of use in identification include the general morphology of the head, gut, and tail, the number of body myomeres, and the existence of elongate or otherwise precocially developed fin rays (e.g., flyingfishes, ribbonfishes, sandfishes, weeverfishes) (Matarese & Sandknop 1984).

Species can be assigned to categories based on where embryonic development occurs and whether developing embryos are dependent on maternal versus yolk provisioning. If the mother releases eggs that then rely on yolk for nutrition, the species is oviparous or egg-laying, as is the case in chimaeras, some sharks and skates, and most bony fishes. If the young develop inside the mother and the mother provides nutrition via a placental connection, secretions, or additional eggs and embryos eaten by developing young, the species is viviparous or live-bearing. The young of viviparous fishes are generally born as juveniles, having bypassed a free larval stage. Viviparity characterizes about half of the 1200 species of Chondrichthyes and about 500 (2%) of the 25,000+species of bony fishes (most of those with internal fertilization mentioned earlier). “Virtually every known form of vertebrate viviparity and possible maternal–fetal relationship may be found in fishes” (Wourms 1988, p. 4). Some researchers recognize ovoviviparity, whereby young develop inside the mother but depend primarily on the yolk that was laid down during oogenesis (e.g., some sharks, scorpaenids, zoarcid eelpouts, and arguably, guppies). However, many intermediate conditions exist involving both yolk and maternal secretions, blurring the distinctions and making ovoviviparity difficult to define (Breder & Rosen 1966; Hoar 1969; Kendall et al. 1984; Wourms 1988; Nelson 1994). Although live birth usually follows internal fertilization, the two are not synonymous. Many elasmobranchs have internal fertilization but lay eggs which develop for many months outside the female. The priapium, a bizarre and complex organ of male phallostethids and neostethids, is used for holding the female during copulation and for fertilizing eggs just before they are laid (Breder & Rosen 1966; Nelson 2006).