One of the drawbacks of the Freundlich adsorption isotherm is that it fails at high pressure of the gas.

Adsorption Isotherm : One of the drawbacks of the Freundlich adsorption isotherm is that it fails at high pressure of the gas. Langmuir derived an adsorption isotherm on theoretical considerations based on kinetic theory of gases. This is named as the Langmuir adosrption isotherm. This isotherm is based on the assumption that every adsorption site is equivalent and that the ability of a particle to bind there is independent of whether or not nearby sites are occupied. In his derivation, Langmuir considered adsorption to consist of the following two opposing processes :

Asorption of the gas molecules on the surface of the solid.

Desorption of the adsorbed molecules from the surface of the solid.

Langmuir believed that eventually a dynamic equilibrium is established between the above two opposing processes. He also assumed that the layer of the adsorbed gas is only one molecule thick i.e., unimolecular. Since such type of adsorption is obtained in the case of chemisorption. Langmuir adsorption isotherm works particularly well for chemisorption.

The Langmuir adsorption isotherm is represented by the relation.

where a and b are two Langmuir parameters. At very high pressure, the above isotherm acquires the limiting form.

In order to determine the parameters a and b, Eq. (17.1) may be written in its inverse form:

A plot of m/x against 1/p gives a straight line the slope and intercept equal to 1/a and b/a, respectively. Thus, both parameters can be determined.

The Langmuir isotherm, in the form of Eq. (17.1) is generally more successful in interpreting the data than the Freundlich isotherm when a monolayer is formed. A plot of x/m versus p is shown in (Fig17.7). At low pressures, according to Eq. (17.3), pressure x/m increases linearly with p. At high pressure according to Eq. (17.2), x/m becomes constant i.e. the surface is fully covered and change in pressure has no effect and no further adsorption takes place, as is evident from Fig. 17.7. 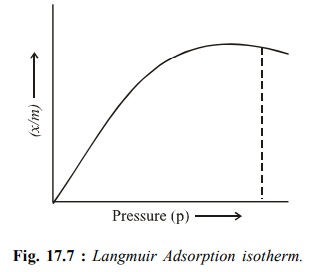 Adsorption occurs from solutions also. The solute gets adsorbed on the surface of a solid adsorbent. Charcoal, a good adsorbent, is often used to adsorb acetic acid, oxalic acid and organic dyestuffs from their aqueous solutions.

The extent of adsorption, x/m depends upon the concentration c of the solute. Freundlich isotherm is applicable to adsorption from solutions when concentration is used in place of pressure as shown below.

The plot of log x/magainst c is also a straight line, provided very low and very high concentrations are avoided.