The adsorption isotherm of a gas which is adsorbed on a solid.

(i) Adsorption of Gases 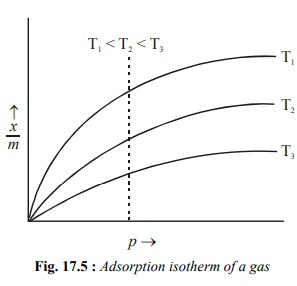 Freundlich gave an empirical mathematical relationship between the extent of adsorption (x/m) and the equilibrium pressure (p) of the gas as :

In this relation k is a constant at a given temperature and depends upon the nature of the adsorbate and adsorbent. The value of n changes with pressure. It is 1 at low pressures and increases with pressure. The relationship is valid at a constant temperature. Therefore, it is called Freundlich Adsorption Isotherm. On taking logarithm of the above equation, we get

This is an equation of a straight line and a plot of log x/m against log p should be a straight line with slope 1/n as depicted in Fig. 17.6. In actual practice, a straight line is obtained provided the data at very low and very high pressures is neglected. 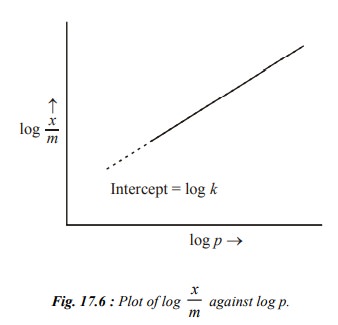