Ohm's law is applicable only for simple circuits. For complicated circuits, Kirchoff's laws can be used to find current or voltage. There are two generalised laws : (i) Kirchoff's current law (ii) Kirchoff's voltage law

Ohm’s law is applicable only for simple circuits. For complicated circuits, Kirchoff’s laws can be used to find current or voltage. There are two generalised laws : (i) Kirchoff’s current law (ii) Kirchoff’s voltage law

Kirchoff’s current law states that the algebraic sum of the currents meeting at any junction in a circuit is zero. 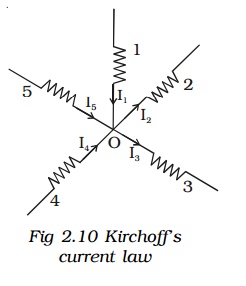 Both cells E1 and E3 send currents in clockwise direction.

For the closed loop ABEFA

Negative sIgn in E2 indicates that it sends current in the anticlockwise direction.

As an illustration of application of Kirchoff’s second law, let us calculate the current in the following networks. 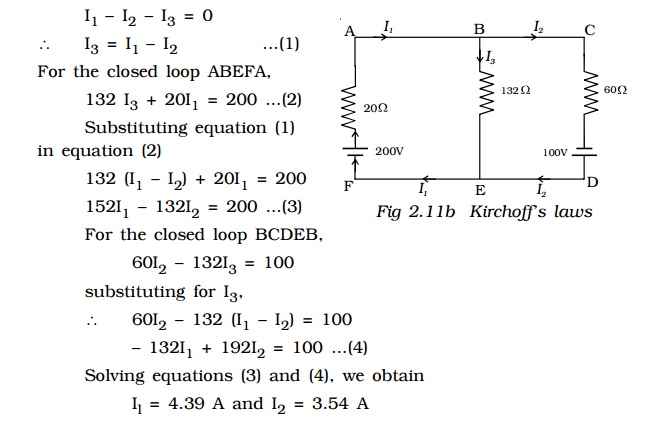 Taking the current in the clockwise direction along ABCDA as positive (FIg 2.11c)

The negative sign indicates that the current flows in the anticlockwise direction.

An important application of Kirchoff’s law is the Wheatstone’s bridge (FIg 2.12). Wheatstone’s network consists of resistances P, Q, R and S connected to form a closed path. A cell of emf E is connected between points A and C. The current I from the cell is divided into I1, I2, I3 and I4 across the four branches. The current through the galvanometer is Ig. The resistance of galvanometer is G. 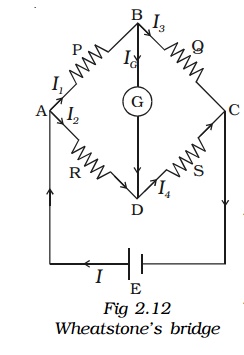 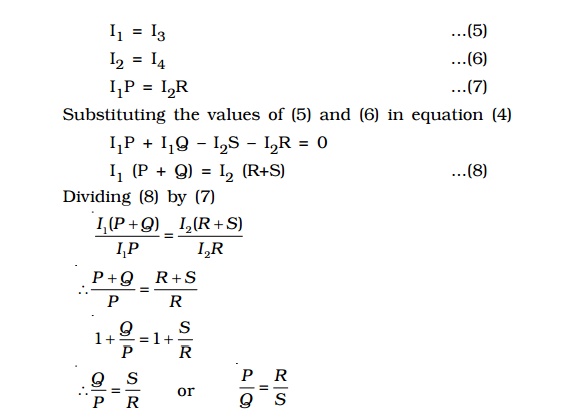 This is the condition for bridge balance. If P, Q and R are known, the resistance S can be calculated.

Metre bridge is one form of Wheatstone’s bridge. It consists of thick strips of copper, of negligible resistance, fixed to a wooden board. 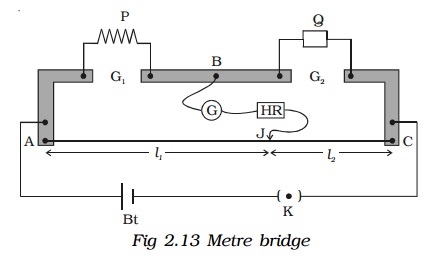 There are two gaps G1 and G2 between these strips. A uniform manganin wire AC of length one metre whose temperature coefficient is low, is stretched along a metre scale and its ends are soldered to two copper strips. An unknown resistance P is connected in the gap G1 and a standard resistance Q is connected in the gap G2 (Fig 2.13). A metal jockey J is connected to B through a galvanometer (G) and a high resistance (HR) and it can make contact at any point on the wire AC. Across the two ends of the wire, a Leclanche cell and a key are connected.

Adjust the position of metal jockey on metre bridge wire so that the galvanometer shows zero deflection. Let the point be J. The portions AJ and JC of the wire now replace the resistances R and S of Wheatstone’s bridge. Then

Though the connections between the resistances are made by thick copper strips of negligible resistance, and the wire AC is also soldered to such strips a small error will occur in the value of l1/l2 to the end resistance. This error can be eliminated, if another set of readings are taken with P and Q interchanged and the average value of P is found, provided the balance point J is near the mid point of the wire AC.

The specific resistance of the material of a wire is determined by knowing the resistance (P), radius (r) and length (L) of the wire using the expression

4.  Determination of temperature coefficient of resistance

If R1 and R2 are the resistances of a given coil of wire at the temperatures t1 and t2, then the temperature coefficient of resistance of the material of the coil is determined using the relation,

The Potentiometer is an instrument used for the measurement of potential difference (Fig 2.14). It consists of a ten metre long uniform wire of B manganin or constantan stretched in ten segments, each of one metre length. The segments are stretched parallel to each other on a horizontal wooden board. The ends of the wire are fixed to copper strips with binding screws. A metre scale is fixed on the board, parallel to the wire. Electrical contact with wires is established by pressing the jockey J. 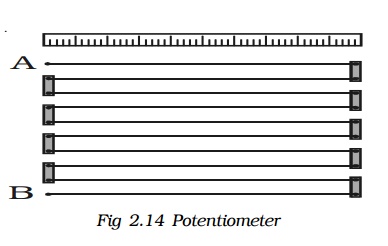 A battery Bt is connected between the ends A and B of a potentio- meter wire through a key K. A steady current I flows through the potentiometer wire (Fig 2.15). This forms the primary circuit. A primary cell is connected in series with the positive terminal A of the potentiometer, a galvanometer, high resistance and jockey. This forms the secondary circuit. 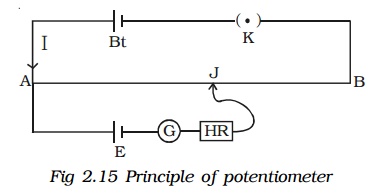 since I and r are constants, E α l

Hence emf of the cell is directly proportional to its balancing length. This is the principle of a potentiometer.

2.  Comparison of emfs of two given cells using potentiometer 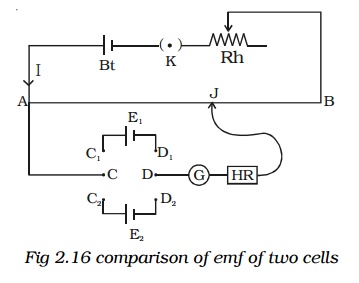 Let I be the current flowing through the primary circuit and r be the resistance of the potentiometer wire per metre length.

The DPDT switch is pressed towards C1, D1 so that cell E1 is included in the secondary circuit. The jockey is moved on the wire and adjusted for zero deflection in galvanometer. The balancing length is l1. The potential difference across the balancing length l1 = Irll. Then, by the principle of potentiometer,

If emf of one cell (E1) is known, the emf of the other cell (E2) can be calculated using the relation.

3. Comparison of emf and potential difference

2.     The emf is independent of external resistance of the circuit, whereas potential difference is proportional to the resistance between any two points.