JTable is a component that displays rows and columns of data. You can drag the cursor on column boundaries to resize columns.

JTable is a component that displays rows and columns of data. You can drag the cursor on column boundaries to resize columns. You can also drag a column to a new position. Depending on its configuration, it is also possible to select a row, column, or cell within the table, and to change the data within a cell. JTable is a sophisticated component that offers many more options and features than can be discussed here. (It is perhaps Swing’s most complicated component.) However, in its default configuration, JTable still offers substantial functionality that is easy to use—especially if you simply want to use the table to present data in a tabular format. The brief overview presented here will give you a general understanding of this powerful component.

Like JTree, JTable has many classes and interfaces associated with it. These are packaged in javax.swing.table.

At its core, JTable is conceptually simple. It is a component that consists of one or more columns of information. At the top of each column is a heading. In addition to describing the data in a column, the heading also provides the mechanism by which the user can change the size of a column or change the location of a column within the table. JTable does not provide any scrolling capabilities of its own. Instead, you will normally wrap a

TableColumnModel. JTable is defined in terms of columns, and it is TableColumnModel that specifies the characteristics of a column. These two models are packaged in javax.swing.table. The third model determines how items are selected, and it is specified by the ListSelectionModel, which was described when JList was discussed.

A JTable can generate several different events. The two most fundamental to a table’s operation are ListSelectionEvent and TableModelEvent. A ListSelectionEvent is generated when the user selects something in the table. By default, JTable allows you to select one or more complete rows, but you can change this behavior to allow one or more columns, or one or more individual cells to be selected. A TableModelEvent is fired when that table’s data changes in some way. Handling these events requires a bit more work than it does to handle the events generated by the previously described components and is beyond the scope of this book. However, if you simply want to use JTable to display data (as the following example does), then you don’t need to handle any events.

Here are the steps required to set up a simple JTable that can be used to display data:

Create an instance of JTable.

Create a JScrollPane object, specifying the table as the object to scroll.

Add the table to the scroll pane.

The following example illustrates how to create and use a simple table. A one-dimensional array of strings called colHeads is created for the column headings. A two-dimensional array of strings called data is created for the table cells. You can see that each element in the array is an array of three strings. These arrays are passed to the JTable constructor. The table is added to a scroll pane, and then the scroll pane is added to the content pane. The table displays the data in the data array. The default table configuration also allows the contents of a cell to be edited. Changes affect the underlying array, which is data in this case.

System.out.println("Can't create because of " + exc);

//Add the table to a scroll pane.

Output from this example is shown here: 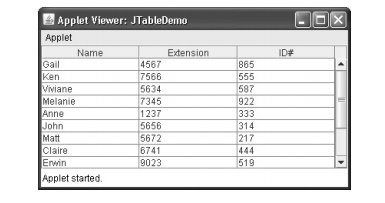