In Swing, the basic list class is called JList. It supports the selection of one or more items from a list. Although the list often consists of strings, it is possible to create a list of just about any object that can be displayed.

In Swing, the basic list class is called JList. It supports the selection of one or more items from a list. Although the list often consists of strings, it is possible to create a list of just about any object that can be displayed. JList is so widely used in Java that it is highly unlikely that you have not seen one before.

In the past, the items in a JList were represented as Object references. However, beginning with JDK 7, JList was made generic and is now declared like this:

Here, E represents the type of the items in the list.

This creates a JList that contains the items in the array specified by items.

JList is based on two models. The first is ListModel. This interface defines how access to the list data is achieved. The second model is the ListSelectionModel interface, which defines methods that determine what list item or items are selected.

Although a JList will work properly by itself, most of the time you will wrap a JList inside a JScrollPane. This way, long lists will automatically be scrollable, which simplifies GUI design. It also makes it easy to change the number of entries in a list without having to change the size of the JList component.

A JList generates a ListSelectionEvent when the user makes or changes a selection. This event is also generated when the user deselects an item. It is handled by implementing ListSelectionListener. This listener specifies only one method, called valueChanged( ), which is shown here:

By default, a JList allows the user to select multiple ranges of items within the list, but you can change this behavior by calling setSelectionMode( ), which is defined by JList. It is shown here:

Here, mode specifies the selection mode. It must be one of these values defined by

Instead of obtaining the index of a selection, you can obtain the value associated with the selection by calling getSelectedValue( ):

It returns a reference to the first selected value. If no value has been selected, it returns null. The following applet demonstrates a simple JList, which holds a list of cities. Each time

// Create an array of cities.

System.out.println("Can't create because of " + exc);

//Set the preferred size of the scroll pane.

//Make a label that displays the selection.

//Get the index of the changed item.

// Display selection, if item was selected. 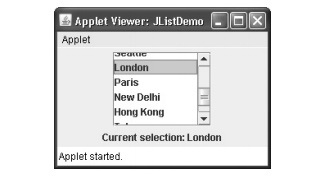